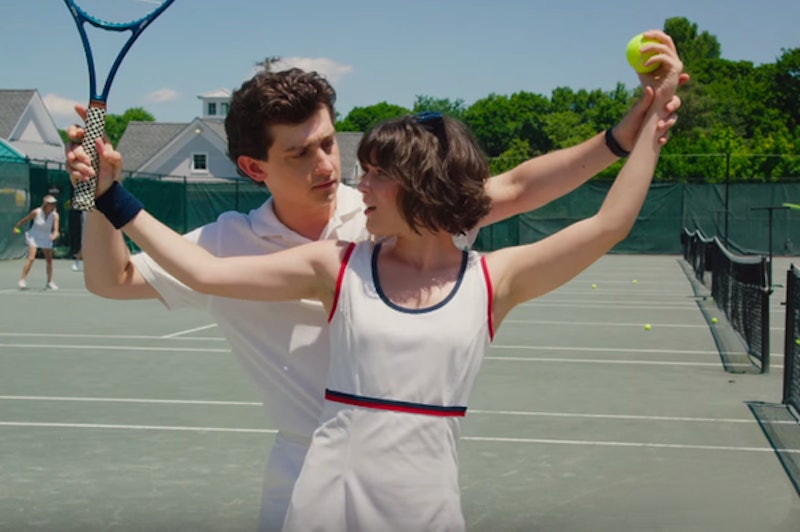 The '80s are, like, having a totally radical moment right now— at least when it comes to streaming television. Earlier this year, we got Wet Hot American Summer: First Day of Camp, and starting Oct. 9, Amazon will stream all 10 episodes of the '80s-set Red Oaks. Wet Hot American Summer didn't have a foothold in reality — it exaggerated its '80sness to the extreme, right down to the three pastel popped collars on Josh Charles' costume. Will Red Oaks follow suit, or is it going for a more realistic vibe? Is Amazon's Red Oaks based on a true story?

The best way to describe it is to say Red Oaks was kindasorta inspired by a true story. Gregory Jacobs, the show's co-creator — and director of Magic Mike XXL, (Mmmmmm) — explained its origins to Hitfix. "I worked as a tennis pro at various New Jersey country clubs while I was going to college in NYC," he told the website. "'Loosely inspired' is the best way to describe Red Oaks [in] relation to my actual experiences as a tennis pro. A majority of the characters are invented by [co-creator Joe Gangemi] and I." So, this show isn't married to reality. If it's not rooted in Jacobs' life, what kinds of influences went into the making of Red Oaks?

You can't make anything set in the '80s without thinking about the huge movies at the time. "Flamingo Kid and Caddyshack were certainly on our minds as we first conceived Red Oaks—mostly as benchmarks of excellence," Jacobs says in the same Hitfix interview. "And we love that Jennifer Grey responded to the part of the protagonist's mother, because as you point out she starred in one of the most iconic '80s 'resort' films." I doubt we'll see the main character doing the Dirty Dancing power lift, but we can always hope.

And Maybe Some Movies That Are Even Older

The creator of the show may have been thinking of Patrick Swayze, but its star, Craig Roberts, feels a little more like Dustin Hoffman. "It's like The Graduate ," he told Red Carpet News TV. "He's trying to figure out what he wants to do with his life." I know The Graduate meets Caddyshack sounds like the weirdest mash-up ever, but I'm sure Red Oaks makes it work.

I know that, when we talk about TV, we usually discuss creators, showrunners, and actors more often than directors, but there's a huge bench of talent at work directing Red Oaks — and almost all of them have amazing coming-of-age stories under their belts. How amazing? Clueless director Amy Heckerling lent her skills to the show. So did David Gordon Green, who's probably best known for movies like Pineapple Express, but his coming-of-age movies like George Washington, All the Real Girls, and Undertow are even better. And, if anyone saw Ned Rifle, co-starring Aubrey Plaza, its director, Hal Hartley, is on the roster as well. It's like a who's who of indie auteurs back there.

The Genre Of Least Respect

Credit another behind-the-scenes boldface name — executive producer Steven Soderbergh — with getting in an homage to a much-maligned genre of storytelling. "[Soderberg] said to me, 'Dude, you have to do a body-swap episode, come on, it’s so ’80s,'” Jacobs told Decider. "I’m like...let’s push it down far enough so it’s not too early in the series and the audience is invested emotionally enough. Let’s figure out how to weave that in." I am, in '80s parlance, totally psyched for this episode.

Dust off those mixtapes-on-cassette — you'll want to revisit them. "I had a really good Spotify playlist...a five-hour long playlist I would work to," Gangemi said in the same Decider interview. "Part of the fun of was picking things that weren’t the most popular but that we loved," Jacobs added. "It was really fun to layer in the music of that period." No word on whether or not Amazon plans on putting out a soundtrack album, but it totally should so we can get the full Red Oaks experience when it premieres on Oct. 9.

More like this
Gerard Butler Insisted On Adding This Pivotal Scene To 'Plane'
By Catharina Cheung
Jemima Khan Used Her Own Life As Inspo For 'What’s Love Got To Do With It?'
By Darshita Goyal
ITV's 'Maternal' Was Inspired By A Very Simple – & Unanswerable – Question
By Maxine Harrison
'Boiling Point's TV Sequel Is Set To Deliver A “Rollercoaster Of Emotions”
By Catharina Cheung and Sophie McEvoy
Get Even More From Bustle — Sign Up For The Newsletter
From hair trends to relationship advice, our daily newsletter has everything you need to sound like a person who’s on TikTok, even if you aren’t.