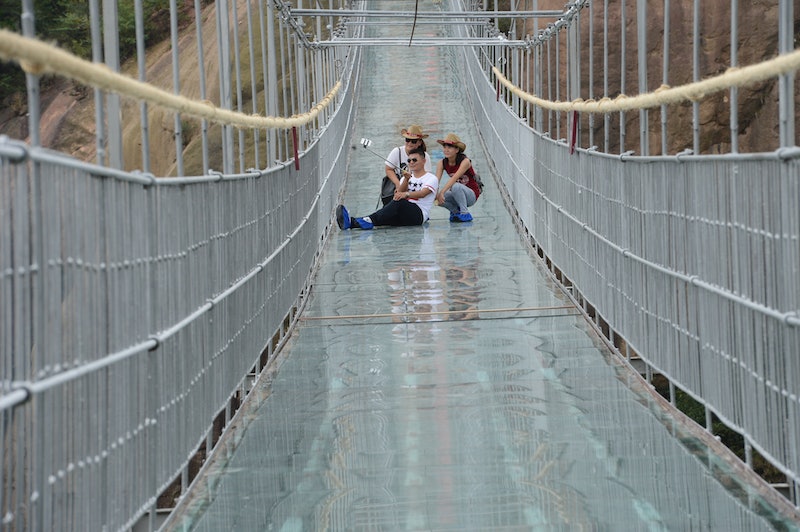 It was bound to happen. The already absolutely terrifying glass bridge in China has cracked. Cracked! I read the news and gasped. Now, bear in mind that the crack that appeared on Monday has not impacted the safety of the bridge — personally, I still don't quite understand how it's safe at all in the first place — but suffice it to say that people who were walking the bridge at the time were entirely freaked out. Who wouldn't be? Technically the bridge may be totally safe, but a crack in the glass of a 3,500-foot bridge just doesn't look or sound great.

Of course I am coming to this with my own bias of a relatively intense fear of heights (Read: You couldn't pay me to step even one foot on that glass bridge), and I get that some people live for the thrill of walking on a bridge that's suspended 590 feet off the ground and staring directly down into a gorge. But given the reactions from those who were on the bridge when the crack occurred, it seems that even the most daring of the daredevils were completely terrified.

Just looking at any of the photos (with or without a compromise in the structural integrity!) make me feel borderline nauseated, so acrophobes beware!

Even before the bridge cracked, people were rightfully nervous to look down a massive drop for over 1,000 feet of walking. Yikes.

I would 100 percent be that guy who's getting dragged.

In fog thick enough to warrant an umbrella?! GO BACK!

And apparently, some other visitors were quite chill about the whole thing. There is no time for selfies, people! Just get to the other side!!

And THIS is why I'm afraid of heights. Nope. Nope nope nope nope. Yes, that's the crack in the bridge. Which I would call more of a SHATTER than anything.

The bridge reportedly cracked under a tourist's foot as they were walking. The Washington Post reported that the crack was supposedly caused when a tourist dropped a stainless steel cup on the bridge.

Officials in Mount Yuntai, where the bridge is located, stated that the crack "does not impact safety." Well, try telling that to the tourists who reportedly ran screaming to get off as soon as they could after they heard the crack forming.

The bridge was reportedly closed after the crack and the subsequent panic from tourists. I wonder how many will be eager to visit now...

More like this
David Tennant’s Transformation In ITV’s 'Litvinenko' Is Astonishing
By Sophie McEvoy
The 8 Best Walking Shoes For Metatarsalgia, According To A Podiatrist
By Lauren Moison
Anguilla Is The Under-The-Radar Caribbean Destination You Need To Visit
By Rachel Lapidos
Dolly Parton Joins TikTok & Debuts A Song About Baking
By Jake Viswanath
Get Even More From Bustle — Sign Up For The Newsletter