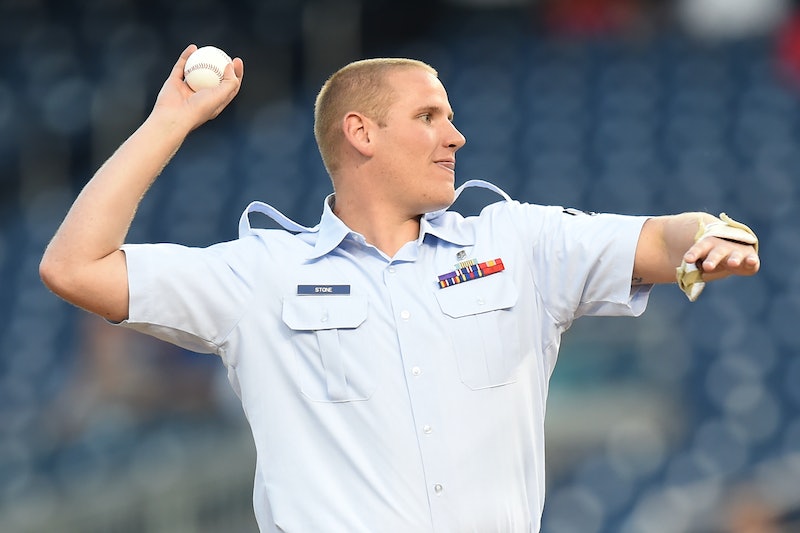 Spencer Stone was repeatedly stabbed in Sacramento, California, on Wednesday night, according to NBC News. Who is Spencer Stone? The U.S. Air Force Airman was one of three Americans who helped stop an attack by an armed gunman on a French train in August. The Air Force said in a statement that Stone is alive and in stable condition, but it wouldn't offer any other information about the incident, according to NBC.

Stone, who is from Sacramento, was reportedly stabbed at about 12:45 a.m. Thursday near 21st and K Streets, near several popular bars in midtown Sacramento, local NBC affiliate KCRA reported. A fight in the street apparently led to Stone being stabbed multiple times in the torso. Investigators closed off the area until about 6 a.m. Thursday. A man and a woman were questioned by police, but police have not said whether they've taken anyone into custody.

In August, Stone tackled Morocco-born Ayooub El-Khazaani, who boarded a Paris-bound train with a suitcase full of weapons and opened fire. Stone and his two friends, college student Anthony Sadler and Oregon National Guardsman Aleksander Skarlatos, subdued the gunman and were awarded France's highest honor, the Legion d'Honneur, by French President Francois Hollande for their heroic actions, according to NBC News.

During the fight, El-Khazaani cut Stone on his head, neck, and arm with a box cutter, but Stone still managed to help another passenger, Mark Moogalian, who had been shot when he tried to pry a rifle away from El-Khazaani, according to TODAY. Stone helped slow Moogalian's bleeding and calmed him down once El-Khazaani was subdued. Moogalian finally got the chance to thank Stone for saving his life in September on TODAY:

I remember it very well because [Stone] was talking to me trying to keep me from losing consciousness, and said after this is over we'll go get a beer. He just kept me there. The sound of his voice and also the sound of my wife's (voice) just kept me there, kept me alive and gave me hope. ... Spencer, I'd just like to tell you again, thanks for saving my life. I know I've said it already, but I'll never forget it, and I think you still owe me that beer, so we'll have to get that set up somehow.

Stone reassured Moogalian that they would definitely get that beer, but "under different circumstances this time," according to TODAY. Stone said that focusing on Moogalian was his first priority once he and his friends subdued El-Khazaani, because he didn't want Moogalian's wife, Isabelle, to see her husband die:

I didn't feel any of my injuries, I was just really focused on Mark and I just didn't want him to die, especially with Isabelle right there.

After the attack, Stone told NBC that he was acting on his survival instincts when he tackled El-Khazaani:

He seemed like he was willing to fight to the end — so were we.

Investigators in Sacramento initially didn't think Stone would survive his wounds, but the Air Force has held that he is in stable condition, reports NBC Bay Area. On Thursday afternoon, Skarlatos tweeted "everybody send prayers out to the stone family today."