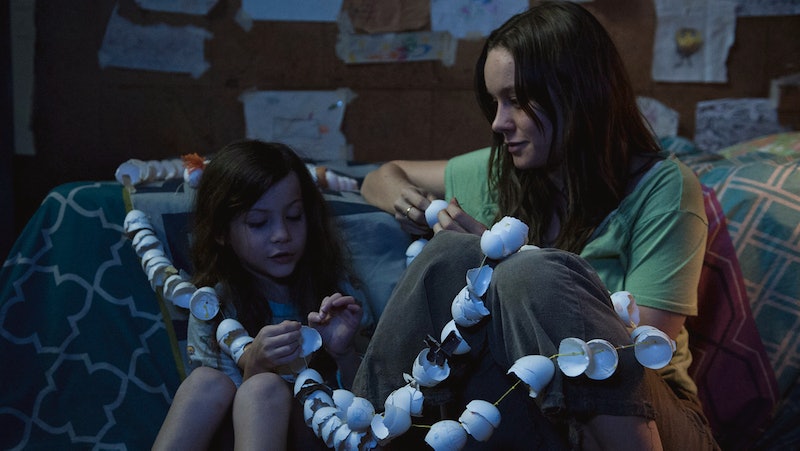 In the new film Room, Brie Larson stars as Ma, a woman who was kidnapped by a vicious stranger when she was a teenager. This tragic event takes place seven years prior to the events of the film, and in the interim, Ma has given birth to a son, Jack, who is now five years old. The two of them share a 10' x 10' room, which is the only life Jack has ever known. Ma then formulates a plan to escape the room, taking the opportunity to show Jack the world outside the room — a world he knows nothing of. It's a gut-wrenching story, and one that feels all too real given the rash of similar events that have taken place in real life in recent years, such as the disgusting tale of Ariel Castro, who held three young women captive for a decade and fathered a child with one of them. Knowing that there are incidents like this occurring in the real world, lots of people are wondering if Room is based on a true story, and if its events actually happened. Thankfully, Room is a work of fiction.

The film is based upon the best-selling novel by Emma Donoghue, and hews pretty closely to its source material since the screenplay was also written by Donoghue. Although the writer created the characters and events seen in Room, there is a reason why they seem so true to life. Donoghue was actually inspired to write her novel by a real-life kidnapping that took place in Austria in 2008, she told The Guardian, and it's even more disturbing than what happens in Room .

In the case of Elisabeth Fritzl, the girl was held captive by her own father for 24 years. In 1984, when she was 18, Elisabeth was asked by her father, Josef Fritzl, to help him carry a door down to their basement. That door was the final piece of a secret prison Josef had been building for Elisabeth since she was 12, and after she helped him install it, he rendered her unconscious and threw her into the prison. Josef told Elisabeth's mother and police that the girl had run away to join a cult, and he would periodically force her to write letters saying as much, which he would have postmarked from far away locations for legitimacy.

Over the years, Josef raped Elisabeth regularly, and fathered seven children with her. One child died shortly after being born, three lived in the dungeon with Elisabeth, and three were taken by Josef to live with his family in his house. He had explained to his wife and social workers that they were Elisabeth's children, and he was able to legally foster them without arousing suspicion. Elisabeth's mother did not know her daughter was being kept prisoner, as she was never allowed in the basement and the prison was hidden behind several doors with electric locks.

Elisabeth finally made it out of her horrible imprisonment in 2008, when her daughter Kerstin, a member of the dungeon, fell unconscious due to kidney failure. She was brought to the hospital by Josef, and the hospital staff were very suspicious of her situation and Josef's story of how the girl came into his possession. Later, Elisabeth convinced Josef to allow her to see her daughter in the hospital as well, and police were notified by hospital staff when Elisabeth arrived. It was then that she was finally freed by police along with her children, and Josef was arrested on a number of charges and sentenced to life behind bars.

The part of this unbelievable story that stuck with Donoghue and inspired her to write Room was the effect it must have had on Felix, Elisabeth's son who was just five when he was released into the world. She became fascinated by the idea of telling the story from his perspective, and trying to imagine what it would be like to leave the only life you've ever known, without even knowing how tragic it is, and be thrown into the world at large.

While Room is not a true story, its clear that it has a real world inspiration. Sadly, stories like the one depicted in Room do happen in real life. But here's hoping that someday, events like the Fritzl case will be relegated strictly to the world of fiction.

More like this
The 'Spiderhead' Movie Ending Is Nothing Like The Short Story It’s Based On
By Morgan Leigh Davies
You Might Want To Rewatch 'Elvis' For This Britney Spears Easter Egg
By Grace Wehniainen
What Colonel Tom Parker Was Really Like
By Morgan Leigh Davies
What Does The Presley Family Think Of 'Elvis'?
By Arya Roshanian
Get Even More From Bustle — Sign Up For The Newsletter