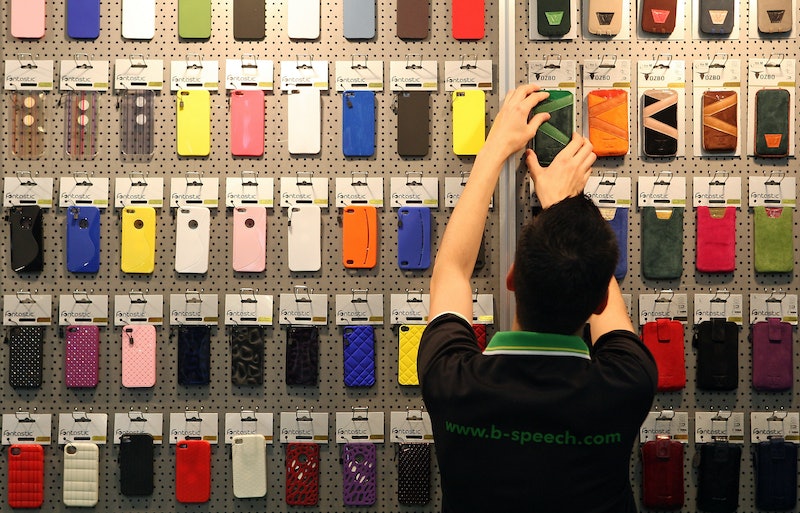 Apple sold a record-breaking 13 million iPhone 6S and 6S Plus phones in a single weekend when they became available in a dozen countries, including the U.S. and China, on Sept. 25. The newest smartphones will be available in 40 more countries on Friday — including Greece, Belgium, and Mexico — and many Middle Eastern countries on Saturday. It's always really exciting to get the newest, most high-tech smartphone; spending time learning its new features, customizing it to your preferences, and showing it off to your friends. And it's tragic when your new iPhone breaks not long after you leave the Apple store. But don't worry, there are lots of super durable iPhone 6S and 6S Plus cases that will keep your phone safe even in extreme circumstances.

As anyone who's ever smashed an iPhone knows, having a case on it is essential. Apple's newest design includes 7000 series aluminum, making the 6S and 6S Plus the strongest iPhones yet, but they still aren't indestructible, unfortunately. So you need to protect your phone with a sturdy case designed to withstand extreme drops, bumps, and tosses. Because let's face it, we put our phones through a lot.

Here are 12 super durable iPhone 6S and 6S Plus cases that you'll have to try pretty hard to break:

Otter Box is known for its extremely sturdy designs, and this Defender Series case has drop protection (which helps is deflect and absorb impact when it's dropped), dust protection, screen protection, and scratch protection.

Also from Otter Box, this MySymmetry Series case will protect your phone from drops, bumps, and scratches, and it's easy to remove when your phone needs a breather.

Trident's Aegis Pro case is equipped with 360 degree shock absorption and two layers of protection that will protect an iPhone from 26 drops onto concrete from four feet up, according to Trident's website.

X-Doria's Defense Lux iPhone 6s case is made of machined aluminum and can withstand drops on concrete from six-and-a-half feet, according to X-Doria's Amazon page.

Griffin Technology's Survivor Summit case is shatter-resistant, so it can survive almost anything. It will also protect your phone's controls, headphone jack, speakers, and microphone from debris.

The Survivor Custom case, also from Griffin Technology, offers the same protection as the Survivor Summit, but lets you customize the colors of each section.

The iGlaze Armour case from Moshi has an aluminum backplate and a shock-absorbing inner shell to keep your iPhone in one piece, while still looking sleek.

Case-Mate's Naked Tough case has a resistant hard shell, as well as corner bumpers, but isn't big and boxy.

The Radius Aluminum case from AHA Life has Aerospace-grade liner on the corners for increased shock absorption and very strong aluminum and stainless steel screws.

On top of a durable aluminum frame, the Cloak case by Ghostek has a glass armor screen to keep your iPhone's screen intact.