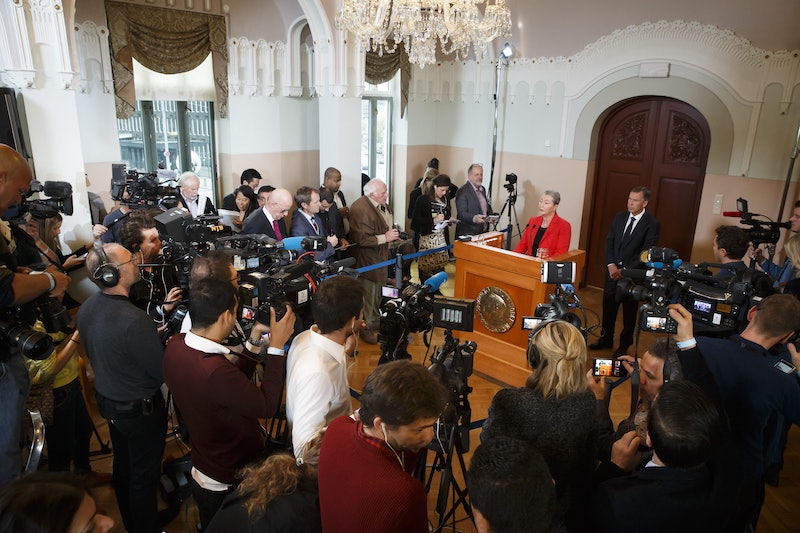 A week of surprise phone calls and worldwide celebrations of man's achievements ended Friday when the Tunisian National Dialogue Quartet won the Nobel Peace Prize for helping to establish peace in the country after the Arab Spring. The quartet is made up of four key organizations: the Tunisian General Labour Union; the Tunisian Confederation of Industry, Trade, and Handicrafts; the Tunisian Human Rights League; and the Tunisian Order of Lawyers. The Norwegian Nobel Committee said in a statement that Tunisia's people should see the prize as encouragement as it continues to forge ahead toward peaceful prosperity.

The Nobel Prize committee said the honor was awarded to the quartet as a group, rather than to the individual organizations, since it was only when they were together that they became "instrumental in enabling Tunisia, in the space of a few years, to establish a constitutional system of government guaranteeing fundamental rights for the entire population, irrespective of gender, political conviction, or religious belief."

The Arab Spring, which began at the end of 2010, originated in Tunisia as widespread demonstrations and protests forced President Zine El Abidine Ben Ali to flee the country. The revolutionary wave spread to nearby countries, including Egypt, Libya, and Yemen, where longstanding rulers and dictators were ousted. Major protests were also sparked in Algeria, Iraq, Jordan, Kuwait, Morocco, and Sudan.

On Oct. 23, 2011, Tunisia held its first true elections since gaining independence from France in 1956. But civil unrest and a number of political assassinations threatened to reverse Tunisia's progress and throw the country back into chaos. With the democratic process in danger of collapsing, the coalition of four formed in 2013 and laid the groundwork to lift Tunisia and make it an Arab Spring success story.

But Tunisia stands alone in the spotlight as its neighbors have yet to truly reap the fruits of democratization. Despite the 2011 deposition of President Hosni Mubarak, Egypt continues to be led by the military elite. In war-torn Syria, Bashar al-Assad runs unopposed in "free" elections. When asked what message the award should send to other Arab countries where democracy less certain, Chairperson Kaci Kullmann Five told reporters:

We hope [the Peace Prize] will inspire people to see that it is possible to work together, that Islamists and secular political movements have managed to do so with the help of the civil society in Tunisia and that this is in the best interest of everybody in the country.

More like this
What To Know About Martin Bashir After Watching 'The Crown'
By Bustle UK
Read Dan Levy's Heartbreaking Message After The Club Q Shooting
By Stephanie Topacio Long
Iran Has Issued A Death Sentence Over Mahsa Amini Protests
By Catharina Cheung, Darshita Goyal and Maxine Harrison
Kate Middleton & Prince William Were Booed & Mocked On Their U.S. Visit
By Jake Viswanath
Get Even More From Bustle — Sign Up For The Newsletter