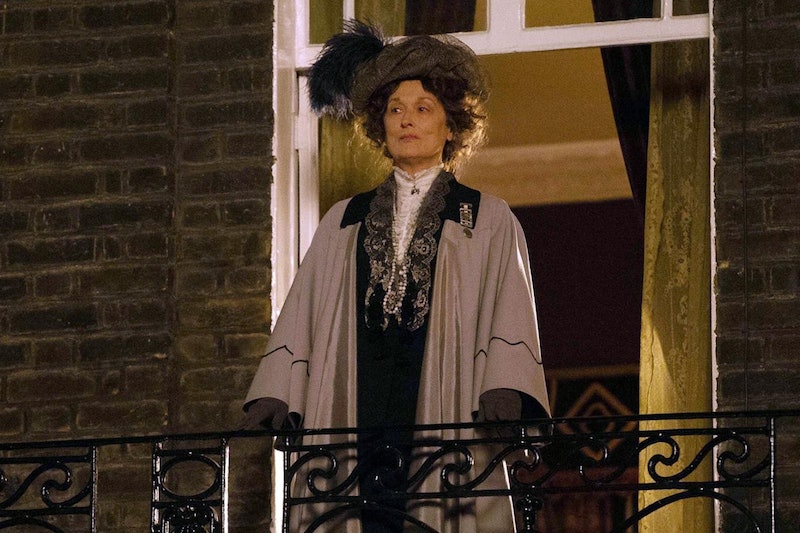 Speaking at the Women in the World Summit in London Thursday night about her new film Suffragette, Meryl Streep was mostly quiet. The panel, which was also supposed to include Carey Mulligan, but didn't (probably because she pretty much just had a baby), put the film's director and producer on the stage along with Streep. Though Streep was mostly quiet throughout the panel (she's had a tough week, what with that "I'd Rather Be A Rebel Than A Slave" tee-shirt controversy) she did speak up vehemently in one moment: when Suffragette's producer, Alison Owen, wondered aloud how the British suffragettes the film depicts would have felt about the progress the women's movement has made. "I think they'd be disappointed," Owen said.

"No, I disagree," Streep piped up vehemently. She then went on an awesome feminist rant:

"[Back then, a woman] lost her name, and her home. Any children that were hers belonged to him — from her shoes to her combs. Any money that she brought to the marriage — were his. Any children that she had — were also his. So, she could leave him, and run away, but she had no choice. If she decided the 12-year-old [her child] needed to be educated, she had no choice, because it was he who paid. If he married [someone else], went off in a [more] profitable marriage, she had nothing to say about it."

"This kind of describes many places in the world right now," Streep continued. "We have a sex trafficking business that is 90 billion dollars, second only to arms dealing. And it deals mostly in little girls and women. But: half of the people in law school in America are women. More than half of the people in medical school are women. We're making incursions in business, we're coming up from the bottom. It's just that upper echelon we haven't broken through. And women's issues are men's problems. Don't give up the fight. It's not over."

You can watch the video below, since of course, her delivery is on fleek.

Of course, because this is Meryl Streep we're talking about, the audience hung on every word and broke into rapturous applause — especially after that last line. It's no wonder she was cast as the women's rights activist and brilliant speaker Emmeline Pankhurst. The film, which is out Oct. 23, is already getting stellar reviews, and is likely to be a must-see for every feminist. Too bad for the male actors who turned down roles; many of whom refused to be cast, the film's director Sarah Gavron said, because "the parts were too small."