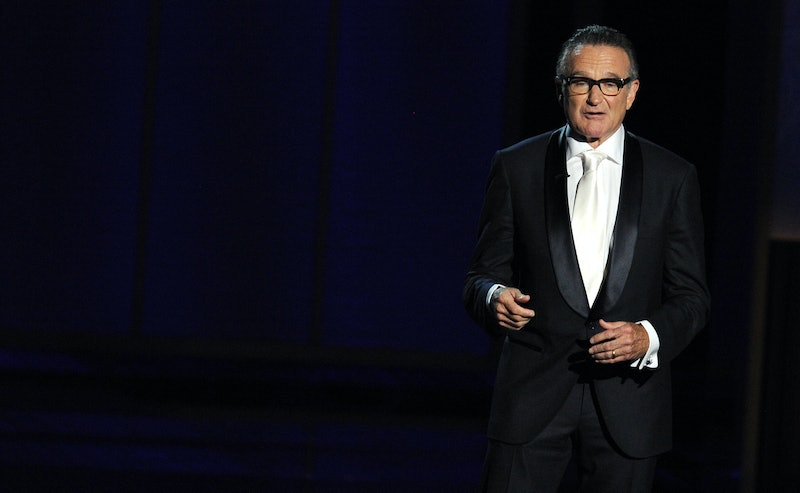 The Disney Vault has been smashed open, and, from it, one of your favorite films has emerged. After nearly 25 years, an Aladdin Diamond Edition Blu-ray Combo Pack is out (woo, that was a mouthful), and it includes another piece of hidden treasure. Included in the DVD extras are never-before-seen Robin William outtakes of his vocal work for Genie, and, in a Aladdin voice actors reunion on Good Morning America, the directors, composers, and cast recounted the wonder of Williams.

It's OK to get a little emotional here, I don't judge. Sometimes I still reel from the shock of Williams' death last year, having met him during a showing of Bengal Tiger at the Baghdad Zoo a few years back. He was just as vibrant in real life as he is as Patch Adams, as Dr. Sean Maguire, as Mrs. Doubtfire. But if the often-retweeted, if not controversial, "Genie, you're free" memorial says anything, it's that Williams will be beloved for many, many characters... but, to an entire generation of children, he'll especially be credited to breathing magic into Genie.

But let's not mourn a death and instead, celebrate a life. This segment is definitive proof of Williams' unmatchable zeal and off-the-wall talents, and teach us things we never knew about the making of Aladdin. Scroll down for the full video, and take a magic carpet ride with me as I show you a whole new world of things learned from these resurfaced clips.

1. Williams Was Sporting Quite A Hair Cut During Those Early Recordings

This must have been circa 1991/1992, so he has a sort of an Uncle Jesse from Full House look going on. Not quite a mullet, but definitely at least an intriguing shag cut.

2. There Were Plenty Of Genie Skits Cut Out

You may remember that Genie had a whole slew of gimmicks that he would play out for his own amusement (being trapped in a magic lamp will do that to a person). Well, turns out Genie had a whole bunch of other schticks that didn't make the cut, such as an interview between a reporter and a boxer (Spoiler: Genie plays both).

3. Likewise, There Were Even More Characters Imitations Not Utilized

Genie is great at nailing pop culture impressions that are easily 2000 years ahead of their time, and yup, there's plenty more where that came from. Do I spy Obi Wan Kenobi in the background?

4. Williams Brought His Impressive Physicality To His Recording Sessions

We remember him as an actor who used his whole body to tell a joke, and that's true even when he's simply lending his voice. Though his recordings, Williams is quick to mime out what's happening in the film, and never shies from manipulating his appearance to get further into character.

5. The Character Of The Genie Was Written With Williams In Mind

OK, I actually didn't know this, but maybe you already did: in 1991 Disney animator Eric Goldberg was told to listen to Williams' stand-up and draw him as a Genie. From the beginning, the part was written for him, which makes for another reason why the Williams and Genie are so closely tied together.

If nothing else, he was never short of energy.

7. And After These Recording Sessions He'd Be Drenched In Sweat

Always putting his entire soul into a performance.

Well, I look forward to catching the rest of the outtakes, but, until then, take a sneak peak below.