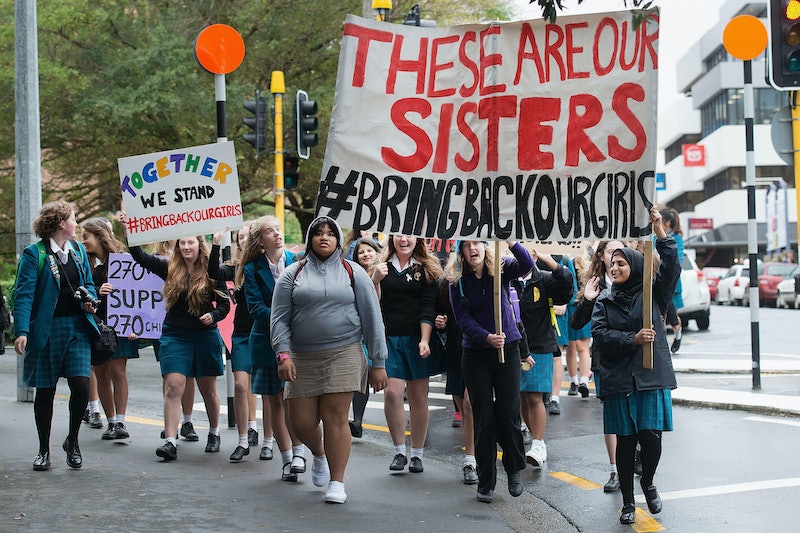 For millions of young girls across the globe, issues that would elsewhere be readily resolved end up becoming undue burdens instead, forcing them to live their lives around their problems rather than focusing on schooling building healthy emotional bonds with the rest of their respective communities. Subjects such as puberty and menstruation are ignored either out of lack of educational materials or because they've become taboo topics which no one is willing to discuss. Of all the issues affecting young girls worldwide, a vast number of them can be easily remedied, so long as they're given the necessary attention and assistance — and on October 11, the United Nations will observe its official International Day of the Girl Child to encourage the global community to provide both.

"If effectively supported during the adolescent years, girls have the potential to change the world — both as the empowered girls of today and as tomorrow’s workers, mothers, entrepreneurs, mentors, household heads, and political leaders," wrote the U.N. in a statement on its official site. "...However, there has been insufficient investment [so far] in addressing the challenges girls face when they enter the second decade of their lives."

The Facts: According to a U.N. spokesman, some 37,000 young girls around the world are either sold or married off to older men each day — that averages out to around 146 million in a single decade. "In the developing world, one in three girls get married under [the age of] 18," U.N. Population Fund Communications Specialist Eddie Wright explained to Bustle in an email. "One in nine is married under 15."

A study published in the European Journal of Research and Reflection in Educational Sciences this year also indicated that early marriage resulted in a severe lack of education opportunities for young girls, given that many of them become pregnant soon after. "In rural areas girls' dropout rate became higher because parents consider girls' schooling as of no benefit when they leave their own family after getting married," wrote the study's co-authors, S.M. Shahidul and Zehadul Karim.

What You Can Do To Help: In order to combat the practice of child marriage, groups like Kenya's Samburu Girl's Foundation are doing everything in their power to help rescue girls from dismal prospects. "In our two years of operation, we have been able to rescue over 200 girls and we are sponsoring 135 girls to schools around the country," the group wrote on its website. By placing young girls in rescue centers and giving them extensive education and rehabilitation, the Samburu Girl's Foundation is taking proactive steps to stop the cycle. Donate directly online and sponsor one of their students, then talk about it on social media with the hashtag #OurGirlsMatter.

The Facts: Like child marriage, teen pregnancy is one of the leading causes of school dropout and missed growth opportunities for young girls around the world. "In developing countries, nine out of 10 births to adolescent girls occur within marriage," said Wright. "Every day in [those same] countries, 20,000 girls under 18 give birth (7.3 million per year), and complications from pregnancy and childbirth are a leading cause of death."

Shahidul and Karim seemed to agree with those statistics, explaining in their recent study, "Though some countries permit girls after getting pregnant to return to school, research found that the re-entry rate is not much higher." A World Health Organization study also showed that delaying pregnancy and offering more comprehensive sex education courses led to broader economic and social benefits for all, as well as an increased education success rates for adolescent girls.

What You Can Do To Help: Until the issue of child marriage and more adequate pregnancy prevention curriculum are instituted, there's not much you can do except voice your concerns — although that alone is a powerful thing. Introduce the topic whenever possible and, if you can, donate to organizations like UNICEF, which work to help provide resources and lobby on behalf of young girls everywhere.

The Facts: In December last year, U.N. Secretary General Ban Ki Moon released a report in which he stated that "women, youth and children [should] have access to the full range of health services", including abortion services and reproductive education. Although Ban's report left something to be desired in terms of just how the organization planned to go about enacting that revolutionary change, he raised an important point.

According to the group Advocates for Youth, some 16 million young girls between the ages of 15 and 19 give birth each year. "For these young women, complications from pregnancy and childbirth are the leading cause of death, and unsafe abortion is a major contributor to this mortality," the group explained in a report. "Unsafe abortion can also result in lasting and devastating consequences, including, sepsis, perforation of the uterus or intestines, hemorrhage, chronic pelvic infection, and infertility."

What You Can Do To Help: Founded in 1973, global nonprofit Ipas works to prevent death and disability resulting from unsafe abortions for mothers of all ages across the world. By providing education and resources to young girls and women, Ipas offers a safe route to reproductive health services where there might otherwise be a gap in understanding of personal freedoms. Donate or get involved by visiting their website directly.

The Facts: A harrowing 2013 report by UNICEF revealed that 130 million girls and women across 29 countries had experienced some form of female genital mutilation in their lifetimes. Aside from being considered inhumane, the practice can also lead to serious health issues, including infection, infertility, and death.

"The practice is perpetrated by families without a primary intention of violence, but is de facto violent in nature," wrote the group in a report. "[It's] such a powerful social norm that families have their daughters cut even when they are aware of the harm it can cause, [and] if families were to stop practicing on their own, they would risk the marriage prospects of their daughter as well as the family's status."

In addition to voluntary mutilation, as militant and extremist violence builds, young girls across the globe are regularly subjected to sexual assault and rape as a weapon of war. A report out of Nigeria in May, for example, suggested that hundreds of girls taken captive by the terrorist group Boko Haram had been raped and tortured in order to impregnate them with the next wave of militants.

What You Can Do To Help: Currently, there are several organizations working to end the practice of female genital mutilation and sexual violence against girls. The nonprofit Desert Flower Foundation offers female victims reconstructive surgery at its various health centers and provides gynecological and psychological care; Similarly, you can make your voice heard by partnering with the nonprofit advocacy group V Day, which works to help end violence against women and girls worldwide, to organize an educational One Billion Rising movement in your community (find out how on the group's official site).

The Facts: Whether they lack adequate feminine hygiene products or have been forced out of school due to rampant social stigma surrounding menstruation, getting a period for girls around the world can mean missing out on valuable educational opportunities. A study by the United Nations Children's Fund last year showed that in Africa alone, one in 10 girls skipped school due to embarrassment over their menstrual cycle. In Tanzania, a study published in the Journal of Adolescence estimated that the number of school days missed amounted to around 4 days per month — forcing girls to fall behind in their studies.

Not having access to tampons, pads, or menstrual cups isn't just frustrating for girls and women either — it can be downright dangerous. According to the organization Menstrual Hygiene Day, somewhere around 50 percent of girls in Iran, 10 percent in India, and 7 percent in Afghanistan believe that menstruation is "a disease"; In parts of urban India too, the group stated on its site, "48 to 88 percent of girls use reusable cloth, yet they are often washed without soap or clean water", resulting in disease and infection.

What You Can Do To Help: Groups like the nonprofit Day for Girls provide pads, tampons, and clean reusable cloths to girls across several countries, as well as offering reproductive health information and education to help end the stigma surrounding periods. You can also sign up to donate feminine hygiene products every time you order your own through LunaPads' One4Her program.

More like this
The Families Of Grenfell Tower Are Still Waiting For Justice, Five Years On
By Bustle UK
Plan C Vs. Plan B: What's The Difference?
By Lexi Inks
34 Quotes That'll Inspire You On Juneteenth & Beyond
By Syeda Khaula Saad and Siena Gagliano
How To Fight For Reproductive Rights, Based On How Much Time You Have
By Courtney Young
Get Even More From Bustle — Sign Up For The Newsletter