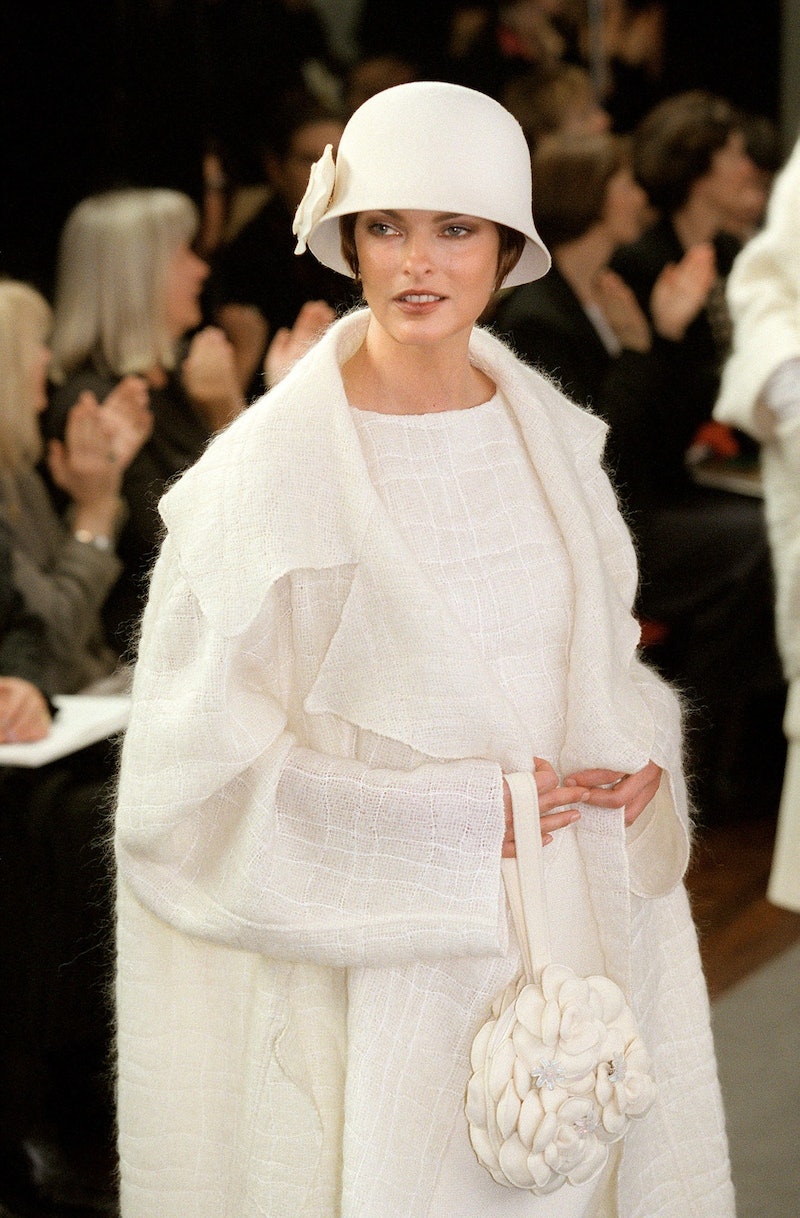 Like rock stars of the high fashion runway, the supermodels of the '90s were the epitome of beauty and glamour. Admired all over the world for their style, and in some ways their sisterhood, fashion icons like Cindy Crawford, Linda Evangelista, Naomi Campbell, and Christy Turlington helped pave the way for today's generation of models to be more business-savvy, empowered, and outspoken. One of the most famous quotes from a '90s supermodel, perhaps from any model in history, actually came from Evangelista.

"We have this saying, Christy and I.... we don't wake up for less than $10,000 a day," Evangelista told Vogue back in October 1990. She was referring to her and fellow supermodel Turlington's reported asking price for being in-demand faces of the fashion industry. While it may have sounded like she was having a diva moment at the time, Evangelista was simply giving her hard work some worth, and rightfully so. After years of unfairly viewed as human mannequins, their stardom allowed these supermodels to speak out on various topics and give a voice to their profession.

Throughout the years, the '90s supermodels have been featured by various media publications not just for their contributions to the fashion industry, but also for their continued success as artists, entrepreneurs, mothers, and so much more.

Evangelista was not the only supermodel to utter such a memorable quote. Here are other '90s beauties with their words of wisdom:

"I always say even I don’t wake up looking like Cindy Crawford."

In 2009, Crawford told Redbook about the difference between her supermodel life and real life.

Of the dozens of candid quotes that Campbell has reportedly said over the years, this pitch-perfect affirmation of confidence and self-love is the reason why she's the most badass model of all.

"I've never been afraid of a twinset."

This quote definitely needs an explanation. After fellow model Kate Moss made a comment about seeing her wear a matching (and considerably less-fashionable) ensemble, Turlington admitted to wearing a twinset (a cardigan and matching shirt) while a trip to South Africa. "Excuse me, what are you gonna wear, Versace?" she told Harpers Bazaar . Mic drop.

"I always thought that [fashion and modeling] wasn't who I was; it was what I did."

The most low profile member of all the '90s supermodels, German-born Patitz said in a 2009 interview that she didn't want her career to define her. Respect.

"Nothing tastes as good as skinny feels."

Famous for making the waif-look high fashion, Moss' controversial quote might have been said as a joke, but it's negative implications did little to help the pressures faced by young models. While there's still a ways to go for the fashion industry to fully recognize and correct such issues, it's refreshing to know that the new generation of body-positive models like Gigi Hadid are changing that landscape.

"It was only once I was in front of the camera that I would cross the line and become sexy."

Even though her sexy Guess ads helped launch her career, Schiffer admitted that she was very shy IRL.

"Getting involved with Axl Rose? Clearly a mistake."

Seymour dated the Guns N' Roses singer in the early '90s and played his bride-to-be in the epic "November Rain" music video. The model regretted this time in her life, but told Harper's Bazaar that the experience taught her a lot.

"I make a lot of money and I'm worth every cent."