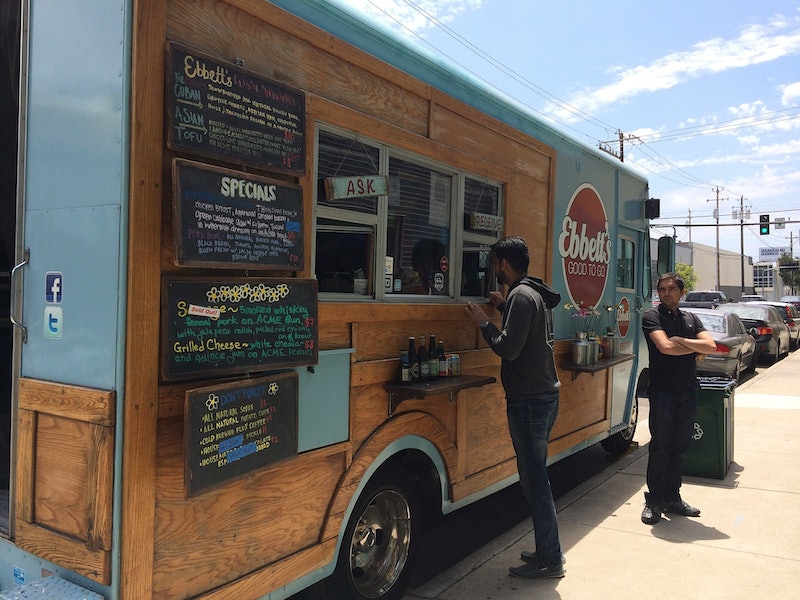 I hope you guys are hungry — October 11 is National Food Truck Day! Food trucks have become a staple part of the culinary scene in most cities, dishing out meals that rival even the most highly rated restaurants. Though street food itself is nothing new (it’s been done in tourist destinations around the world for decades), the food truck industry has experienced rapid growth over the last five years. The first food truck was an ice cream truck turned taco dispensary that was opened by Raul Martinez in 1974 in East Los Angeles. Ever since, the growth in the popularity of mobile cuisine has been on the rise. Almost as quickly as we watched hundreds of cupcake shops pop up all around the country, food trucks sprouted up in every city.

Once reserved for summer festivals, you can now find food trucks parked in abandoned lots, lining the streets of the beach, and hunkering down at practically every farmer's market. These mobile nom machines serve up everything from lobster rolls, to cupcakes, to the best darn tacos you’ve ever had. There is literally a food truck for everyone, including those among us who have dietary restrictions. Gluten-free? Vegan? Kosher? Don’t worry, there’s a food truck for that.

In honor of National Food Truck Day, here is a list of 10 of the most popular food trucks from around the United States.

Kogi BBQ is an L.A. landmark that dishes out delicious Korean BBQ to the fine people of Los Angeles. Kogi offers up kimchi quesadillas, along with other street food fit for a king (but easily afforded by the masses).

Portland foodies can find Asian eats that delight their taste buds at Phat Cart. The popular food truck can be found at two locations in Portland, and has a mission of creating truly authentic cuisine based on the owner's travels throughout Southeast Asia. Phat Cart specializes in bento boxes that boast non-GMO and hormone-free ingredients.

Chicago is no stranger to the culinary indulgence of food trucks. One of its most popular mobile destinations is Cupcakes for Courage, a food truck that supports cancer research. Don’t let the name fool you, though. Cupcakes are served, but so is a scrumptious array of breakfast foods. The sisters who own this conscious cupcakery even appeared on Cupcake Wars!

Fusing together Southern cooking and Asian-Mexican flavors, Yumbii has created an entire experience with its gourmet food on wheels. Voted best of Atlanta in Creative Loafing magazine, Yumbii says, “The truck is high energy, inviting, and digital to the core.” I can personally attest to the fact that its fish tacos are mouth-wateringly divine.

Check Wafels and Dinges off your foodie bucket list when you’re in the Big Apple, because New York natives and tourists alike rave about this Belgian-inspired mobile eatery.

There are lots of famous food trucks in Miami, but a local favorite is Ms. Cheezious. This truck plates up comfort foods with a twist. One of its most popular items is a Crabby Cheese Melt — grilled cheese, not quite like your mom used to make.

Space City is home to hundreds of food trucks, but one of the most popular has a simple, yet delicious concept — waffle sandwiches. The Waffle Bus serves sweet and savory waffle sandwiches with flavors like Nutella and banana, smoked salmon, and, of course, the Southern favorite: chicken and waffles.

D.C. Empanadas is a food truck that serves up a smorgasbord of empanada options, ranging from the Executive Order (bacon cheeseburger empanada with grilled Vidalia onions) to the vegetarian-friendly Menage a Trois (brie, figs, and marcona almonds). Rumored to be President Obama’s favorite, this food truck is worth checking out!

Don’t be fooled into thinking that this rainy city lets the weather stop the food truck movement from being a big hit. Home to some of the most innovative mobile food shops around, one of Seattle’s most popular is Marination Mobile. Serving the streets of Seattle with tacos, sliders, quesadillas, and more, Marination Mobile combines Hawaiian and Korean cuisine for some drool-worthy eats.

This food truckin' machine of a city is no stranger to food on the go. Though Philadelphia has long been known for its one of a kind cheesesteaks, Prime Stache food truck is proof that there’s always room for new flavors in this food-loving city. Spooning out servings of edamame ravioli and grilled octopus, it's grown itself quite the following in Philly.

Looking for amazing food ideas? Check out Bustle on YouTube.