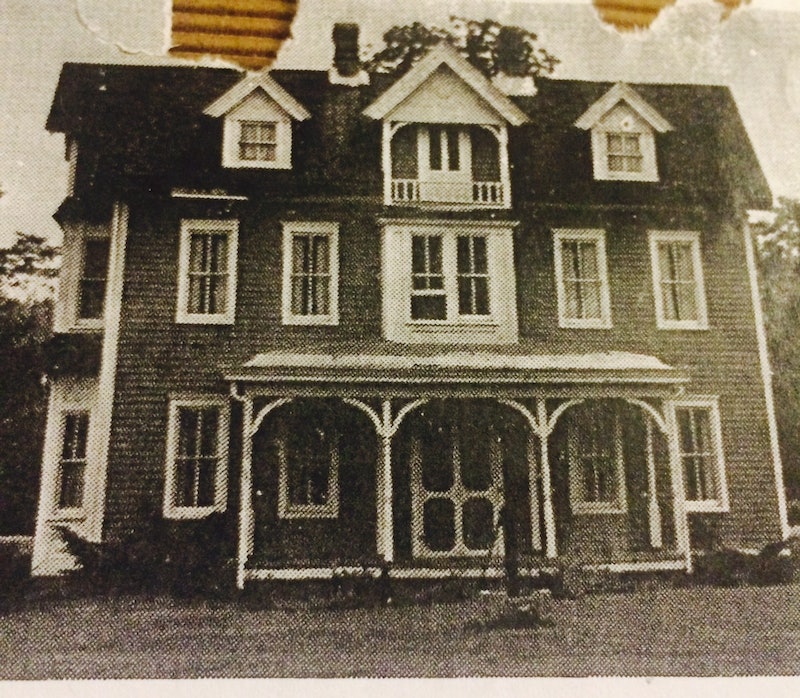 Everyone loves a good ghost story. As a child, it was hard to escape a campfire or sleepover without someone chiming in with their very own tale from the crypt — except let's be honest: The tales were usually pretty lame. It was always about some kid's grandpa's friend from the war who knew a guy who knew a guy, making it too far removed to invoke any real sense of terror, if you ask me. But mine? Mine were different. You see, no one could ever throw shade at my ghost stories — because I was the kid who actually grew up in a haunted house. I was a real-life Wednesday Addams, and this is what it was like.

In 1989, my mother moved three kids, two cats, two birds, one dog, and her newly-minted husband from a somewhat normal suburban life in northern New Jersey to a deteriorating 22-room Victorian mansion in southern Delaware. Locally famous for its age and size, the Harrington townies affectionately knew it as "The Fleming Mansion." My mother, the ever-eccentric artist, had high hopes of gutting the beast and turning it into a fully functioning Victorian B&B. Although the house had been vacant for quite some time, its Old World charm seemed to eclipse the rotting shag carpet and cobwebs clinging to its corners. Vaulted ceilings, marble fireplaces, ornate wooden fixtures — the place had it all. As a five-year-old, I immediately fell in love with the transom windows, which allowed for just enough light to shine through above its mahogany bedroom doors. And that third floor widow's walk? Sheer enchantment. "This must be the place," I thought upon setting foot in the house. "This must be home."

Not too long after we moved in, my mother sat us three kids down and explained why our sizable new home was so famous. Sure, it was very large and very old, but apparently, it was also very haunted by its original owner and architect, Ezekiel Fleming. Fleming made a name for himself as a successful lumber dealer and steam grist mill owner, and by 1870, he was considered one of the most prominent self-made merchants of Delaware. Consequently, his custom-built home lived on as a towering relic of Delaware's golden years.

Although ownership changed hands frequently throughout the 1900s, Fleming's spirit remained. My mother bought the house from "Esther G.," an eccentric socialite who was well known for throwing lavish dinner parties throughout the 1970s and '80s. As one of the legends goes, one day while Esther G. was cleaning the back family room, she heard footsteps coming down the back stairs. She looked up and found herself face to face with Fleming's apparition, who spoke these six words to her: "Don't look at me. I'm ugly." Esther G. sprinted out of the house, got in her car and drove 60 miles before she realized she wasn't wearing any shoes. She refused ever to set foot in the Fleming Mansion again — not for the packing, not for the moving, and certainly not for the closing. To this day, I have no idea how the physical sale of our house went down. And yet there we were, in 1989, unpacking our lives — settling in for the long haul.

It was even rumored that the house had been a stop on the Underground Railroad — and with no shortage of secret passages, who were we to argue otherwise? The proof was in the pudding: A phony dumbwaiter ran between the first and third floors via rope and pulley and a boarded up cement tunnel led from an old coat room to a vacant basement that could only be accessed from an outside door. As a kid, I wanted nothing more than to tear off that mildewy old board and launch myself head first down that cement tunnel.

With so many bewitching nooks and crannies in a house that size, my imagination was often encouraged to run wild; the house's quirks also resulted in some truly epic games of hide and seek. But all too often, the fun was overshadowed by something else: A presence — an authoritative presence — unseen to the naked eye, yet felt with every fiber of the body.

Lights flickered. Doors slammed. Mirrors shattered. Electricity surged. Cable boxes bugged out. And faucets? Well they seemed to have a mind of their own. Was that the cat walking across the piano keys? Or the spirit of Fleming, making himself "known" again? So many nights I'd lay in bed, trying my best not to hear the men's voices echoing throughout the third floor. I'd pull the covers taut. I'd hum. I'd sing. Sometimes, during rare bouts of fearlessness, I'd listen closely, trying to make out what they were saying. But no matter how hard I tried, I could never decipher the faint muffle. After countless sleepless nights, I seriously began to question my new "home." I certainly wasn't feeling welcomed anymore.

True to her word, my mother gutted each room, one by one. The front living room became the formal parlor. A nondescript foreroom was transformed into a music room, where, on a daily basis, I'd play my heart out on my bongo drums to the tune of the Talking Heads. Speaking in Tongues was my album of choice, and given those nightly third floor voices, it's only now that I see the irony in it.

A story: One summer night, my middle brother and I were home alone. A thunderstorm was rolling in, which was pretty typical of late August. Although we were only eight and eleven years old at the time, we knew well enough to shut all storm windows the moment we caught wind of anything that could shatter the mansion's original, 150-year-old panes of glass. We'd done our job. The house was closed up tight. We were sitting in the back family room, at the foot of the back staircase — the same back staircase of Esther G. fame — watching MacGyver. My brother always made me watch MacGyver because he knew that I was too scared to go anywhere else in the house and watch TV alone. Heck, the thought of doing anything alone in that house was terrifying. Showering? Always quick. Pooping? Rapid fire. Getting up to pee in the middle of the night? No, ma'am, you held that bladder for hours. And that back staircase was nothing like the grand entryway that commanded the front vestibule. With its molded banister, crimson runner, and wide, gradual steps, the front staircase was elegant and accommodating, as though it was trying to say, "Welcome to our home. May I take your coat?" But that back staircase? It was nothing like the front. It was steep, dark, and windy. Unforgiving at its best, it also led to the old servant's quarters — better known to me as my bedroom.

So there we were, brother and sister sitting on either end of our chocolate brown corduroy couch watching episode god-knows-what of MacGyver, when all of sudden, BAM! My bedroom door slammed shut upstairs with the determination of a last word. Then, one by one, we heard the sound of heavy, steel-toed work boots slowly coming down those back stairs. One... by... one... closer... and closer... to us. Paralyzed with fear from the shoulders down, I craned my neck to look at my brother. He could hear my heart beating from three feet away. "You wanna run to the garage?" were the only words he was able to spit out. Before I could even finish the "huh" of my "uh huh," we were out the side door and halfway to the detached garage. Hours later, we squinted at the misty glow of my mother's headlights pulling into the driveway. Even though she tried to assure me that all was safe and sound, I was reluctant to accept her invitation back into the house. I felt more at ease on the vinyl yellow driver's seat of our John Deere riding lawn mower than I did inside.

That was the thing about my mother. She never tried denying the presence of something otherworldly in the house. She always said she felt safe — protected, as if Ezekiel Fleming was watching over us and his house. But truth be told, I never felt safe. Never once did I feel as though there was an unexplained energy force tasked with looking out for me, let alone protecting me. Instead, I grew accustomed to the fear. Anxiety and uneasiness became my new normal. And it remained that way for a very long time.

We sold the house in 1998. My mother never realized her dream of turning it into a B&B; turns out, old houses of that stature make great money pits. By the time you've fixed one leaky roof, another starts leaking. Oil was expensive, and more often that not, we couldn't afford to heat the main living area during the depths of winter. By '98, my brothers had moved in with our father, and my mother had been divorced from her second husband for years. It was just the two of us left, and the Fleming Mansion was just too large, too old, and too expensive, so we downsized to a six-room bungalow 20 miles north on Moore's Lake.

It's now 2015, and my mother still lives in that lakeside bungalow. I haven't stepped foot in the Fleming Mansion since the day we locked its doors in 1998. It was never my home, and 17 years later, I still don't feel a sense of home — anywhere. I don't think I ever have. And I wonder if I ever will.

More like this
20 Christmas Movie Quotes That'll Get You In The Holiday Spirit
By Alexis Morillo
69 Great Gifts For Guys No Matter What Their Hobbies Are
By Teresa Newsome, Mia Mercado and Brittany Leitner
7 Joyful Alternatives To A Traditional Holiday Celebration
By Jessica Goodman
21 Absolutely Adorable Christmas Gifts For Dogs
By Carolyn Steber
Get Even More From Bustle — Sign Up For The Newsletter