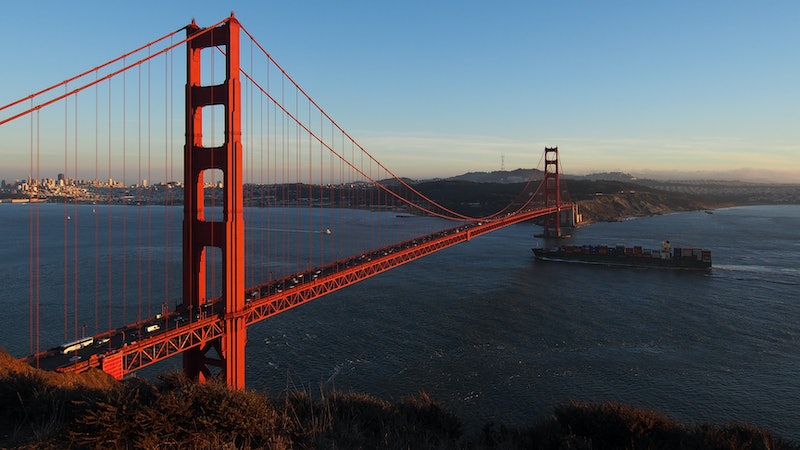 Every city has its little quirks and annoyances that give it unique charm. For San Francisco, one of those "quirks" happens to be human fecal matter all over the place — and this new map of San Francisco's poop problem is disgusting but mesmerizing to behold. Created by intrepid and strong-stomached data explorer William Mees, this comprehensive and updated San Francisco poop map visualizes reports of solid human waste made around town between July 2008 and September 2015.

The poop lying around San Francisco streets has definitely become the stuff of notorious legends. This isn't even the first San Francisco poop map, or the second, sadly enough. The San Francisco poop map appears to be becoming a bit of a genre unto itself, dating back to Jennifer Wong's (Human) Wasteland Map of 2014. And it's all inspired by a very real problem, to be sure. The tech boom has meant more transplants to San Francisco, many of whom were previously less-than-fully acquainted with the city's distinct characteristics, such as the poop. Discussion online has proliferated about "the sh***y city" and why the Superbowl in 2016 will create a local "poop-ocalypse" due to extra visitors and displacement of homeless populations for the festivities. Allegedly, there was even enough poop in some San Francisco subway escalators to break its machinery a few years ago.

I've lived in San Francisco for about six months now, and I can honestly say that the street poop issue was of concern to me even before I got here. But surely, I figured, reports of ubiquitous poop have got to be exaggerated? As it turns out, the situation is kind of better, but also kind of worse than you'd think. I hadn't anticipated that the smell of urine and feces would be so prominent across so much of the city. It doesn't take that much actual poop to really stink a place up I suppose, and urine odors are pungent. Much of the stuff itself is hidden in alleyways (people don't generally enjoy pooping in public), so you don't necessarily have to see it every day, but I've run into a few piles near home in the South of Market district (SOMA) and near work in the Mission, to be sure. Here's the map of how much poop was reported just last month:

What is San Francisco doing about the problem? Though the city was able to finally ban people from the Bay Area Rapid Transit system (BART) for serious infractions like defecating on the train a couple of years back, it's more difficult to quarantine the whole outdoors from sidewalk poopers, and most of those people simply have no place else to be anyways. A recent campaign to install pee-bouncing paint on commonly peed-upon surfaces was sort of funny, but it certainly didn't make anyone's need to urinate go away. A program called the Pit Stop brings attended, mobile bathrooms to the hardest-hit parts of town, which actually solves the issue, but hours and locations are very limited.

Even homeless people themselves are pretty disgusted by the situation, obviously. It's pretty clear from walking around town that some of the publicly pooping offenders are sadly so in the midst of drug use or drug withdrawal that they probably couldn't or wouldn't use a public restroom even if a suitable one were available. Still, adding more public bathrooms that people are actually willing to use, and incentivizing businesses to let non-customers use theirs, would go a long way towards cleaning the streets.

More like this
14 Scary Campfire Stories To Tell Your Friends
By Charlotte Ahlin and Kaitlyn Wylde
26 Ghost Story Podcasts To Get You Ready For Halloween
By Jessica Booth, Mia Mercado, JR Thorpe and Emma Carey
15 Easy Pranks To Play This Halloween
By Emily Kelley and Lauren Grant
You Can Stay At The 'Hocus Pocus' House On Airbnb
By Alexis Morillo
Get Even More From Bustle — Sign Up For The Newsletter