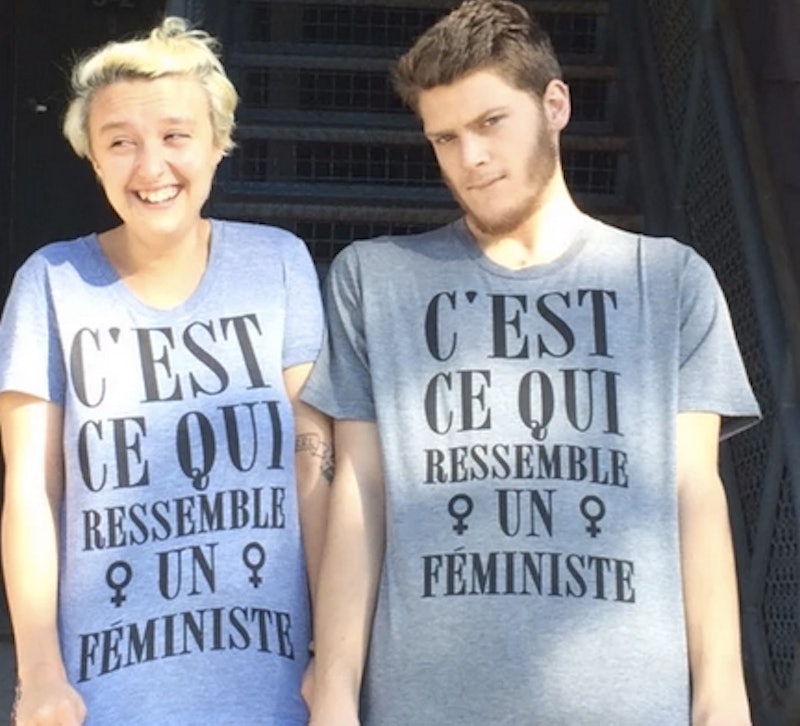 Let's just get one thing clear: I am not a fan of online dating. My personal experience with dating apps like Tinder have been almost exclusively limited to getting cyber dicks thrown in my face and receiving messages ridden with harassment. But, to be perfectly honest, I was once hooked on them.

Before I started dating my current partner, Skylar, I used OkCupid pretty religiously. I was obsessed with the app, and through it spoke to numerous people who I thought I had a real interest in. I went on about four or five dates, and the last one even turned into a quick month-long relationship. I've always known that online dating works for a lot of people, of course, and that it's a great way to meet humans in your area with similar interests. I gave it my best effort, but eventually grew to find using dating apps to be draining and anxiety-inducing nonetheless.

Last week, however, my partner and I decided to embark on an experimental journey through online dating with a feminist twist. We wanted to see how differently straight men would react to female-presenting feminists versus how straight women would react to male-presenting ones. We decided we would each set up a profile broadcasting our beliefs by sporting Look Human feminist tees. Tinder was our app of choice.

As we sat side by side — swiping right on almost every person — the matches came flooding in. We congratulated each other for being so cute. That being said, it was interesting to see that I got way more messages than Skylar. By the end of the night, I had received 10 messages from men who were interested in hooking up with me, curious about my feminism, or both. And by the end of the week, I had accumulated over 100 messages. Here's how it all went down.

Skylar received one single message over the course of a whole week. Jokes about them not being cute enough after all were quickly dismissed, though, and we came to the conclusion that the expectation on these sites is for the guy to start the conversation. This was further supported by the fact that I got a ton of messages from guys without ever initiating any contact. In a way, it was an interesting lesson in the perpetuation of gender roles on dating apps.

The one person who did send Skylar a message was definitely interested in their political beliefs.

Props to this girl, who was one of the only people who tried to really understand the T-shirt (which reads "this is what a feminist looks like") and who got our experiment off to a great start. The tone of the message ("being a guy feminist, do people criticize you?") seemed to imply that she was impressed. This wasn't too surprising, considering certain people are still taken aback when male-presenting humans claim feminism. Skylar, of course, quickly combatted that stereotype. The validity of their feminism and the oppression they face, however, had to remain a secret since — for this experiment — we agreed to pose as cisgender individuals. Surprisingly enough, the girl revealed later that she didn't identify as a feminist anyway.

I, on the other hand, got much less gracefully executed messages. The woman Skylar talked to asked what their definition of feminism was and how it compared to her own. To my despair, most people who talked to me didn't know a whole lot about it. So many of the ensuing conversations included me defining the word "feminism" for my matches (eventually, I just copied and pasted the same response for everyone).

Living in something of a radical feminist bubble, it was no less than shocking to be reminded that there are still people out there who are not aware that equality for women also includes queer/trans individuals, people of color, disabled people, and so on. But since the majority of the people I talked to were cis and white, I feel it speaks to the very reasons why intersectionality needs to be fought for within feminism. Also, this guy's ridiculous response of, "Do I get a cookie," to my informing him that he seems to have feminist values felt condescending. It prompted me to respond with, "Nope, you just get the satisfaction of being a decent human being."

I later spoke to one person who denied the existence of inequality altogether, adding a fun generalization about how all feminists are submissive in the bedroom. My Tinder bio was simply "Angry Feminist Killjoy," so he started the conversation with that.

This made me mad for all sorts of reasons. First of all, today's society is balanced? I suppose it might feel that way to anyone who is cis, white, and male, which he was. But it was his second message made me the angriest, as it implied that all feminists secretly want to be dominated by men even though their politics may imply otherwise. Sighs. My response was pretty sassy, and emphasized that a person's politics have nothing to do with their preferences in the bedroom.

After having seen my clear alliance with feminism based on my attire, one person later expressed his surprise at my existence, since feminists are apparently a myth.

There were some who were more intrigued by my feminism, and seemed to feign interest. Others lied to me about being a feminist themselves, which was revealed soon after as the rest of our conversation left them baffled. One guy went so far as to ask if I'd ever been abused in a relationship. Not only was this invasive, but it was frustrating to think that someone needs to have been mistreated in a very specific way to validate their feminism.

The last sentence in particular felt very condescending. I was beginning to remember why I hated online dating in the first place, at least when it comes to cisgender men.

I also encountered a surprising amount of people fetishizing my politics, clearly turned on by the fact that I was a feminist. My feminist anger, expressed in my profile, was translated to "sexy" and feisty" for reasons I assume have nothing to do with my actual beliefs.

A lot of Facebook photos were attached to my Tinder profile, which I hadn't realized until I received some interesting messages concerning my body hair. A photo of me with my armpit hair exposed opened up a whole other can of worms. One guy informed me that he was super turned on by it, to the point where he wouldn't stop badgering me and even messaged me his number so I could text him more photos of my pits. I've heard of dick pics and tit pics, but I was intrigued by this boy's strange fascination for my underarms.

I also experienced the opposite reaction — a response that I'm more used to thanks to trolls on the Internet. One person sent me hostile messages, harassing me about shaving my armpits and telling me how my personal maintenance choices were "disgusting." He unmatched me before I had the chance to screenshot our conversation.

Throughout this whole experience, I only spoke with three men who identified as feminists. Most notably was someone I like to refer to as Mr. Feminist. He started the conversation with "I'm feminist too," which I assumed was another ploy to get into my pants. So I challenged him by asking what about feminism he is passionate about.

Mr. Feminist responded with multiple links regarding feminist topics he cared about, and I was impressed to say the least.

What Did We Learn?

Overall, advertising our political beliefs via T-shirts was a pretty interesting approach to online dating. It was frustrating to have to explain feminism to a long list of ignorant dudes, as well as having my politics sexualized by many others. However, based on the volume of responses Skylar and I received that were frustrating and the few very nice people we spoke to who had similar values, I saw the importance of including those political beliefs on an online dating profile.

I see now that I possibly could have avoided wasting time on some pretty awful and misogynistic people back in my day had I just been straightforward about my personal philosophies. I feel lucky not to have to worry about all this now, since I'm in a serious and monogamous relationship with Skylar. Still, it was interesting for both of us to see how sporting our feminism on our chests played out on Tinder.

The bottom line is this: If you're a single feminist, consider advertising your beliefs all over your profile, your pictures, and within your messages. I can't count the number of times I abruptly changed the topic of conversation to ask people about their political beliefs throughout the experiment. And why not?

More like this
Playing In Wimbledon Whites While On Your Period “Isn’t Easy," Says Alicia Barnett
By Rachel Mantock
White Eyeliner Dots Are The Cutest Summer Makeup Trend On TikTok
By Olivia Rose Ferreiro
TikTokers With Eczema Are Opening Up About Topical Steroid Withdrawal
By Kui Mwai
The Universal Appeal Of Maison Francis Kurkdjian Baccarat Rouge 540
By Audrey Noble
Get Even More From Bustle — Sign Up For The Newsletter