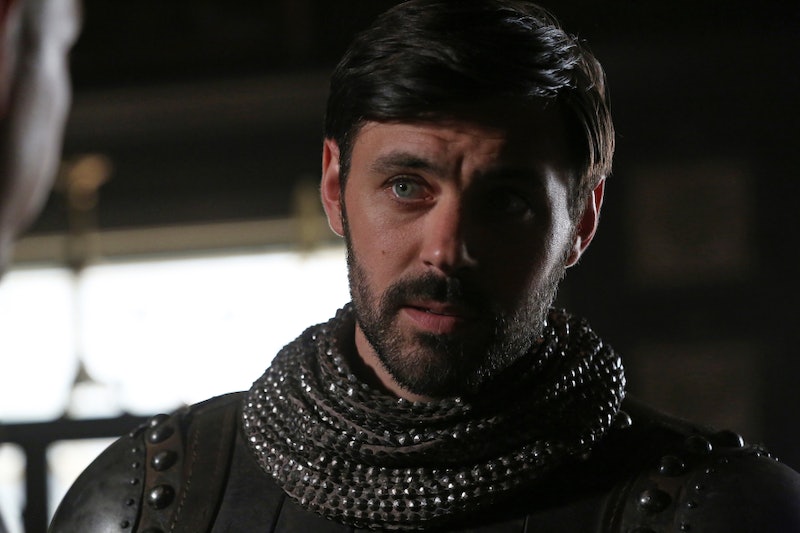 You know, when King Arthur pulled David out of the water on their Toadstool Quest, something felt off about him. I couldn't put my finger on it right away, but I suddenly had this feeling that he was going to turn out to be bad. Guess what? A half hour later I was totally right about this sneaking suspicion. Not only does Lancelot come back to warn Snow about whatever no good deeds are lurking inside Arthur, but then the king kills one of his own men. Hold up, did Once Upon A Time just make Arthur evil?

Up until this point, we had no reason to question Arthur whatsoever. He welcomed the whole Charming family (plus Hook, Regina, Belle... and Granny) into Camelot with welcomed arms. Is he really hospitable, or was this all a front? Now, it's looking like the latter.

In "Siege Perilous," Arthur and David set out to find a magical toadstool (hey, we haven't had a magical fungus on OUAT before!). During this quest, David falls into the water, and he's under there for a really long time fighting with underwater knights. Like, he's down there for way too long. Meanwhile, Arthur is up on the surface, more than likely grabbing the toadstool for himself — which now looks to be correct. Having David go under was totally part of Arthur's plan to get the magical toadstool and he succeeded. Though, we don't yet know what exactly he's looking to do with the magical toadstool.

More evidence that he's probably evil? Lancelot — presumed dead — shows up at Camelot to warn Snow. He mentions that there's a villain in Camelot, and while Snow is quick to mention the Dark One, Lancelot informs her it's Arthur. He's not to be trusted.

Lastly, Arthur then kills one of his knights in the name of Camelot. Why? That's not really clear yet. But Arthur makes Percival drink some poison, and he disappears into a cloud of green smoke (which feels very Zelena-y).

Everything makes Arthur look highly suspicious. Also, do you get the feeling that Arthur actually knows more than he's letting on? I have a strong feeling that he has his memory completely intact from those missing six weeks in Camelot. I was right about my suspicion that he's up to something. Whatever he does next, I already have a bad feeling about it.