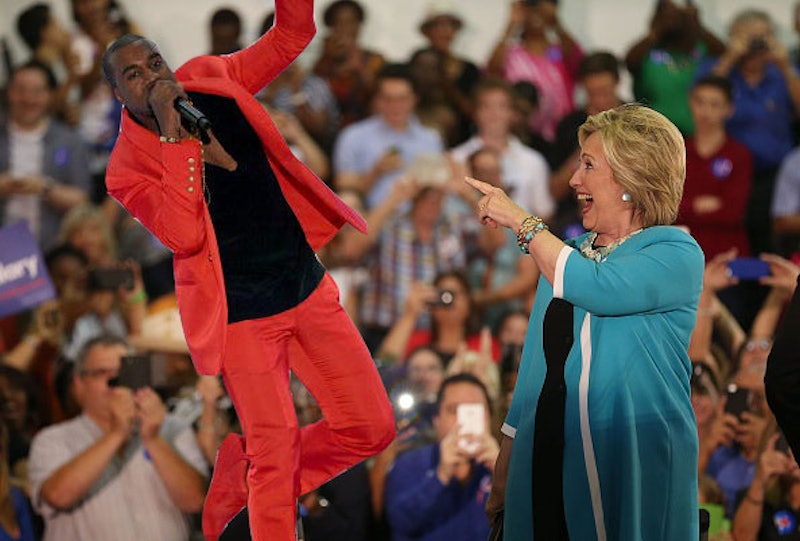 2016 might be the election on hand, but there have already been murmurs of 2020 ever since rapper Kanye West declared he would run for the White House during the MTV VMAs at the end of August. Since then, Republican frontrunner Donald Trump said he would look forward to running against West while President Obama gave a few suggestions on how to handle a life in politics. And on Sunday, Hillary Clinton joked that Kanye West wouldn't be ruled out as a candidate for VP should she face reelection.

The ribbing came during an interview with BuzzFeed's podcast Another Round, during which Clinton was asked whether she would consider being West's vice president. She pointed out that she intends to run for reelection, which means the order of names on the Dem ticket should actually be reversed.

Well, I have to say, I've told Kanye that I think that he might want to wait, 'cause I'll be running for reelection. I might want to try and give him some additional experience so he's got — on all the other things he's done on his resume — he's got you know some kind of envoy role or something that he can point to, but I would not rule out anybody.

Clinton and West appear to be on friendly terms, especially since that famous selfie from a fundraiser also attended by Kanye's wife Kim Kardashian West. And this isn't the first time Clinton has suggested West hold off another four years. In a September Vanity Fair interview, Clinton even gave a great piece of advice. "Well, if I'm going for my second term, [I would ask him] to wait four years, but if I'm not, to be sure he has comfortable shoes because there's a lot of walking involved," she said.

The former secretary of state obviously knows what she's talking about, having now embarked on a second run for the Oval Office. If Clinton ends of running for reelection, it'll be interesting to see how these friends face off — that is, if West holds up to his promise. Just last month, West endorsed Republican Ben Carson, telling Vanity Fair in a separate interview, "As soon as I heard [Ben] Carson speak, I tried for three weeks to get on the phone with him. I was like this is the most brilliant guy." In turn, Carson said he'd be open to giving West a chance as president. (Not Muslims, no. But West? Why not!)