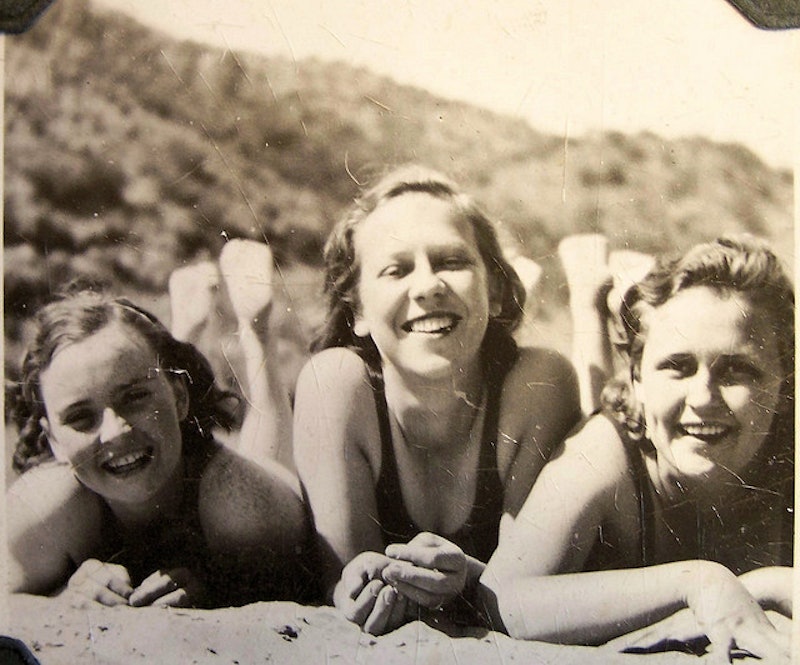 You likely have a little knowledge of old-fashioned compliments — we've all heard of "the bee's knees" and "the cat's pajamas." But in the many centuries of English slang, there are huge swathes of forgotten material. And I, for one, am all in favor of bringing some of them back.

The thing about slang from different ages is that it tends to embody the societal values of that age — so lists of British and American slang from olden times tend to be varying mixes of racist, sexist, and homophobic. No particularly heinous ones have made the list (though I suppose it depends on whether you think being called a tomato is insulting), but many of the compliments — particularly for women — are highly superficial. Needless to say, most of these are no more complex or intellectual than calling somebody "bae" or saying that they're "slaying." Human nature's always been the same, and when we want to tell somebody they're awesome, we can sometimes sound completely off the wall while doing it.

So the next time you want to tell somebody you love their walk, their attitude, their particular take on things, or just think they look amazing in those jeans, you can give them one of these straight in the kisser. You may not get much comprehension, but once you explain it, they may be flattered. Hopefully.

Meaning: A woman with a lot of spirit and a hot temper. What your grandfather would call a "firecracker." That girl you know who enters rooms dramatically, dances all night, couldn't care less about your opinion, and never seems to lack energy? She's a bearcat.

Example Sentence: "Dolores went full-on bearcat in the debating final, and overturned the table in a moment of passion."

Meaning: A fancily-dressed person, usually a man. Somebody who reads The Sartorialist and has the faintest idea of what pattern clashing and "working a piece of clothing back" mean. Often parties hard, too.

Example Sentence: "How can you still look like such a buck after dancing until 6 a.m.?"

Meaning: A generic term for an attractive woman, with the particular kind of allure and flirtatiousness that means she constantly has a ring of admirers and acolytes. Had her own table in the school lunch room, and probably has over a thousand Facebook friends.

Example sentence: "You got Tinder swiped by Prince Harry? You're such a butter and egg fly."

Cute As A Bug's Ear

Meaning: A sweet, miniature sort of cuteness. The attractiveness that comes from dimples or a fun blog or absolutely rad taste in mittens. Zooey Deschanel is probably the cutest bug's ear we've got these days.

Meaning: An amazing, excellent person. Some definitions from the time insist that this person's value lies in their amazing generosity, because they love to pay for everything when you get together, and won't hear of you grabbing the check — just once — or even going Dutch. They haven't got this job as a management consultant for nothing, you know.

Example Sentence: "He wouldn't even let us pay when we ordered truffles; what a darb."

Meaning: This one's specifically for dudes, and means one with an absolute dreamboat look. Chiselled chin, clear eyes, cheekbones higher than the Alps — they tend to stalk catwalks a lot.

Meaning: This was originally a class thing, denoting a gentleman or somebody of high station, but it evolved into meaning somebody well-dressed. If they know the difference between types of collars and actually know how to use a pocket square, they're definitely a gorger.

Meaning: A sailing term for the curls that lay over a lady's shoulders. This is the person who's never had a bad hair day in their lives, and whose partners and friends seem to spend an inordinate amount of time just... stroking their hair. And playing with it. And smelling it. Hey, it smells delicious.

Meaning: This isn't entirely a compliment, but I think it should be one. At the time, it sort of meant a young woman was "boisterous," which was code for having lots of opinions and refusing to keep quiet. If your friend's always at feminist protests, getting into arguments with bigots, and making her voice heard, she's definitely a hoyden.

Meaning: This one's kind of cute. It's what you'd use to refer to a person who's short and tiny and kawaii, but whom you don't want to insult by pinching their cheeks or cooing at them. It's also a good name for cute kids.

Example Sentence: "Who's a good minikin? Yes you are!"

Meaning: The kind of jaw-dropping dancer who's just casually been doing urban breakdancing for 10 years, but doesn't make a big deal of it until you're in the club and suddenly everybody's in a circle around them clapping.

Example Sentence: "I had no idea you were such an Oliver Twist. I thought you had two left feet!"

Meaning: An excellent person of amazing quality. It's the sort of energy we'd put into calling somebody an absolute diamond these days. Reserved for true, rare shining stars.

Example Sentence: "I take you, my oyster, to be my wedded wife."

Meaning: Named for the crisp, fresh variety of English apple, a pippin is just a good person — high morals, can be relied upon to get you out of sticky situations, always knows who's holding the best parties and where, and can totally get you invites.

Example Sentence: "Beyonce tickets? You are a pippin."

Meaning: This one was originally meant only for women, but it seems easy to make unisex. It basically means the aesthetic cream of the crop — the most beautiful person in the room, the stunner you'd be lucky to talk to in a million years.

Example Sentence: "I will be the prime article at this party, and you'd better believe it."

Meaning: "Sauce" was another word for what we'd call sass these days. A saucebox is usually somebody young who's always got awesome comebacks that tend to go viral if they're captured on social media.

Example Sentence: "Oooh, that saucebox shut you down!"

Meaning: A specific sort of alluring woman with the kind of raunchy sex appeal that makes everybody, including inanimate objects, weak in the knees. Salma Hayek is a Sheba.

Example Sentence: "She's such a Sheba that I can't even talk to her without sweating through my clothes."

Meaning: Yep, you guessed it: another term for an attractive lady. But this one also seems pretty gender-neutral. If you look ripe enough to bite into, you're a total tomato.

Example Sentence: "That shirt makes you look like such a glorious tomato."

Meaning: From card playing, this is a term for a top-marks person — attractive, fun, smart, and cool. Alas, how times have changed. The Donald may mean this word never really recovers its original meaning.

Example Sentence: "I'm the trump in this group, and don't you forget it."

More like this
These 3 Signs Are Most Likely To Be In A Love Triangle — Here’s Why
By Kristine Fellizar
The 4 Zodiac Signs Most Likely To Chase You, According To An Astrologer
By Kristine Fellizar
18 Hinge Prompt Answers To Try If You’re Looking For Something Casual
By Lexi Inks
12 Aphrodisiac Desserts To Spice Up Your Valentine’s Day
By Kaitlyn Wylde
Get Even More From Bustle — Sign Up For The Newsletter
From hair trends to relationship advice, our daily newsletter has everything you need to sound like a person who’s on TikTok, even if you aren’t.