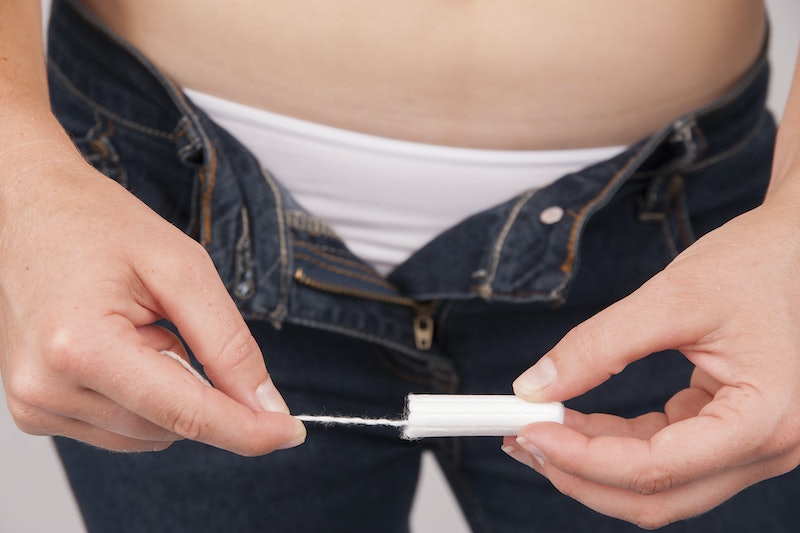 Our lady parts weren't given to us with a how-to handbook, so we do the best we can with what we know, and try to keep learning. Even though those boxes of tampons we've come to rely on during our periods do include an instructional guide, that doesn't even give us all the information we need. But American women have earned the right to know more about how to use tampons effectively.

After all, if you combine all the feminine hygiene product sales in the United States in 2014, tampons come in second place as the most popular vagina-related merchandise. A whopping $1.04 billion was spent on them throughout the year, second only to the $1.64 billion dished out for sanitary napkins and liners.

Yet, were you taught how to properly use tampons when you were in 7th-grade health education class? Probably not. Neither was I. And the same goes for way too many women. Not to worry — this article is a good place to start.

Here are 11 subtle tampon mistakes you and heaps of other women might be making, as well as instructions on how to remedy them.

1. Not Washing Your Hands Before And After Insertion

This is not to be taken lightly — your hands are covered in bacteria, and not the good kind! If you don't thoroughly lather up before you insert that trusty tampon, you might transfer some unwanted nastiness to your lovely vagina. Most of us have gotten into the habit of only washing our hands after we're done with the insertion process. But it's just as important to complete this task on both ends of the operation.

2. Using Only One Size

I used to have this bad habit (and I'm sure I'm not the only one): I would only purchase Regular tampons, no matter my flow. But I recently learned that size truly does matter. Buy a variety pack, and pick your poison according to how your cycle is doing. For your heaviest days, choose a Regular (you might have to change it more often, but that's a good thing), and save some Juniors around for your lighter days. You'll reduce your risk of leakage and/or that really uncomfortable moment when you try to remove a too-dry tampon. Eek.

3. Inserting A Tampon When You're Not Bleeding

I hate to be the one to break this one to you, because you're probably proud of yourself for being proactive by putting in a tampon a day before or after your period, just to be safe about it. You might also use one when there's a bit of discharge you want to keep off your undies. Neither practice is for your vagina, however. You could develop an infection because the acidity levels of your vag get out of whack, and there is unnatural chafing taking place. Use a panty liner instead.

4. Not Inserting The Tampon Far Enough

If it's in, it's in. Right? Eh, not exactly. You shouldn't be able to feel your tampon in there. If you can sense it at all, or if you can feel it just at the opening of your vagina, it means you haven't situated it up the canal far enough. Next time, don't be scared to push the thing in a little bit further. You'll thank yourself for it later.

5. Not Changing The Tampon After You Poop

Yep, we're going there. When you poop, your tampon gets a bit dislodged. Sometimes, it even gets pushed out all the way. Say it doesn't, though, and you just readjust it after a BM. Well, if the string picks up any bacteria (again, not the good kind), you could be facing an infection in your vagina later. Make a mental note: Pooping means a brand new tampon.

After you're done with the applicator, regardless of whether it's plastic or cardboard, it unfortunately needs to go in the trash bin, not the recycling. This is due to the fact that there is blood and other bodily fluids on it, so it's considered unfit for recycling. If you're worried about your carbon footprint on planet Earth, then consider tampons without the applicator, or a menstrual cup.

7. Storing Them Near Water

I have a feeling that we're all guilty of this one. The most obvious place to store a box of tampons is under the bathroom sink. It's time to retrain ourselves, though, because tampons are meant to be stored away from water and dampness, not near them, as humidity can damage them. Yep, that means the handy little cabinet between your toilet and shower is an ill-advised spot, too.

8. Using Tampons That Have Torn Wrappers

Even the smallest of tears in that pink wrapper can compromise the purity of the tampon. The reason it's sealed in a little cocoon is to protect it from the germs that are flying around left and right when it's stored (think about all the week-old crumbs and makeup particles in your handbag). If the packaging is ripped open in the slightest bit, you could run the risk of putting that mess into your vagina.

Tampons don't actually expire! So even if the fluorescent-colored wrapper has faded a bit and it no longer looks very perky, use it anyway — as long as it's not ripped, as we just covered above. If you've done your job correctly and kept them in the right storage area (remember, dry and clean), then you should never have to toss them in the garbage.

Any feminine hygiene products with a flowery smell shouldn't be anywhere near your pussy. They're most likely made from artificial components, as well as chemicals that you don't need to put inside your body. They can actually make you smell worse. Plus, you might run into undesired discharge and itchiness — or even an infection from thrown-off pH. Grab the unscented variety the next time you're at the pharmacy.

11. Not Changing Your Tampon After Being In The Water

Whether it's a visit to the hot tub, a dip in the ocean, or even a longer shower, you're making a mistake if you don't immediately swap out tampons. Dirty water attaches itself to the string, which irritates the skin. Those same mean bacteria could find their way into your vagina. Cue a nasty infection.