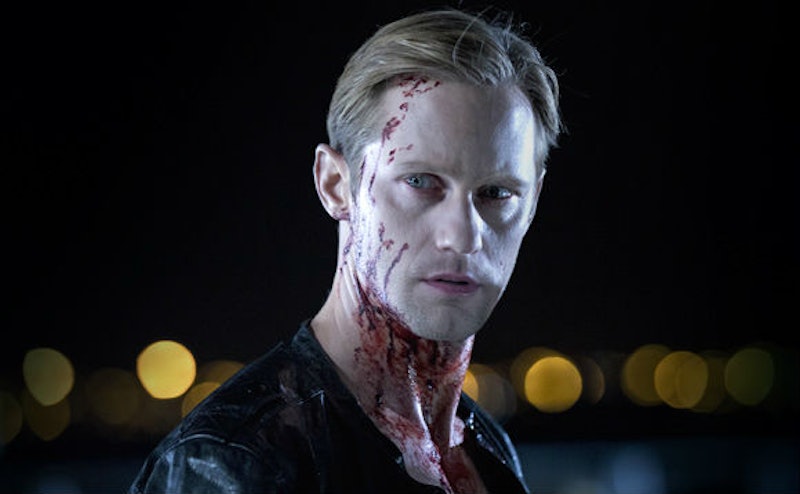 True Blood is a fountain of gratuitous sex, often playing with the delicate balance between willing reluctance and unbridled passion, but more often than not we know where the line is. And that's saying a lot in a world where the realm of sexual activity is broadened to include biting, scratching, and all other forms of sexual blood-sucking. Still, we used to know where the kinky stuff ended and where the sinister, unpleasant, stomach-turning scenes began. Suddenly, that all seems very unclear and it's all because of Eric Northman.

The transformation of everyone's favorite undead Norseman has been one of the more rewarding story arcs in a series that continually throws blood at the wall without even caring whether or not it sticks. When we first encountered him, he was the sort of vampire who'd glamour some vamp-tourist at Fangtasia into being chained up for a little jackhammer sex in his basement, among other sinister qualities. When Sookie tamed him, so to speak, he became a fuller character. He still had a violent, Machiavellian mentality about him, but he retained a piece of the personality he displayed as Sookie's temporarily domesticated puppy. In essence, he was the perfect bad boy for a hungry True Blood audience. By Season 6, Episode 3, one false move has brought all that progress into question.

Eric, driven by the demoralizing claim by the Governor's troopers ("You have no rights, vamper."), visits the Governor's daughter Willow in attempt to use her against her father. In the initial stages of his plan, his anger drives him to go with a simple idea: rip her to pieces. However, it's the way in which he goes about it that's irksome, that signals that our Eric has departed, and that this vampire war has replaced him with someone else.

As Eric approaches Willow in her girlish bedroom, her lips painted scarlet and her virginal white nightgown flowing in the night, we're brought back to the classic vampire seduction: Mina Harker and Dracula. In Bram Stoker's novel, Dracula's bite was dripping with inherent sexuality, thus making the pure Mina a prime target. Here, Willow occupies a similarly innocent role, only Eric's violation goes beyond the implied sexuality of the neck bite: he threatens her as teardrops well up in her eyes, saying he's going to tear her apart "down here" ostensibly grabbing at her nether regions before leaning down to deliver the killer bite to her femoral artery. It's wildly violent and leans heavily towards the more sinister side of vampirism.

The process of drinking another person's blood is more sexual on True Blood than it was in any canonical novel assigned in high school. There's a reason that Bon Temps' human-blood-bag-for-hire service sends girls who looked like they used to hang out with Vivian Ward on Hollywood's seedier streets: feeding is a sort of sex act. There's a reason most evil vampires feed without permission: it makes their assault that much more unforgivable. And there's a reason vampires who are extremely turned on by their sexual partners feed on those partners during intercourse: feeding. is. sexual.

That's why Eric's method of choice when he thinks he's about to kill Willow is so disturbing: it's an extreme violation, not just a revenge killing. Yes, the Governor would be upset that his virginal daughter was killed sexually and the emotional impact would be greater. Yes, Eric eventually thought better of killing her... for now. Yes, the duo shared a tender moment when sleeping together in a coffin. However, the fact that Eric could go straight to not only murdering, but sexually violating a young girl in order to accomplish that murder and get back at her father is absolutely disgusting.

True, there is an understanding on this show that our reality has changed. Vampires are being hunted with weapons they can't possibly match. They're being forced into corners and holes. They have no food because there's still no Tru Blood being made. Times have become far more desperate, but we haven't entered an alternate universe. Eric is still supposed to be someone we root for, even if we occasionally don't like to admit it. He's always at least 51 percent good. But this proclivity for a violation of that caliber is frankly out of character at this point in the series.

Perhaps this disturbing shift of character is meant to show us just how heavily this new world order is affecting our handsome vampire. But, if True Blood history has taught us anything, this unsavory bit of dialogue was just an excuse for the writers to turn a PG-13 situation into something a little more sexual and a little more R. It's yet another way in which True Blood continues to make unwieldy turns in a chasm of disappointing episodes, and it's no good.

More like this
What Makes A Sally Rooney Sex Scene So Hot?
By Samantha Leach
The 'This Is Us' Finale Featured An Adorable Season 1 Jack & Rebecca Easter Egg
By Grace Wehniainen
What Does Michael Peterson’s Family Think Of 'The Staircase'?
By Arya Roshanian
Everything To Know About ‘The Handmaid’s Tale’ Season 5
By Amanda Whiting
Get Even More From Bustle — Sign Up For The Newsletter