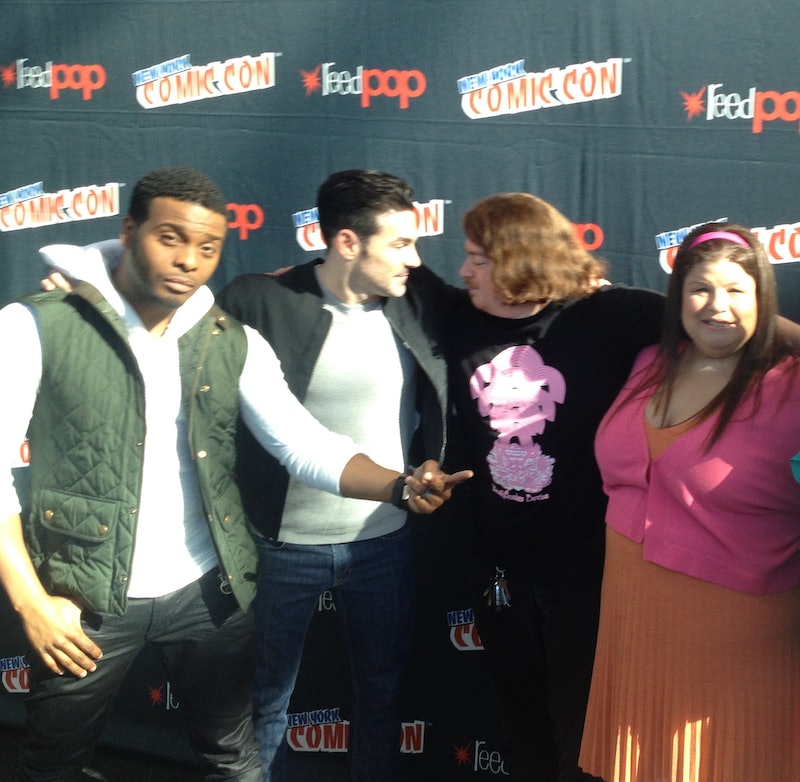 Aw, here it goes. Or, rather, there it went. As everyone has heard by now, there was a reunion of the All That cast at New York Comic-Con over the weekend, and Kel Mitchell, Lori Beth Denberg, Danny Tamberelli, and Josh Server were basically making everyone's childhood dreams come true by reuniting. In fact, they were making their own dreams come true. As Server told reporters, New York Comic-Con 2015 was like a "high school reunion for kids who didn't get to go to high school. Or college in some cases. Or any redeemable educational facility of any kind." So, you can tell right from the start that not a single member of the cast has lost their comedy chops over the 21 years since the show aired its first episode. Even better, the fact that the show has such an enduring legacy is a humbling experience for these children-turned-adults.

"It is amazing," said Server. "You don't realize that you're part of something like that. We were kids. So you don't know that you were part of something so special when you were doing it, so now to have it be relevant 20 years later, I'm so grateful." Mitchell agreed with him, adding, "It's cool to hear people say 'oh you're a part of my childhood. You know, I was having a bad day as a kid, and I'd rush home and watch your show and my day got better.' It's awesome hearing that, and then to have them still love it. I get stopped at red lights all the time, and it's like 'Do the Good Burger thing!'"

Tamberelli and Denberg had their own respects to pay to the show, and awe over the lasting impact that the show has had on so many people — a lasting impact that they both relate to on a personal level. "I think it's great. It's nice to know that it means so much to people. 99 percent of the people I meet will be very grateful," said Tamberelli. "I was a kid growing up and watching it as well, and it affected me in a similar way, so it's nice to have that mutual appreciation."

Dernberg said, "It's very gratifying because TV was really important to me when I was a kid, and so when people come up to me and say you were such a big part of my childhood, you made me laugh, how much the show meant to them, it resonates with me a lot." Of course, it wasn't just the show that resonated a lot with people. The four actors basically represent a piece of everyone's childhood, and, even though I'm no longer a child, I was curious to know what they've all been up to since their All That days. Check out what they told reporters below.

"I'm doing stand-up as well [as his current role on the Nickelodeon show, Gameshakers]. Hitting a lot of different colleges and different clubs, you can go on kelmitchell.com and see where I'm at next. I'm also on Veggie Tales. I play this little pea."

"I stopped acting for a long time, and I realized pretty much in the last couple of years that I've really wanted to start doing it again at a high level. So I've really been focused just this last year on coming back, revamping my team. I just did a movie couple months back called Uploaded . I'm shooting another movie at the end of this month. So, just getting back in the swing of things."

"I will very soon be on Man Boobs Comedy. I have a writing partner, and we write just a wide variety of things. We were copywriters together at an ad agency; he's actually my oldest friend ...We just have a comedic chemistry that's always been there, so we write together. My favorite thing that I do professionally is I officiate weddings. I'm a wedding officiate, I'm an ordained minister, and I just love it. I write personalized wedding ceremonies for each couple and it's a really special thing to be a part of. I just love doing it."

So, there you have it. Despite how long it's been since the show was on the air, it's great to know that the actors that grew with us on the show that was one of our favorites are still doing so well personally and professionally. But what are our chances of seeing an All That reunion anytime soon? As Server told Bustle, "You never know what's going to stick with people. I do feel like there's a core audience." Then, he asked Mitchell, "Would you do it if they rebooted it?"

"Do a reboot?" Mitchell echoed with a grin. "Let's do it. Except we have to wear the exact same outfits from back then." I mean, I don't know about you, but I would definitely still watch it, and I'm more than sure it would still be all that.