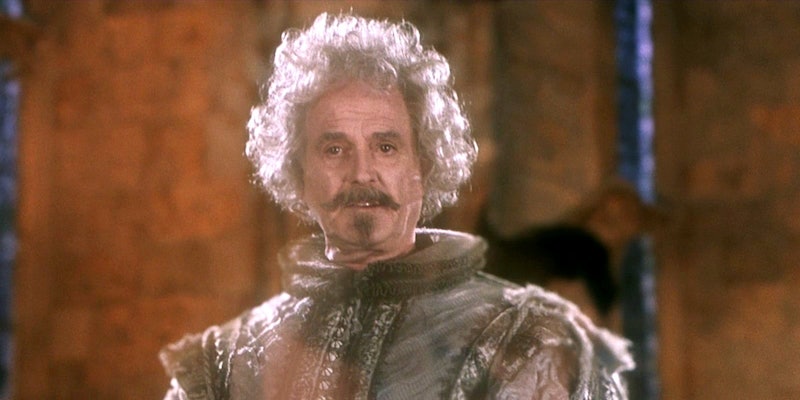 The Harry Potter series is so incredibly rich and full of about a billion subplots, characters, and magic creatures. It seems like it'd be incredibly hard to keep track of it all... but, mostly, we do a pretty good job. Who can forget reading about Harry's first broomstick ride? Or when he bought his first wand? Who can forget that life-changing birthday when Hagrid said "Yer a wizard, Harry"? No one, that's who.

We can also be honest with ourselves, though: with all the content in this series, how could we possibly remember it all, down to the tiniest minutiae? I mean, with all the characters that populate the universe, it's hard to even remember first names half the time (Hagrid's is Rubeus, by the way, and I had to look that up.)

You may not need a gigantic book to remember all there is to remember in this series, but just in case you have forgotten a thing or two, let me jog your memory a little bit. I've compiled a list of 10 moments from the books that you might have forgotten — but are definitely worth remembering.

The reader's perception of Sirius Black varies wildly in the first three books, and especially in Prisoner of Azkaban, when it seems to vary every few pages for a while. However, it's easy to forget that in the very first chapter of Sorcerer's Stone, Hagrid uses Sirius' own flying motorcycle to deliver baby Harry to Privet Drive. It's an interest glimpse into the very small window of Sirius' life between the death of the Potters and his twelve year imprisonment in Azkaban, made even more interesting by the fact that the motorcycle had made an impression on Harry, who used to dream about it while he was growing up.

The ghosts of Hogwarts always seemed to just sort of be there (that is, until the big revelation of Ravenclaw's Grey Lady in Deathly Hallows), but they were nevertheless incredibly fun parts of the books. Nearly-Headless Nick, the Gryffindor ghost, often played a larger role than the others. We've seen his Death-Day Party on Halloween (which does mean that he died on the same day as Lily and James Potter), we've seen his struggles to get into the Headless Hunt, a society of decapitated ghosts, and also witnessed as he fell victim to the basilisk. However, one might not remember a small scene in Order of the Phoenix, when, in the middle of mourning Sirius Black's untimely death, he asks Nick if it's possible that Sirius could have come back as a ghost. It's a tiny, heartbreaking scene, featuring a conversation that Nearly-Headless Nick has probably had to have many times before.

Although the Marauders are a beloved part of the Harry Potter fandom, it's hard not to remember that they were also kind of jerks, and especially towards future potions master Severus Snape. Out of all the horrible things that Snape can't forgive James Potter for, the biggest one is that he saved Snape's life when he worked to stop a transformed Lupin from killing him. Let's not forget, however, that Sirius Black was actually the one to set it all up in the first place. When reading Order of the Phoenix, it's easy to feel sorry for Sirius and dislike Snape for taunting him about his confinement, but what would you do if you had to come face to face with a guy who seemed to dislike you so much that he was willing to force his own friend to murder you in a gruesome way?

Due to her status of not actually being in the films at all, it's easy to forget the house elf Winky in general, even though she had a tremendous impact on the rest of the series. The house elf of the Crouch family, Winky was utterly devoted to her masters and would do anything for them, but due to a series of increasingly complicated cover-ups regarding young Barty Crouch Jr., Winky was freed and spiraled into a terrible depression. This callous treatment of her caused Hermione to begin the Society for the Promotion of Elvish Welfare (S.P.E.W.), which carried on for the rest of the series. If the reader can remember all that, it's possible that they might not remember what became of Winky after Goblet of Fire. Employed by Hogwarts, Winky developed a crippling addiction to butterbeer, which continued to stick with her for the rest of her life in varying intensities. It's a strange and sad story that does have a bit of a happy ending, as she stands with Kreacher during the Battle of Hogwarts and slowly begins to accept her new job at Hogwarts.

Dudley Gets Into Boxing

Dudley is best remembered as Harry's terribly spoiled, morbidly obese cousin who has a terrible attitude problems. As each published book grew larger, so, it seemed, did Dudley, culminating in an attempt at a diet during Goblet of Fire. All of that, however, changed by Order of the Phoenix, where Dudley took up boxing and subsequently lost weight, becoming more of a bruiser than ever. It may not be as interesting a forgotten moment as some of the others on this list, but Dudley's character arc from spoiled child to big guy just trying to become a decent person is still pretty interesting, all things considered.

Most likely forgotten because this incredible moment did not make it into the movies, Luna Lovegood has a tiny, incredible moment in the sun when she is picked to comment on the Quidditch matches after Lee Jordan is gone. Using her spacey, dreamy, completely unfiltered style of speech to commentate, it's definitely one of the funnier moments in a series that grows increasingly dark. J.K. Rowling herself said that writing Luna's commentary filled her with "fiendish glee."

The Wizard Relationship With The Muggle Prime Minister

As the books in the series grew longer and more complicated, readers were treated to opening chapters that didn't follow the third person limited structure that focused on Harry's thoughts and experiences. One of the more interesting chapters in Half-Blood Prince starts at the very beginning, when the Muggle Prime Minister is approached by ex-Minister of Magic Fudge to be filled in on the magical crises happening all over Wizarding England. It's a small chapter, and while it's easy to get lost and forgotten in the rush of the deaths, betrayals, and romance that filled Half-Blood Prince, it does give the Wizarding world quite a bit of fascinating dimension.

Fleur Delacour Standing Up To Molly Weasley After Bill Is Injured

Out of all the couples that emerge from the Harry Potter universe, Bill Weasley and Fleur Delacour are my favorite. This sleeper couple met way back in Goblet of Fire, but didn't become a part of the plot until two books later, when in Half-Blood Prince gave the spotlight to how little Mrs. Weasley (and Ginny) actually liked the eldest Weasley child's fiancée. This is all turned on its head in the final pages of the book, when Bill is attacked by the terrible Fenrir Greyback, and will be disfigured for life. When Mrs. Weasley insinuates that Fleur's feelings might have changed now that Bill is contaminated with the werewolf disease, Fleur goes on an impassioned tirade about how she doesn't care what Bill looks like, thus finally gaining Mrs. Weasley's respect. It's a beautiful moment that's often forgotten in the shadow of Dumbledore's death and the immediate revelation of Tonks and Lupin, but it's a really beautiful moment in the series.

Stan Shunpike is an easy character to forget in general, but he's been mentioned at least once per book since Prisoner of Azkaban. More than just the conductor of the Knight Bus, he was unfortunately cursed with a tendency to stretch the truth, if not outright lie. In Half-Blood Prince it was reported that he was arrested under suspicion of being a Death Eater and imprisoned in Azkaban over it, becoming a point of contention between Harry and the newly appointed Minister of Magic Rufus Scrimgeour. Harry refused to become the poster child for the Ministry due to his reluctance to believe that Stan could actually be a Death Eater, and Scrimgeour was hesitant to release Stan due to the Ministry's need to look as though they were making progress. In later books it's revealed that Stan was actually a Death Eater under the Imperius curse... so in the end, who was right?

The memorial In Godric's Hollow

Godric's Hollow is a little town in the West Country of England, and probably one of the most famous little towns in the history of the Wizarding world. It's not only the birthplace of Hogwart's founder Godric Gryffindor, but also was the hometown of Albus Dumbledore and his family, thus making it the site of an infamous three-way duel between Dumbledore, his brother Aberforth, and the notorious dark wizard Gellert Grindelwald. Most importantly, however, it was the site of the tragic deaths of Lily and James Potter and Harry's former home, a place he doesn't visit until Christmas of 1997, during Deathly Hallows. While the ensuing scene with Bathilda Bagshot is a hard thing to forget, there was also a small scene where Harry and Hermione visit the ruin of the Potter's cottage, kept in its original state as a memorial to the Potters, featuring a sign that has been covered with messages from various wizards to support Harry. It's a very short scene, but also very meaningful and real.

More like this
Rupert Grint Just Shared A *Major* Update About Ron Weasley’s Future
By El Hunt
'Mayfair Witches' Already Changed 2 Major Characters From The Books
By Grace Wehniainen
Prince Harry Incorrectly Recites Christina Aguilera’s “Genie In A Bottle” Lyrics
By Jake Viswanath
Everything To Know About The 'Daisy Jones & The Six' TV Series
By Maxine Harrison and Brad Witter
Get Even More From Bustle — Sign Up For The Newsletter
From hair trends to relationship advice, our daily newsletter has everything you need to sound like a person who’s on TikTok, even if you aren’t.