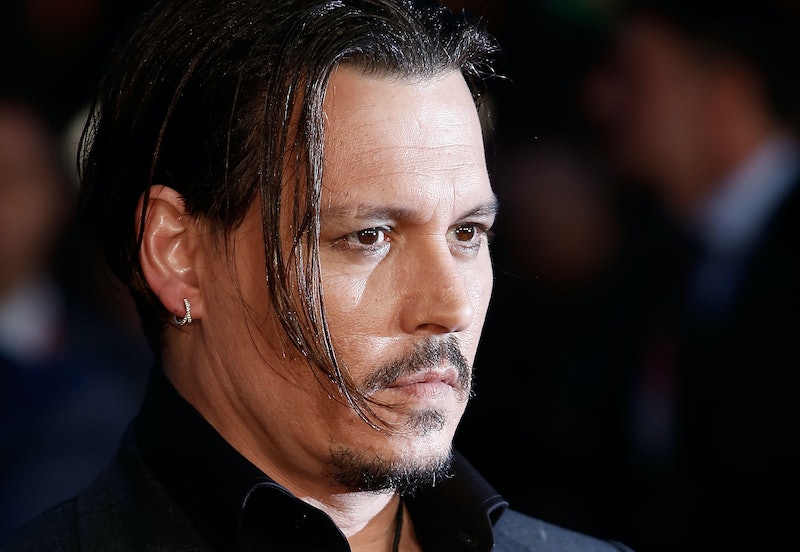 Johnny Depp joins the ranks as one of those perennial Hollywood phenomenons that have been around for decades, done incredible work, and still have never won an Oscar (see: Leonardo DiCaprio, Tom Cruise, etc.). In fact, Johnny Depp doesn't even want to win an Oscar. Even though he's not too worried about not being a Oscar-winner (Depp told BBC at the London Film Festival, "I don't want to win of those things ever, you know"), I'm going to go out on a limb here and say what we're all thinking: Johnny Depp deserves an Oscar.

Depp also explained to BBC that, for him, “a nomination is plenty.” That's humble and adorable, and reminds us that, yes, he has been nominated for three films (Sweeney Todd: The Demon Barber of Fleet Street, Finding Neverland, and Pirates of the Caribbean: The Curse of the Black Pearl), but still. I'm going to argue that it's not enough. Because, even though Johnny Depp doesn't want an Oscar, he should still get one. Depp has done some important and groundbreaking work in his film career, and I'd hate to see that go unnoticed. Though he doesn't particular like the competitive nature of the Oscar race — and I get that, while also finding it commendable — I still think credit needs to be given where credit is due.

Depp insinuated that his performances always take the priority. He said to BBC as well, “I just stick to my guns and do what I want to do." Well, Depp, doing what you want to do coincidentally just happens to be what I wanted you to do too. Let's recount all your most glorious, Oscar-worthy roles, because, even if you aren't particularly saddened that they never won, I am.

Though most people will revere Leonardo DiCaprio's role as the mentally handicapped younger brother of Gilbert, it's Depp's much quieter performance as the main character that really sets the tone of the movie. Depp seems to specialize in playing the outsider, but his appeal in this film stems from the fact that, as a character, he's especially self-aware of the exclusion and doesn't seem to mind.

Depp starred as Donnie Brasco, opposite Al Pacino, in this crime drama from 1997. Depp's tightly wound performance as Brasco infiltrates the tense bond between the two male leads and makes for an unforgettable film.

Tim Burton's 1994 film stars Depp as the titular character Ed Wood, a famous Hollywood filmmaker. In what could have easily been a mockery of Wood's lifestyle, Depp plays the director with authenticity and fondness.

Benny & Joon is a quiet little film, but a charming one nonetheless. Depp plays Sam, a young Charlie Chaplin-esque goofball who falls in love with Joon. But here's the kicker: Depp gives an almost wordless performance that relies heavily on his physicality, and let's just say that it hits the mark.

The film might not have done so well with the critics, but its ability to remain iconic 17 years later must speak to something. Based on the book that's more or less written in stream of consciousness, Fear & Loathing in Las Vegas doesn't stray far from the aesthetic of being absolutely disintegrated in forward motion plot. However, Depp as Raoul Duke gives an haunting portrayal of an unencumbered journalist during his descent into mania, and that's something worth applauding.

It's hard to imagine an actor that would have given Edward Scissorhands a more genuine sympathy than Depp. It's the story of an outcast trying to find love, but it's Depp's portrayal of Edward that really makes this one a classic.

The 1990 John Waters musical stars Depp at his hunkiest, as a leather jacket wearing bad boy, and, let me tell you, even though Depp personifies teen angst, his presence within the film nothing is nothing but positive. Despite Depp being only 26 when the film hit theaters, the performance he gave was hugely indicative of the massive success he would go on to achieve.

If the critics' reviews of Depp's performance in his newest film, Black Mass, have been any indication, then yes, it looks like Depp might just walk away with a win this year. And, unlike Depp's previously nominated performances, his role as James "Whitey" Bulger already boasts itself as something different because it's based on fact. We all know how much the Academy loves that (and a good old set of prosthetics), so here's to hoping this one will lend him a win.

I'll be patiently waiting (i.e. re-watching all of these films over and over again/crossing my fingers) until this year's Oscars ceremony.