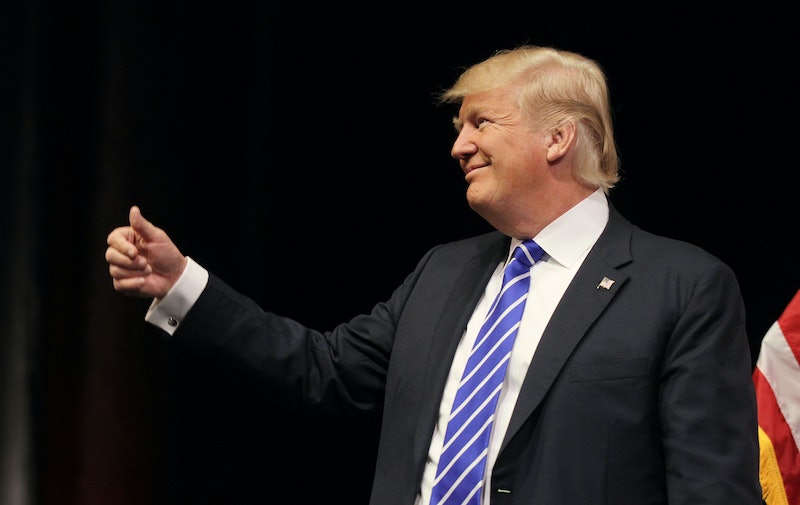 As Coolio once said in the theme song of the classic '90s Nickelodeon show Kenan & Kel, "Awwww, here it goes": Donald Trump, the man, the myth, the legend, the living Troll doll, is hosting Saturday Night Live on Nov. 7 with musical guest Sia. LET THE GAMES BEGIN. If you don't remember, Trump hosted Saturday Night Live back in 2004, in an episode that included one of my favorite sketches ever: "Donald Trump's House Of Wings," (which has sadly disappeared from the 'net.) But, this time, the stakes of his hosting are different: It's entirely possible that Trump took his hosting opportunity in an attempt to endear himself to the American public as the potential Republican presidential nominee. Though I'm not sure that the SNL stage is the best place to do it, I know I will certainly be watching. Though the real estate magnate's upcoming hosting gig is far from the first time a candidate has appeared on the sketch show, surprisingly, not many presidential candidates have actually hosted SNL in the midst of an election season.

Many politicians have hosted the show throughout the years, including longtime U.S. Senator John McCain in 2002. And nearly all of the presidential candidates have appeared on the show in cameos during election years. There have been the incredibly memorable cameos from politicians like President Barack Obama, Sarah Palin, and of course Hillary Clinton, who recently shined in her appearance as a bartender opposite Kate McKinnon.

But, which presidential hopefuls have actually hosted the show all the way through while they were vying to run as the leader of the free world? There have only been a total of three:

The first candidate to host SNL was Ralph Nader way back in 1977 — which was also the first time that Bill Murray appeared on the show. Nader was actually great: He donned a cowboy get-up and "cut loose." He also had a surreal dream about Jimmy Carter, then the president-elect.

The Reverend Al Sharpton guest hosted in 2003, when he was up for the Democratic nomination. Of course, it was the perfect opportunity for SNL cast member Tracy Morgan to show off his spot-on Sharpton impression, when he appeared alongside Sharpton in his opening monologue.

The last Republican hopeful to host SNL was Steve Forbes (yep, the same Forbes from the magazine, Forbes), in 1996. Forbes was no where near securing the Republican nomination at the time that he hosted, but it's worth noting that he and Trump do share similarities: namely, lots and lots and LOTS of money. The musical guest on the night of Forbes' guest-hosting gig was Rage Against The Machine, whose performance of the song "Bulls On Parade" was enough to anger NBC, and get them reportedly forever banned from returning to SNL .

It's worth noting that Republican nominee Mitt Romney was reportedly offered an opportunity to host by Lorne Michaels in 2011, but he turned it down.

Trump is hosting on November 7 with musical guest Sia, who is known for her conceptual and avant-garde performances on stage. Will she protest the politician during her appearance? It's hard to say, but she wouldn't be the first. Trump made an appearance on The Late Show With Stephen Colbert in September during which musical guest Raury protested Trump by wearing a Mexico jersey with Trump's name crossed out.

Personally, my only hope is that there is a reprise of "Donald Trump's House Of Wings." Live, from New York: it's gonna get interesting.

More like this
Everything To Know About 'The Undeclared War' Season 2
By Rachel Mantock
'The Undeclared War' Took Inspiration From This Gavin & Stacey Location
By Maxine Harrison
Police Shove 'Full House' Star Jodie Sweetin At An Abortion Rights Protest
By Radhika Menon
Here’s How Lizzo Is Supporting Abortion Rights After The Roe v. Wade Reversal
By Brad Witter
Get Even More From Bustle — Sign Up For The Newsletter