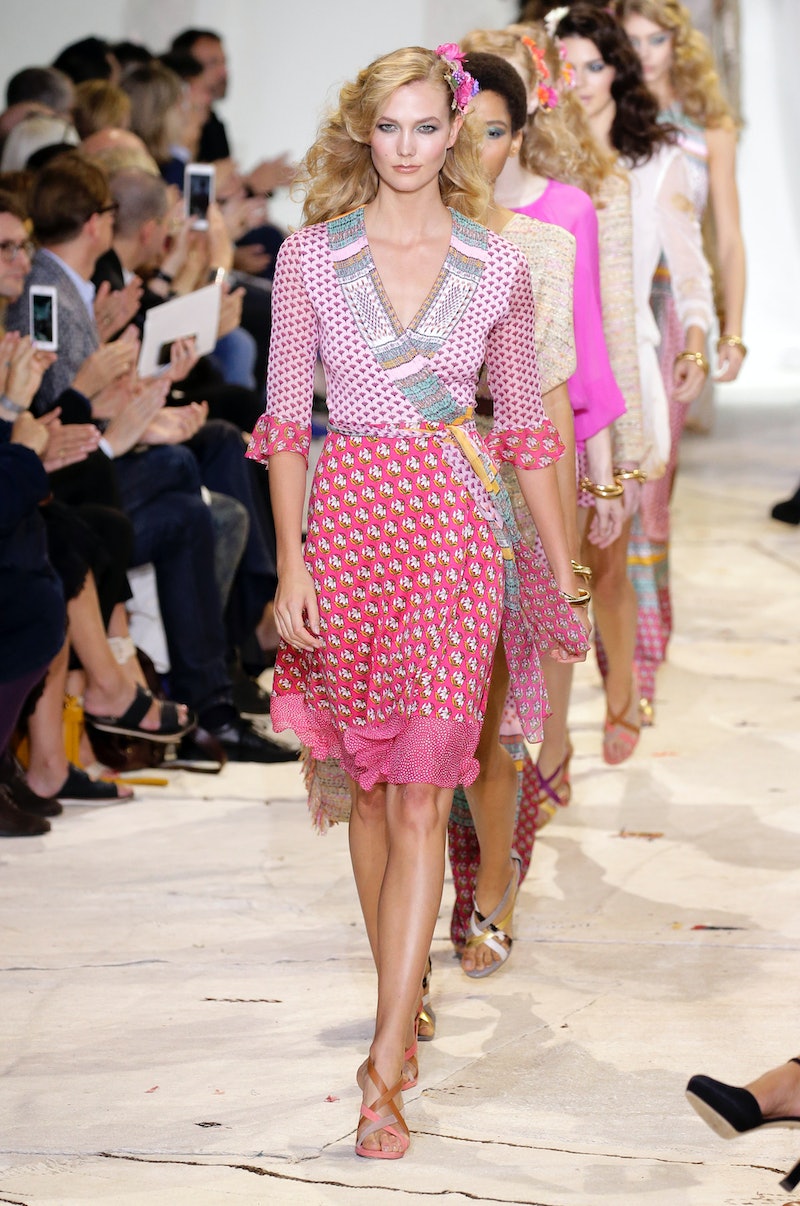 Beneath the main image on New York Fashion Week's website, there's a roundup of 12 models wearing different designers' blue crush-worthy looks from this September's event. One glaring issue, though: Just two of those models are non-white. Unfortunately, that's pretty representative of Fashion Month in general. Just like every other year, the Spring/Summer 2016 shows were lacking major diversity — nearly 80 percent of the models were white in the most recent Fashion Month, according to a report by Business of Fashion.

The site took into account 117 major shows from New York, London, Milan, and Paris, and they found that 79.4 percent of the models who took the catwalk were white. Just 797 of 3,875 models were considered non-white (meaning black, Asian, non-white Hispanic, and other) according to BoF. Their report showed that 10.2 percent of the total bookings surveyed were black models, 6.5 percent were Asian, 1.6 percent were non-white Hispanic and 2.3 percent were considered "other" (including Indian and Middle Eastern models.)

Is it just me, or have I read (and written) this story before? The lack of diversity in the fashion industry has been well documented, but the lack of change is what we really need to be talking about.

As BoF points out, this isn't a new trend: the Fall/Winter 2015 shows last spring mirrored this year's diversity reports, with just 20 percent of the models being part of a minority group. And as much as industry watchers talk about it, and even industry insiders (before this year's New York Fashion Week, Diane von Furstenberg and Steven Kolb asked CFDA members to consider diversity in their castings), what about action? As far as change goes, there hasn't been much.

Jezebel pointed this out in a report last year, when 78.69 percent of the models in the Fall/Winter 2014 shows were — you guessed it — white. Granted, both Jezebel and BoF acknowledge that their calculations take into account just part of the total shows from fashion month. Still, it's not hard to see that there's a serious issue at play.

One analyst theorizes that the lack of diversity is due, in part, to luxury fashion representing an ideal that's unattainable for most, and therefore realistic expectations are left at the door. “Fashion isn’t about selling real life,” Reina Lewis, professor of cultural studies at London College of Fashion, told BoF.

Clearly, the issue is bigger than just deciding to include more models of color on catwalks and in campaigns. The problem lies in what our culture sees as ideal — young, skinny, and white, BoF points out. But as a driver of culture, the fashion industry has a major responsibility to do its part to change that. The process may be slow, but undeniably worth it. Everyone just has to make the decision to try.