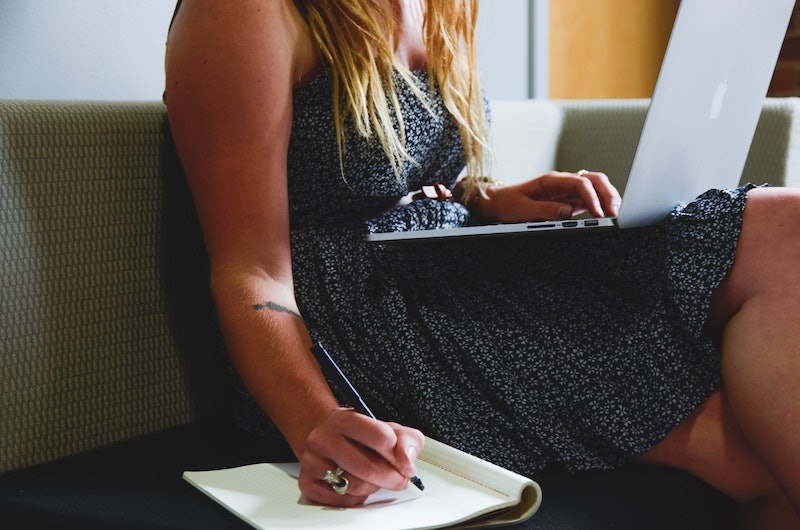 To put it bluntly, online dating can be a mess, especially in a huge metropolitan area. With such a high volume of people viewing your profile, it's pretty much inevitable that you'll get dozens of creepy, offensive, or just plain bizarre messages. Understandably, it's easy to get overwhelmed — and give up entirely on finding love online — what with all the online dating mistakes people consistently make.

In her new book Popular , Lauren Urasek, a 25-year-old science enthusiast-turned-makeup artist, details the complicated, frustrating, and — at times — magical world that is online dating in NYC. After a 2014 New York Magazine article named her OkCupid's "most popular woman in New York City," Urasek's previously normal life turned upside down, and she was suddenly bombarded with media requests, reality TV offers and, of course, a book deal.

Before her unexpected fame, Urasek kept a blog chronicling ridiculous messages she received, called They Really Said This. Like me, she's been in the online dating game for years, and knows a thing or two about absolute no-no's when it comes to maintaining an online dating profile. Here are six things you can do to improve your chances of finding love in the digital world — take notes.

You would think this would be common sense, but I've seen many men online who simply don't seem to understand anything about good lighting, flattering angles, and, ahem, appropriateness. Urasek urges you to put in a little effort, and upload high-quality photos. Her rules are simple, but bad photos are still a common plague of online dating. For starters, avoid group shots and sunglasses-obscured selfies, as well as pictures that are more than a year old, pixelated, or heavily filtered. Having more than three photos that are crisp, clear, and accurately represent what you look like day-to-day will ensure that your date won't be left thinking "WTF" when they meet you IRL.

Seriously, taking the time to spellcheck your messages matters. Nothing screams "I don't care!" quite like sending a typo-ridden note full of mistakes like using the wrong "your/you're" or neglecting to spend the extra millisecond to type "you" instead of "u." Urasek, a self-proclaimed "grammar Nazi," points out that proper grammar goes a long way online — and I wholeheartedly agree.

You might think, "How could my online dating profile possibly be unoriginal? It's all about me!" Unfortunately, stating your interest in generic things like traveling, exercise, and "having fun" makes you sound like a robo-human without any real personality. To counter this, Urasek suggests adding in details that make you uniquely you — some personal examples she gives include her love of things like Sour Patch Kids, down comforters, and hockey. If you focus on the little things that make you special, you'll be more likely to attract someone who's into you for the all the right reasons.

This is an argument I frequently have with my roommate, who chooses to mostly disregard that little number at the top of someone's OkCupid profile. Personally, I don't get it: Why would you talk to or date someone knowing that you disagree on important things, like religion, politics, or family values? Urasek admits she doesn't totally buy into the matching algorithm, but nonetheless recognizes its merits, saying she rarely messages someone back if they're less than an 80 percent match. If you have yet to do so, answering the match questions will help you narrow down your search, and find someone who you might be compatible with long-term.

The fastest way to ensure that you'll be alone forever? Open a conversation with something that clearly says, "Hey, you're nothing more to me than a potential sex object, how's it going?" It utterly baffles me why a man would think it's OK to ask me to blow them before they even know my name, but online dating truly brings out the worst in some people (probably because there's no accountability for their actions). Urasek sums up the formula for a winning opening message nicely: "Stay away from objectifying someone and don't rely solely on complimenting their physical appearance. Introduce yourself and say why you're interested in meeting that person, but don't write an essay."

6. Trying To Control Everything

At the end of the day, there's no way to make sure that things go exactly as planned. While you might think someone's profile is amazing and that they're your soulmate, you can't control how others feel about you: Attraction is something that can't be forced, and it's unwise to try. All you can do is put your best foot forward, both online and IRL, and hope that you find someone with whom you have a good mental connection and chemistry. A good rule of thumb for gauging interest that Urasek offers: "If you send two messages and someone doesn't respond, move along and assume they're not interested."

More like this
12 Anti-Valentine’s Day Memes For People Who Are So Over Romance
By Meghan Bassett
30 Sweet Valentine's Day Caption Ideas For Long-Distance Relationships
By Syeda Khaula Saad and Carolyn Steber
50 Valentine’s Day Instagram Captions To Post If You’re Single
By Jessica Booth, Lexi Inks and Carolyn Steber
Here’s What TikTok's "Mascara” Trend Is *Really* About
By El Hunt
Get Even More From Bustle — Sign Up For The Newsletter
From hair trends to relationship advice, our daily newsletter has everything you need to sound like a person who’s on TikTok, even if you aren’t.