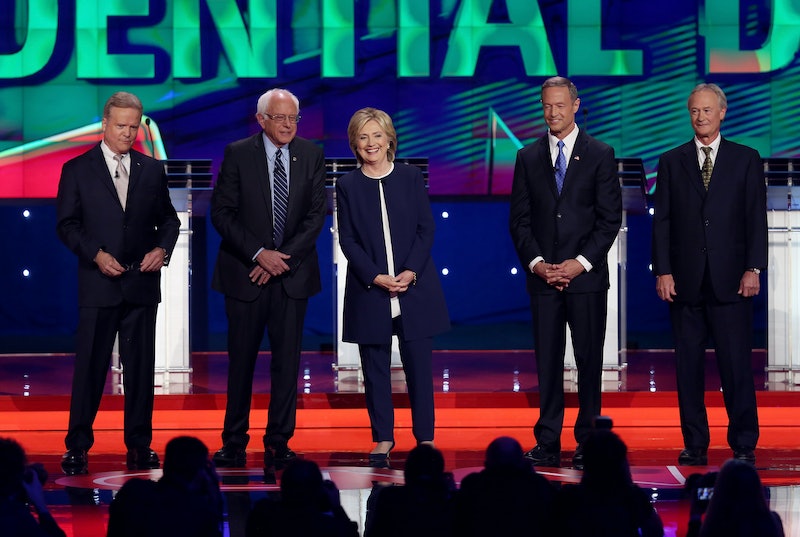 If you followed along with GOP bingo during the first two Republican presidential debates, you likely filled up your card within seconds of mentions of "Planned Parenthood," "abortion," and "unborn children." Chipping away at reproductive rights has become the hallmark of the Republican Party, whose latest crusade is to completely defund Planned Parenthood, which would limit access to contraception and other health care services to millions of American women and men (federal funding is not directed toward abortion services). As the GOP squarely places reproductive rights on the chopping block, it's the Democrats who've been safeguarding a woman's right to choose — whether it's going on birth control, having an abortion, or having children. Yet reproductive rights were sorely missing from the Democratic debate Tuesday even though the Democrats have lauded themselves as the party for women. Is the War on Women — a term the Democratic Party coined against the GOP — finally over, or has a new one begun?

While the Republican debate was brimming with references of the deceptively edited "sting" videos targeting Planned Parenthood, those discussions were overlooked among the Democratic candidates Tuesday night. In defense of the Democrats, perhaps not much needed to be said; all five candidates onstage are ardently pro-choice, and would have little to no differing opinions on abortion, birth control, or funding for Planned Parenthood.

But it was also a missed opportunity to sort through all the misinformation about abortion procedures; those propagandist videos; and just how Planned Parenthood uses its federal funding. During the last Republican debate, candidate Carly Fiorina described an abortion as, "a fully formed fetus on the table, its heart beating, its legs kicking," an assertion that was blatantly false.

Fiorina claimed that scene was in those "sting" videos — except it wasn't. And while it should be common knowledge that abortion procedures don't require fully formed fetuses kicking their legs on exam room tables, abortion remains such a polarizing and emotional issue in America that it's not unusual for these myths to be taken as gospel by culture warriors in positions of power.

How refreshing would it have been if Clinton or Bernie Sanders or Martin O'Malley used their power to wipe some of those myths away? Wouldn't it have been wonderful if Clinton clarified what an abortion procedure entails, or if Sanders reminded America that a congressional committee recently ruled Planned Parenthood did not break federal law? What if O'Malley took the time out to explain how federal funding is used at Planned Parenthood, and how accessible contraception and health care directly impacts women's livelihood?

To be sure, the first Democratic debate of the season did touch upon one reproductive rights issue that often gets lumped into a different category: paid family leave. The United States is just one of three nations in the world that lacks mandated paid family leave for new parents — a glaring disparity that has angered feminists for decades.

On this issue, Clinton decided to challenge Fiorina, a paid family leave opponent who claimed in the last debate that mandated leave would be bad for business. "When people say that, it's always the Republicans or their sympathizers who say, 'You can't have paid leave, you can't provide health care.' They don't mind have big government to interfere with a woman's right to choose and take down Planned Parenthood," Clinton said. "They're fine with big government when it comes to that. I'm sick of that."

It was the only time reproductive rights was mentioned during the entire debate, receiving one of the loudest applause of the night. It wasn't a perfect response, but in many ways, it was a telling one. By connecting paid family leave to abortion rights and Planned Parenthood funding, Clinton not only showed how these issues of family planning and economics are related, but also exposed the new Republican agenda: anti-women from the boardroom to the bedroom.