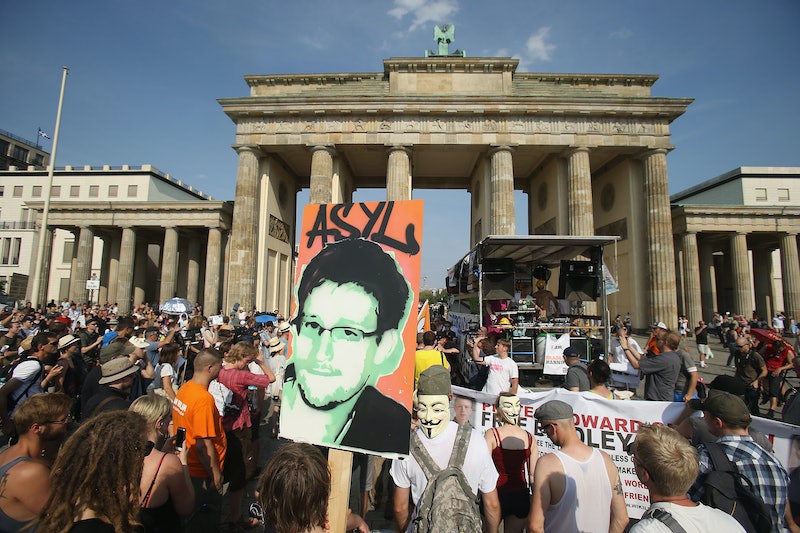 New year, new start? The editorial boards of the New York Times and the Guardian are hoping it'll be just that for Edward Snowden. The media superpowers have supported Snowden's November appeal for clemency in editorials calling for a reduced punishment for the ex-National Security Agency "whistleblower." Both editorials appeared online Wednesday night, and in print Thursday.

Due to "the enormous value of the information he has revealed, and the abuses he has exposed, Mr. Snowden deserves better than a life of permanent exile, fear and flight," the Times wrote.

The Guardian also called for reduced punishment for Snowden, calling the ex-analyst's decision to leak hundreds of thousands of classified files an "act of moral courage."

The Guardian, primarily journalist Glenn Greenwald, has worked with Snowden from the get-go to release the classified NSA documents. And although it was the Washington Post who was Snowden's American "partner," the Times has been supportive of Snowden's decision to leak the classified documents. Back in May, Snowden began exposing the mass surveillance programs conducted across America by the security agency, and has been avoiding charges of espionage by remaining in Russia under asylum ever since.

If clemency were to be granted, it would be a departure from the hard line the U.S. established in November, when President Barack Obama denied Snowden's request for clemency and told him to come back to the U.S. to face trial. Snowden wasn't too keen on that option, and remained in Russia, where he's been given asylum by Putin after a struggle to establish political refuge.

The New York Times wrote that a plea bargain would also be an acceptable option — something that would be relatively more appealing to the administration than dismissing the charges, essentially ignoring the leak.

As the Guardian points out, the public debate following the leaks has been extraordinary: the effects of that conversation triggered an Obama-commissioned NSA review that revealed the need for serious reform, and sparked contradictory judicial rulings on the programs' constitutionality, which are likely to lead to a Supreme Court hearing.

But whether Snowden committed a crime is not up for debate. White House senior advisor Dan Pfeiffer said in November that if Snowden had come before Congress to present his findings, it would have been a different story, thanks to an executive order President Obama signed to protect whistleblowers in the intelligence community.

But as the Times points out, that order wouldn't have protected Snowden: He was a contractor, not an employee. The two superiors Snowden did tell took no action.

“In retrospect, Mr. Snowden was clearly justified in believing that the only way to blow the whistle on this kind of intelligence-gathering was to expose it to the public and let the resulting furor do the work his superiors would not,” wrote the Times.

Snowden faces a federally-filed criminal complaint of two charges of violating the Espionage Act — a charge that carries a 10-year prison sentence apiece — and the government is likely to pile on more, should he be brought to trial. Writes the Times:

He may have committed a crime to do so, but he has done his country a great service. It is time for the United States to offer Mr. Snowden a plea bargain or some form of clemency that would allow him to return home, face at least substantially reduced punishment in light of his role as a whistle-blower, and have the hope of a life advocating for greater privacy and far stronger oversight of the runaway intelligence community.

The Guardian noted that even if Snowden is brought to trial, the jury could decide on a "jury nullification," meaning Snowden would be acquitted though technically guilty of leaking the classified documents — something that could be pretty embarrassing for Obama and co.

However, there is support for Snowden within the Obama administration. Some members of the NSA have said they'd be happy to extend amnesty to Snowden if he said he was done leaking their secrets — and Snowden declared "mission accomplished" a few weeks before Christmas, having sparked the debate he'd been hoping for.

“All I wanted was for the public to be able to have a say in how they are governed,” he said. “That is a milestone we left a long time ago. Right now, all we are looking at are stretch goals.”

Not long after the Times and Guardian editorials were released, an ex-State Department official from Obama's administration, Anne-Marie Slaughter, Tweeted her support for Snowden's clemency.