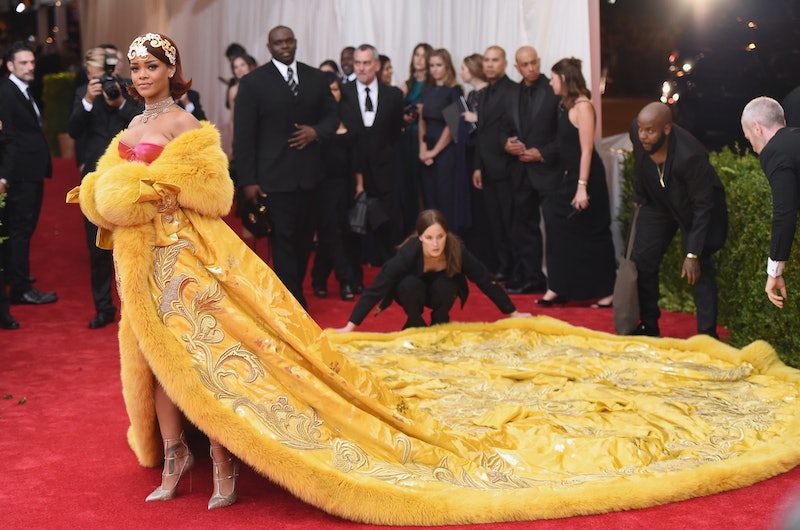 The Met Gala, which is the formal fundraiser for the Metropolitan Museum of Art's Costume Institute Exhibition, is always the biggest fashion event of the year. The couture dresses worn by the rich, famous, and stylish are talked about for months, like Rihanna's golden gown. The exhibit and the event share a theme. Next year's theme has been announced. Are you ready for it? The 2016 Met Gala theme is "Manus x Machina: Fashion in Age of Technology."

I'll give you a minute to digest that nugget of information.

It's a super modern and relevant theme, especially for the event, since to some, the idea of "a ball" might seem so dated and outmoded. Fashion followers know it's anything but, as the gowns that are worn are works of art. Still, applause, applause for The Met, as it's looking at the way fashion and technology co-exist in the digital age.

The theme opens up a lot of possibilities for the designers and the celebs who will wear their dresses. Will there be an onslaught of wearable tech? Who will take the theme too literally? Who will interpret it in unforgettable ways? I am already excited.

The 2016 Met Gala is set for Monday, May 2. Taylor Swift is a Met Gala co-chair, along with Idris Elba, Jonathan Ive, and Anna Wintour. Nicolas Ghesquière, Karl Lagerfeld, and Miuccia Prada are honorary chairs.

According to Vogue, the actual exhibit will focus on handmade haute couture vs. machine-crafted fashions. It will look a how things have changed since we are living in such an iWorld.

Andrew Bolton, the curator of the Costume Institute, told Vogue, "Traditionally, the distinction between the haute couture and prêt-à-porter was based on the handmade and the machine-made. But recently this distinction has become increasingly blurred as both disciplines have embraced the practices and techniques of the other."

The actual exhibit will boast 100 pieces of clothes, such as embroidered and pleated items made by hand that will live alongside things that were made via machine processes, like laser cutting, circular knitting, and thermo shaping. There will also be workshops, where visitors can see things like 3-D printing processes as they happen.

Man vs. machine.. interpreted through a fashion lens? Bring it, designers.

More like this
Here Are All 703 Outfits Rachel Wore On Friends
By Kat George
13 Nail Art Ideas Inspired By Every Song On Taylor Swift's 'Midnights'
By Olivia Rose Ferreiro
Behold: The Wildest Fashion Moments of 2022
By Dominique Norman
Twitter Can’t Get Enough Of Lewis Capaldi Creating Fashion Looks For ASOS
By El Hunt
Get Even More From Bustle — Sign Up For The Newsletter