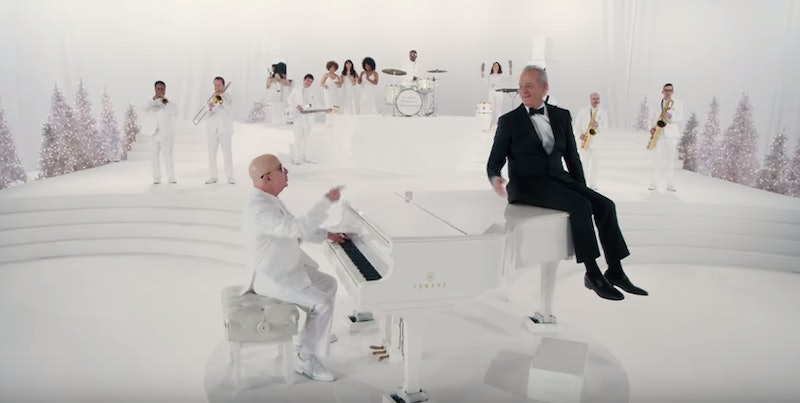 I know that none of us really needed another reason to watch Bill Murray's upcoming Christmas special that will air on Netflix, but I'm somewhat of an overachiever, so I've prepared not just one reason, but seven. Or, really, Bill Murray prepared them, since they're the most famous faces who appeared in the recently-released trailer for the aptly-named A Very Murray Christmas. Still, I'll take partial credit for taking the 30 seconds required to watch it and then screen-shotting their faces. It's a hard job, but somebody's gotta do it.

In case you aren't up to date on this project, it will be released Christmas 2015 (doy) on Netflix (ooh!) and stars Murray as Bill Murray, an insecure actor worried that, because of a snow storm in New York City, no one will show up to his Christmas Spectacular. Very meta, no? And, while I don't want to spoil the ending for you — and in fact I can't, because I haven't seen it — I suspect that everyone struggles their way through the blizzard, all miraculously turning up on Murray's doorstep right in the nick of time to save the show.

And just who are these guests whom Murray is so nervous won't be willing to slog through the storm? Well, if the first seven we're introduced to in the trailer are any indication, they're quite the star-studded bunch. Here's who we have so far.

Just having his annual Xmas Martini and flashing us those pearly whites.

Still in his coat and with a grumpy look on his face, so there's some potential drama here.

Perched on the piano singing, as you do.

Are those PJs I'm glimpsing? Be still my heart!

And this is just the beginning, so check out the trailer yourself for glimpses of Paul Shaffer, Rashida Jones, French indie-rock band Phoenix, and the influences of writer Sofia Coppola. A Very Murray Christmas indeed!