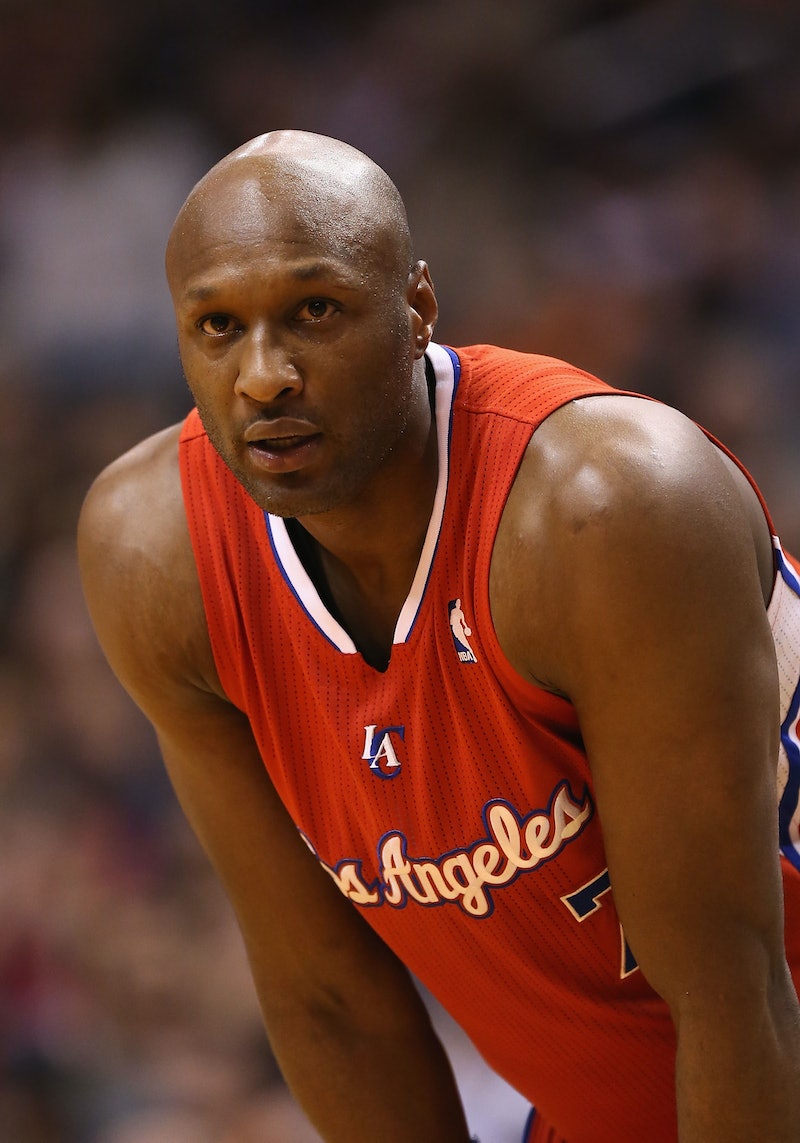 On Tuesday night, we were all saddened to learn that Lamar Odom had been found unconscious at a Nevada brothel, where he'd allegedly been partying on his own since Saturday. While the details regarding what actually led to his condition were not immediately clear (and still aren't), many have pointed to reports of Odom's apparent drug use, which have been circulating for years. Whatever was behind this tragic circumstance, one thing is for certain: Odom's condition after he was rushed to a local hospital was said to be incredibly serious, and the news has gotten no better overnight. The NBA player is now reported to be experiencing heart failure, as well as kidney and lung problems, and has been fallen into a coma, with machines regulating his breathing. Bustle reached out to his representatives for comment, but have yet to receive a response.

(Update #1: A source has claimed to E! News that "virtually every drug imaginable was found" in Odom's system, and that doctors are treating his condition as an "overdose." He is said to have suffered "loss of oxygen but also possible stroke" and that "likely there's brain damage, but they're not sure how much.")

(Update #2: On Friday, Odom’s aunt, JaNean Mercer released a statement to Us Weekly via her rep, Alvina Alson, claiming that Odom "gave a thumbs-up to the doctors this morning and said a few words to them” and that the family is "continuously praying and trusting in the doctors’ care.” According to Us Weekly, Alson also explained that she would not be answering any further questions about Odom’s health.)

It had previously been reported that Odom's ex-wife, Khloe Kardashian, has rushed to his bedside in light of the news, and her mother Kris Jenner — always an advocate of Odom's, even after he split from her daughter — was photographed looking distraught outside the Las Vegas area hospital where he's currently receiving treatment. It's unclear if any other members of the Kardashian/Jenner family accompanied Khloe to Odom's bedside, but their presence certainly drives home the seriousness of the situation.

While it would be easy to jump to conclusions in regard to the events which led to Odom's current condition, his publicist and friend Eve Sarkisyan issued a statement on Wednesday encouraging fans to forgo judgment:

"Family and friends are extremely concerned for Lamar. Please don't listen to the false information being circulated unofficially. Please respect the family's privacy during this difficult time."

However, as of Wednesday morning, TMZ claimed that hospital witnesses had reported that doctors discovered cocaine and opiates in Odom's system, as well as track marks on at least one of his arms. It's alleged that medical personnel have blamed the fluid buildup in Odom's lungs on his use of crack cocaine, but none of these reports have been substantiated or confirmed in any way.

Meanwhile, Odom's father Joe Odom told HollywoodLife.com that he's distraught over Lamar's condition, and believes that his son's condition is not the result of excessive partying, but rather that he was drugged by someone. While it's unclear whether Joe will be able to visit Lamar, he has urged fans to continue to send positive thoughts his way.

"Somebody drugged my son. There’s no way he’s down there partying like crazy like that. No way. I knew something was wrong because I’ve been calling him all day and he hasn’t been answering. I’m depressed right now — this is messed up! What can I do right now? That’s my son. I’m really hurt right now. This is the first time I’m hearing about it. Let’s give this some time. I pray that he will come out of this. I need all his fans to send him well wishes. If Khloe knows anything about this, please, tell her to call me. We all love Lamar and want him to pull through this."

Kendall Jenner was the first member of the Kardashian and Jenner families to break her silence since the news of Odom's condition became public. Taking to her Twitter page on Wednesday morning, she wrote simply, "Please don't go."