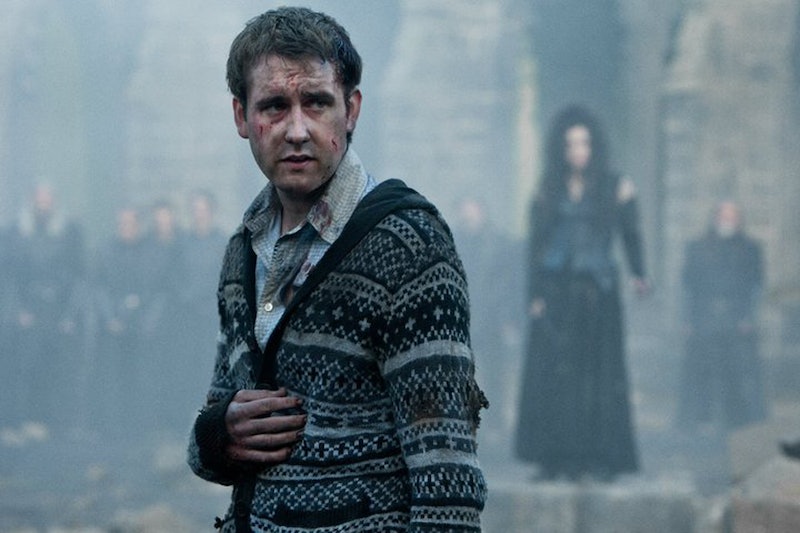 Most people agree that the golden trio in Harry Potter — Harry, Ron, and Hermione — pretty much define #SquadGoals. They’re all amazing characters, and most people’s go-to when dressing up for any HP-themed event. But beyond those iconic main three, there are some pretty amazing characters who deserve just as much recognition. I'm thinking Fred and George, the hilarious and ambitious comedy geniuses. Or Luna Lovegood, the quirky and confident Ravenclaw who was never afraid to speak her mind. Or what about Dolores Umbridge, the sadistic and horrible teacher who made you want to shatter a bunch of kitten plates? Just kidding on that last one.

But seriously, plenty of characters in Harry Potter who played a “smaller” role on page actually have a huge role in our hearts. And the number one character who is probably the best HP character of all? That’s right. It’s the “other” chosen one, Neville Longbottom.

You probably thought he was there just for comic relief when you first started reading — a toad named Trevor? Running off with the sorting hat still on his head? What a funny kid! How did he even get into Gryffindor, let alone Hogwarts itself? But then you kept reading, and you realized… Neville Longbottom is the absolute best of the best.

He Rises Above A Difficult Past

Neville's parents were tortured into insanity, he was raised by his domineering Gran, and he was seemingly told often that he wasn't worth much. Still, Neville didn't let those circumstances stop him from achieving so much, and if anything he used his difficult past to fuel his passion for a brighter future. And in the end, he turned around his situation: his Gran was bursting with pride for what her grandson eventually accomplished.

Even from book one, Neville was extremely loyal to Harry, Hermione, and the rest of those he called his friends. He attempts to warn Harry and Hermione when Malfoy tries to get them caught for helping with Norbert, at great personal risk (and ends up serving detention in the Forbidden Forest because of it). And he supports Harry when everyone else resists the claim that Voldemort is back. Neville's loyalty doesn't waiver, because he's a true friend.

He's First To Recognize The Greatness In Others

If there's one thing to be said about Neville, it's that he can see the greatness in others (even if he doesn't initially recognize it in himself). Remember the Yule Ball, when Harry and Ron couldn't seem to notice that they had two great girls sitting right in front of them that they could have taken as dates? Well, Neville noticed, and actually asked both Hermione and Ginny to the Yule Ball. Not at the same time (he is a gentleman); Hermione was already going with Krum, so Neville took Ginny. He saw that they were great women, even when Harry and Ron still had their heads in the sand about it.

He Is "Most Improved" When It Comes To Magic

There's nothing wrong with being "most improved," which Neville demonstrates. He's not so great at the lessons in the DA at first, but he constantly practices, letting his anger when the Death Eaters escape Azkaban fuel the fight against Voldemort. And his improvements are obvious: even Harry has to note the marked change. Take a page from Neville's book, everybody — practice makes perfect. You don't have to be great at something at first to succeed!

From the very beginning, Neville proved that he was totally unbreakable. After all, his Great Uncle Algie dropped him out of a window, and he bounced instead of breaking! Seriously, though, Neville did a ton of really stupid stuff throughout the series. He lost the passwords to Gryffindor tower, which allowed Sirius to break in, he was always losing his toad, he lost everything, really... but the point is, he didn't let those mistakes break his resolve. Neville just kept going, and he learned from his mistakes instead of letting them defeat him.

He Stands Up For What's Right

This kid stood up to Crabbe and Goyle, even though he was definitely not a match for them in a fistfight. He stood up to Harry, Ron, and Hermione, his only friends at school. He stood up to the Carrows, a horrible pair of Death Eaters. And then he stood up to Voldemort.

Neville may be scared of a lot of things, but he still chooses to fight. Isn't that the true definition of bravery? Maybe in the beginning we all thought it was crazy that Neville was placed in Gryffindor, but by the end, it was clear that he was the iconic Gryffindor student. After all, he's able to pull Gryffindor's sword from the hat and slay Nagini, proving that he is not only worthy — he's one of the best characters in the series. From toadless boy to Second Chosen One, Neville is a force to be reckoned with.