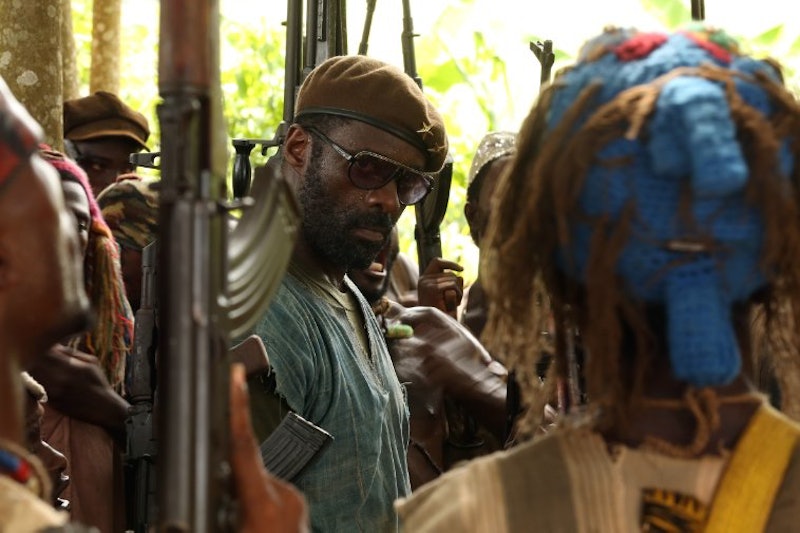 Before he came across Uzodinma Iweala's Beasts of No Nation — the novel from which his film draws its title — Cary Fukunaga had been circling around the vague idea of a project based in Africa. He traveled to Sierra Leone, according to the Wall Street Journal, and spoke with former soldiers, but couldn't quite muster a project. He went on to work on other directorial efforts, chief among them Sin Nombre, Jane Eyre, and the first season of HBO's True Detective. It was during his work on Sin Nombre that he was given Beasts of No Nation, and he seemed to have found the lens he needed to get the project moving. Fukunaga's film, like the novel it's based on, never situates itself in one particular geographical location, and the war and political situation it portrays are invented. But given the historical precedents for the events, and the political unrest often seen in the region of West Africa, it'd be reasonable to wonder if Beasts of No Nation is based on a true story.

Iweala'a film is an adaptation of his Harvard thesis, but the Nigerian writer never experienced the events he writes about in his novel. (Unlike, for example, Ishmael Beah's A Long Way Gone, a similarly lauded book about child soldiers in a West African civil war — Beah was a child soldier for two years during the Sierra Leonian conflict of the mid-'90s.) And the setting is vague for the fundamental reason that it doesn't matter where the conflict takes place. It's entirely beside the point to obsess over which actual conflict is responsible for the tragedies portrayed in the film. Beasts of No Nation, as its title would indicate, isn't about a particular war. It's not even really about war — it's much more fixated on the impacts of systematic violence on the children born into that system. Young Agu, the boy at the center of the drama, isn't a lens through which to examine the far-reaching impacts of war; he's a fully developed character that experiences these impacts for himself.

Iweala and Fukunaga are far from the first artists to give voice to the children embroiled in adult conflicts around the world, whether recruited to fight or just bystanders to the events. Nor is the phenomenon endemic to West Africa, though it's a frequent and unfortunate consequence of the highly visible civil conflicts in the continent over the past 50 years. These stories have been told as first-hand accounts by the soldiers themselves, by surrogate writers (Dave Eggers' What Is the What), and as fictionalized stories in the vein of Beasts of No Nation.

Allah Is Not Obliged, By Ahmadou Kourouma

Originally published in French as Allah n'est pas obligé, this novel plays out in Liberia, telling the story of a young boy named Birahima who is sucked into the civil war when his mother dies. Kourouma was a renowned Ivoirian writer who received the Prix Renaudot and the Prix Goncourt de lycéens, two prestigious francophone literary prizes.

The stunning debut memoir from former Sierra Leonian child soldier Ishmael Beah recounts his two years of military service as well as his time in United Nations refugee camps and his ultimate flight from Sierra Leone. Beah then published a novel entitled Radiance of Tomorrow, but A Long Way Gone still stands out as his most essential work.

What Is The What, By Dave Eggers

Dave Eggers, novelist, memoirist, and founder of McSweeney's, wrote a non-fiction novel based on the account of Valentino Achak Deng, a young Sudanese refugee and one of the "Lost Boys of Sudan." It spends equal energy describing the efforts of such a young man to assimilate in Atlanta, Georgia, where he finds himself after the war, and flashing back to his time in the Sudan. Eggers eschews his own distinctive voice, electing instead to try to tell Deng's story in his own terms (the result of years of interviews and close work).

Girl At War, By Sarah Novic

Girl at War, Sara Novic's first novel, tracks its protagonist across a decade, from her youth in war-torn Yugoslavia to her haunted adolescence as a student at a New York college. She returns to her childhood home to confront her demons, and in the process the novel reveals the far-reaching impact of a childhood infused with the violence of war.

China Keitetsi was conscripted into the National Resistance Army in Uganda at just eight years old, and her story is woven into the history of the Ugandan Civil War for over a decade. Since writing her memoir, Keitetsi has become an outspoken activist against child conscription in conflicts around the world.

Child Soldier: When Boys And Girls Are Used In War, By Michel Chikwanine

Michel Chikwanine, a former child soldier in the Democratic Republic of the Congo and current University of Toronto student, co-authored a graphic memoir based on his experiences with Jessica Dee Humphreys. It's aimed at a younger audience, intended to expose young people ages 10-14 to the atrocities of war in a way that they can understand. Graphic novels have also been used as a medium for other former child soldiers, including Christine Alaba, a former conscript of Joseph Kony's Lord's Resistance Army, who has written an online, interactive graphic account of her life.

While these books are all grounded in real-life situations and conflicts, unlike the vague horrors of Beasts of No Nation, they all serve a similar function of shedding light on frequently misunderstood and mythologized historical events. They give a platform for the children often enmeshed in these conflicts, permitting others to understand the events through a different perspective than they might otherwise be able to access.