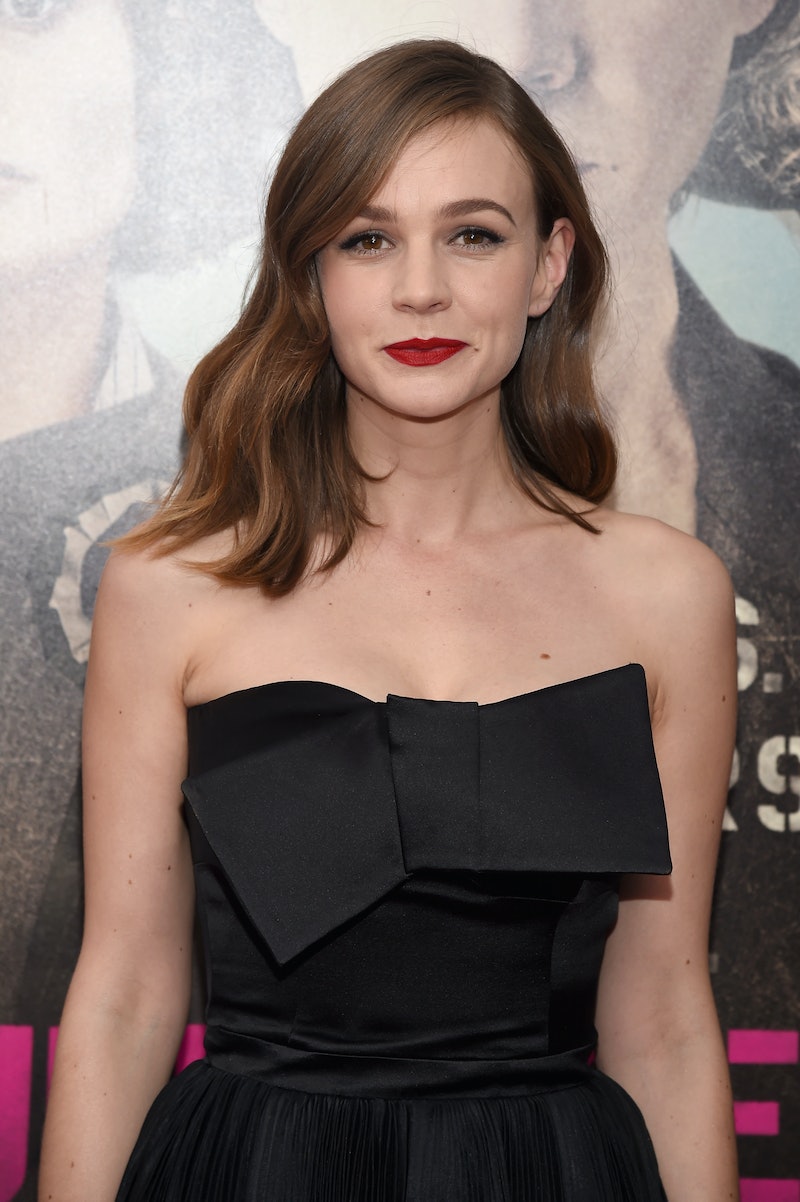 At the New York premiere of her new movie Suffragette on Monday, Carey Mulligan revealed her baby's name to Entertainment Tonight. As you might be aware, the 30-year-old actress is well-known for guarding her privacy pretty closely. She only announced her pregnancy this past June, and there was no formal announcement following the child's birth; only leaks to the media. That is, until last week, when the star confirmed on The Graham Norton Show that yep, she and her husband, Marcus Mumford of Mumford & Sons, had indeed welcomed their first child. “It is a girl and she’s three weeks old,” Mulligan told Norton. And now, she has a name: Evelyn.

When by ET what the inspiration was for the name, Mulligan simply shrugged. "I just... came up with it," she said. These days, the public has gotten quite used to celebrities giving their babies pretty unconventional names (ahem, North West). The gender-neutral name has also risen in popularity over the last few years. (I'm looking at you, Maxwell Drew Johnson and James Reynolds.) So it's almost more shocking when a star actually bucks the trends to give their baby a totally classic name, with absolutely zero weirdness to it. (You know, like Pilot Inspektor or something.) But if you were expecting the kid of Marcus Mumford to get a name like Banjo, you were probably surprised by something as classic as Evelyn. (Also, the name Banjo's already taken by Rachel Griffiths' son.)

Still, Mulligan and Mumford aren't the only celebs giving their baby a vanilla name. Here are seven other little ladies who were given similarly classic names by their famous parents:

Actors Jamie Anne Allman from The Killing, and her husband Marshall, from True Blood, were inspired by their daughter's due date of June 2014. Although she ended up being born in May, they stuck with the name.

Back in 2008, Tori Spelling and Dean McDermott welcomed their first daughter, Stella. (Not sure about you, but that sounds like the name of someone I'd give my seat up for on the subway.) And her little sister got the granny treatment, too: her name is Hattie Margaret McDermott.

The daughter of Reese Witherspoon and Ryan Phillippe (who is now 16, and a perfect blend of her gorgeous parents) was named after actress Ava Gardner. As her dad told People at the time, "To me, she was the only woman who could break Sinatra. So the idea of that name to me is very classy and strong."

Actress Amanda Peet and her husband, screenwriter David Benioff, couldn't agree on a baby name when their daughter was born in 2010; and things got pretty intense. "We couldn't leave the hospital because we couldn't decide what her name should be," Peet told US Weekly. "The car was downstairs and yeah, it was cutthroat. There were two, he wrote them down on a piece of paper, and then hid them behind his back. And that's how she became Molly June."

Olive is a pretty beautiful name, but it's possible Isla Fisher and Sasha Baron Cohen regret giving their first daughter such a plain name in 2007? Maybe, considering they did a complete 180 three years later, naming their second daughter Elula Lottie Miriam Cohen (Elula is the Hebrew word for August, the month she was born).

Actor Mark Wahlberg and his wife, Rhea Durham, aren't about to get crazy with baby names, either. Wahlberg's youngest daughter Grace Margaret, born in 2010, sounds like she could be a British royal. She's their fourth child; the couple also has another daughter, Ella, and two sons, Brendan and Michael.

Congrats again to Mulligan and Mumford, and I hope all of these kids grow up to be just as awesome as their names.