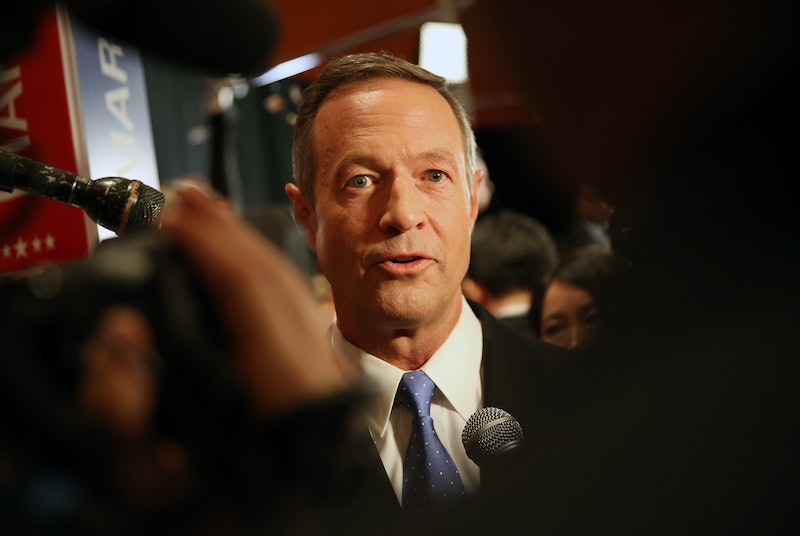 Viewers expected Hillary Clinton and Bernie Sanders to hold their respective courts during the Democratic debate Tuesday night, but perhaps what they did not expect was Martin O'Malley's resonating performance. The former Maryland governor shone in a few areas, one of which was gun control, an issue that plagues Sanders' otherwise pristine liberal record. Even against Clinton's powerful words on gun control, O'Malley stood out when talking about his record of fighting for gun control. But was it just exaggerated debate talk? After fact-checking his claims, it's clear that O'Malley has actually successfully enacted gun policies that are common-sense and effective.

When the topic turned to gun control during Tuesday night's debate, Clinton came out of the gate swinging, dropping the attention-grabbing statistic that 90 people die every day from gun violence. She also skewered Sanders for his soft position on gun control, bringing up his less-than-progressive voting record when it came to gun control legislation. However, Clinton's firm stance in the gun debate is platitudinous if compared to the concrete action that O'Malley as taken as governor.

O'Malley jumped into the debate by pointing out the gun policy package he enacted in the aftermath of the Sandy Hook shooting in 2012. In May 2013, O'Malley passed the Firearm Safety Act of 2013, which included a fingerprinting, licensing, and safety training measure for firearm purchasers, bans on 45 kinds of assault rifles and magazines that carry more than 10 rounds, and prohibited individuals who received probation for violent crimes from possessing firearms.

In response to Sanders' suggestion that it was more difficult to pass gun laws in a rural state (like Vermont), O'Malley argued that he did just that. He asked Sanders:

When Sanders then argued that O'Malley didn't have the resistance of a two-party Congress to contend with, O'Malley quipped, "That's a healthy thing."

Looking deeper at O'Malley's gun laws, how he was able to get them to pass, and his history with gun control in general, it becomes evident that he wasn't embellishing anything for the sake of the debate. Despite Clinton's strong stance, O'Malley is actually the only candidate who has successfully implemented pragmatic gun legislation.

On Wednesday morning, fresh off the debate, O'Malley made an appearance on CNN's New Day, and he elaborated more on his moment with Sanders and how he was able to pass gun reform in Maryland.

None of this is easy, and as I said to Senator Sanders, maybe it's actually healthy that I haven't been in Congress. ... We didn't get it done in Maryland simply by pressing a button or wishing it so. I had to overcome, oftentimes, big opposition in my own Party. ... What we did was we kept bringing people back to the table to the principle that we need to save lives.

Before the debate, at a campaign stop in New Hampshire following the Umpqua shooting in Oregon earlier this month, O'Malley referenced his gun laws in emphasizing the urgent need for similar measures on a more national level. He even seemed to preempt Sanders' Congress argument, talking about the resistance he faced from the NRA and even other Democrats.

He then called for similar gun reforms to be applied on the national level, which he also outlined in an article he penned for CNN in September. If he's elected president, O'Malley wrote, he promised to cut gun violence in half within 10 years. How? He proposed similar common-sense reforms to the laws he introduced in Maryland. These include a fingerprint-based license requirement for gun buyers, a ban on combat assault weapons, legislation that qualifies gun trafficking as a federal crime, and an agreement from the federal government to only purchase firearms from companies that carry the latest and highest-safety equipment, such as micro-stamped bullets that can be traced and serial numbers that cannot be effaced.

Nothing speaks louder than the concrete action that O'Malley has taken to implement gun control, but if something did, it would be his email back in June, which he sent to supporters in the aftermath of the Charleston church shooting. The subject line, which read, "I'm pissed," should have said it all, but in the body, O'Malley really drives home his take on gun violence.

It's time we called this what it is: a national crisis. ... This is not the America we want to be living in. I'm pissed that we’re actually asking ourselves the horrific question of, what will it take? How many senseless acts of violence in our streets or tragedies in our communities will it take to get our nation to stop caving to special interests like the NRA when people are dying?

During Tuesday night's debate, moderator Anderson Cooper asked each candidate who their favorite enemy was, and O'Malley, without hesitation, said, "The National Rifle Association." Given his track record, O'Malley has proved that he does not fear his enemy.