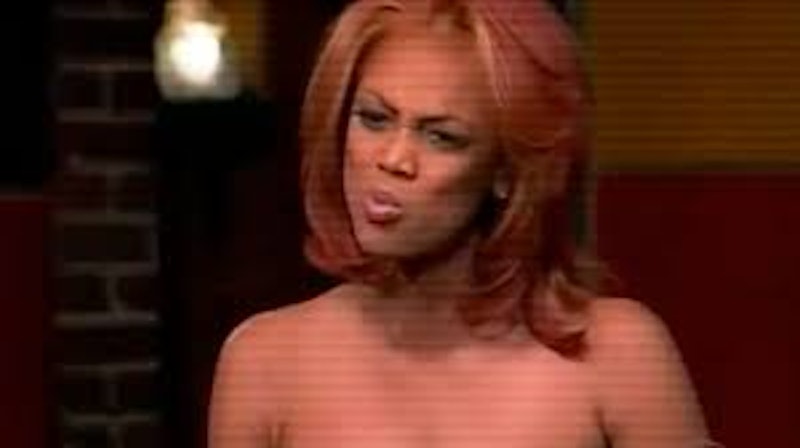 It's a truly tragic time for reality television. As reported by The Hollywood Reporter on Wednesday, America's Next Top Model is officially ending. The show will bow out after Cycle 22 (seriously, Cycle 22) which will mark the end of the show's 12-year run. It's pretty mind-blowing that the series lasted this long, until you consider the endless supply of absolutely insane (and often insect-filled) photo shoots, bizarre "acting" challenges, and juicy drama that was the life and blood of this perfect reality competition. And oh, was that drama glorious — though the show was great when it had the models duking it out, I think most of us would agree that our favorite scenes involved host Tyra Banks herself getting in on the action. I am, of course, talking about the argument between Banks and contestant Tiffany Richardson, which gave us perhaps the best minute of reality television ever to exist.

For those of you who don't remember that fateful scene from America's Next Top Model, it occurred in Cycle 4, back when ANTM was still a relatively new series. The episode focused on Robertson's attitude problem: she just wasn't giving it her all in the challenges, and seemed to be giving up on even attempting to win the competition. When Robertson was finally eliminated at the end of the episode, she seemed to shrug it off, joking and laughing with the contestants as she walked away. And that is when Banks, in all her redheaded glory, freaked the eff out on Robertson:

Banks' battle cry of "I WAS ROOTING FOR YOU! WE WERE ALL ROOTING FOR YOU!" has echoed in my brain for years, not so much in a way that encourages me, but in one that makes me terrified to cross Ms. Banks anytime in the future. Seriously — Banks really knows how to bring the shame hammer down on her contestants.

Of course, there is one big question that America's Next Top Model fans have debated since that iconic scene in Cycle 4: who was in the right? Was Robertson really being a spoiled, ungrateful brat? Or was Banks simply using Robertson as a lightning rod for drama? While that might be a matter of interpretation, Robertson did tell About Entertainment that she really did feel like Banks "loved" her, hence all the model-shaming:

It makes me feel bad watching it. I'm like, 'I was hurting this lady bad.' Some people say she was acting. But some people say Tiffany, you were being mean. But me and Tyra know. We've talked since. Tyra yelled at me because she loved some Tiffany. She wanted to see me just do so much better in the competition.

So, there you have it: it seems that we should have been on Banks' side this entire time. But just to make sure, let's watch the video another hundred times.