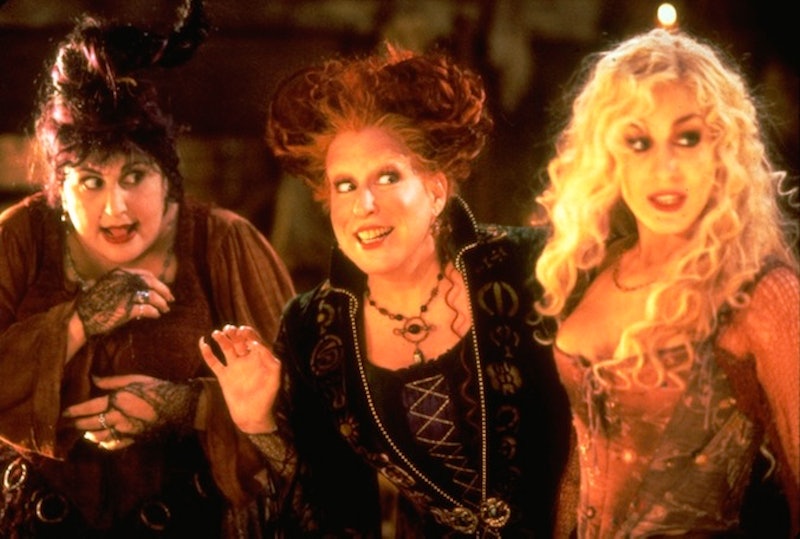 If you grew up in the '90s, Halloween was still the ultimate holiday (besides Christmas, of course). It was a time when trick-or-treating reaped you pillow cases full of candy that you'd be eating for months; a time when costumes were creative and over-the-top and took weeks to prepare. Most importantly, it was a time when Hocus Pocus was released, which was not only the best Halloween movie released up until that point, but it's still the best one today. Sure, it's not full of blood and gore, but it was still scary as hell to our child selves — and a lot of fun, to boot.

If you haven't watched it in a while, I heartily recommend you get a hold of a copy and get to it (though no doubt it should be popping up on TV at some point soon, if it hasn't already — I own the DVD, so I wouldn't know). What I do know is that anyone who's ever seen Hocus Pocus thinks it's as classic as I do, because... well, duh, it is. There are so many things to love about it, and while it might seem a bit dated (it is 22 years old now!), it's still the best Halloween movie you'll ever see in your entire life. Don't believe me? Here are 13 things to love about it (though really, there are hundreds).

Thackery Binx may have been a real boy once, but personally, I prefer him in cat form. Remember the scene where he gets run over by a car and Dani is completely beside herself because he's basically flattened in the road, but then he sorta puffs back into life like a balloon? AMAZING!

Every good holiday movie has to have some amazing music, and Hocus Pocus delivers on all fronts. From "Come Little Children" to "I Put A Spell On You", it's chock full of amazing songs.

The most memorable Sarah scene was definitely when she was thrilled to discover that she could walk through a puddle and not drown in it. However, pretty much every time she was on screen was magical, because she was great and Sarah Jessica Parker brought so much fun to the role.

I've always loved Kathy Najimy, but her crazy laugh as Mary always gave me the giggles as a kid for some reason. Even now as an adult, I remember how hilarious I found it as a kid and it gets me laughing all over again.

I love seeing adult actors in roles they had as kids. I don't know why, it just amuses me. Thora Birch grew up and went on to star in the likes of Ghost World and Colony, she was only about 10 in Hocus Pocus, and that's cute. Just go with it!

Winnie was the crankiest of the Sanderson sisters, for sure, but that's kind of what made her so amazing. She always had a smart remark or an eye roll to add to the situation, and that's why she was my favorite.

I'm an only child, so I was blissfully able to escape any sibling rivalry. However, Hocus Pocus kinda made me wish I had an older brother, at least for a little while, because of Max and Dani's banter. Instead, I went trick-or-treating alone around my grandparents' cul-de-sac. Womp womp.

You know he was, don't even lie. Omri Katz retired from acting 15 years ago, but thank god we have Hocus Pocus to look back on. It sounds creepy to say that Max was one of my first crushes since I'm now 31, but I was younger than him when it came out, so that's fine... right?

Bullying is a very serious issue and a terrible thing these days. Back in 1993, however, it was these yahoos who were mean and nasty for the time, of course, but also really kinda corny. They're so dated, and in 2015 they seem more hilarious than threatening.

The Sanderson sisters could only be brought back if a virgin lit this old candle, and of course Max did it. I don't think I really even thought much about what a virgin was when I was a kid, but looking back, it's pretty hilarious that this was part of a Disney movie, don't you think?

Billy Butcherson Not Putting Up With Winnie's Crap

Back in the day, Billy Butcherson and Winnie Sanderson had a bit of a dalliance, but things ended bad since she ended up sewing his mouth shut. He didn't take too kindly to that, even from his grave, and his decision to go against her and help Max, Dani, and Allison was totally cheer-worthy.

The Sisters' Fear Of Everything Modern

When you've been asleep (or otherwise indisposed) for the past few centuries, things are abound to get a little confusing when you wake up. The Sanderson sisters' confusion about pretty much everything about them is hilarious... and totally understandable, to be honest.

I mean, that needs no explanation, right?

Every movie needs a happy ending (at least every Disney movie), and seeing Thackery Binx being released from his cat purgatory and able to rejoin his sister is about as happy as it gets for a Halloween movie.

And for more Halloween, check out Bustle's YouTube channel:

More like this
22 Movies On Netflix That Are Perfect For The Whole Family
By Bustle Editors
Reese Witherspoon Gave Fans Hope For 'Legally Blonde 3' After This Surprising Movie Inspired Her
By Jake Viswanath
At 28, Lesley Manville Was Acting, Picketing, & Singing Kate Bush Songs
By Olivia-Anne Cleary
The Biggest Differences Between 'Bullet Train' & The Book It’s Based On
By Arya Roshanian
Get Even More From Bustle — Sign Up For The Newsletter