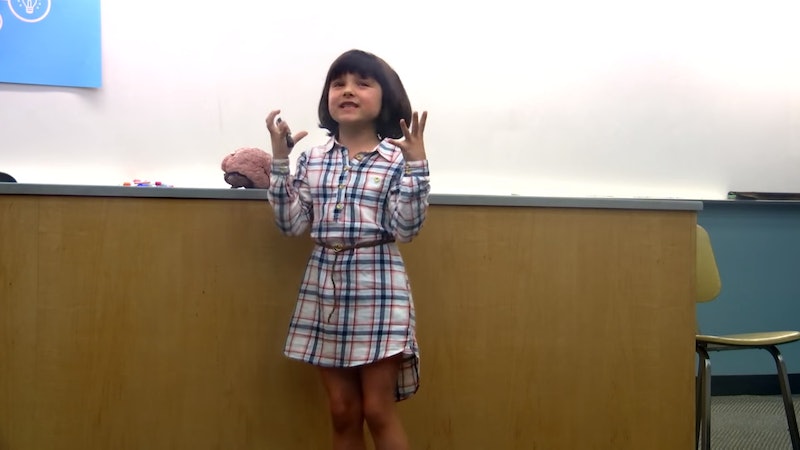 Last week, Mattel dropped a new promotional Barbie commercial called "Imagine the Possibilities" on their YouTube channel. And man, is it touching people's hearts. The video, which was shot using hidden cameras, according to the video's description, asks the viewer one simple question: "What happens when girls are free to imagine they can be anything?" The clip follows five little girls as they act out grown-up roles in the real world, and it has some pretty darn adorable results.

First, we open with a college classroom. Students file in, and eventually, a little girl who's maybe eight years old marches to the front of the room. Heads turn, and unsuspecting students look appropriately confused. The girl confidently and authoritatively introduces herself as "Gwenyth, your professor for today." Gwyneth next tells her class that she "will be talking about the brain," which causes them all to break out into some pretty wide grins. Honestly, I'm really wishing I was in that class, because that kid is everything, and I don't even care if she knows actual facts about brains or not. Teach me your ways, Professor Gwyneth. How are you so confident and sassy? How can I be more like you?

Next, we meet Doctor Brooklyn, a veterinarian who proves her credentials to her patients by showing off her handmade name tag. "Doctor" is scrawled in marker on card stock affixed to her lab coat. (Sure!) But it doesn't end there — one by one, we see a new little girl performing another impressively grown-up role. There's a motivating soccer coach, a (not-so-knowledgable) museum tour guide, and some sort of businesswoman talking businessy things in an airport. We know that she's a businesswoman because as she's happily chatting on her phone, we overhear her tell the caller, "I got that new business I wanted." Yep, she's pretty boss.

The unsuspecting adults in the video are happy to indulge the kids, too, overlooking all the blatant unprofessionalism — like when Doctor Brooklyn falsely claims that cats can fly (oh, if only), or when the tour guide incorrectly identifies a triceratops as being "one years old," and a tyrannosaurus rex as "one thousand, two million, two hundred, and fifty-two years old." That's not even a real number, lady! How did you even get this job?

The twist, of course, comes at the end, when Professor Gwyneth asks her class to answer a question about brains, and it's revealed that she's actually been imagining the entire thing all along. In truth, she's right in her bedroom, lecturing a bunch of her Barbie dolls in makeshift cardboard seats. It's like the M. Night Shyamalan movie of doll commercials. The message is then spelled out for us: "When a girl plays with Barbie, she imagines everything she can become." ... Aaaaand cue the feels.

The video ends with some throwback Instagram photos of the various professions Barbie has donned over her decades-long career. And she has definitely gone places. From the fearless Astronaut Barbie to the whip-smart Paleotologist Barbie, many of her career moves have been pretty progressive. Some others, however, have not exactly been met with the same kind of ... enthusiastic response. Take last year's Entrepreneur Barbie, who boldly commanded the board room ... while donning a sexy, skin-tight dress and sparkly necklace, of course. As Salon's Sarah Gray pointed out at the time:

Entrepreneur Barbie is modern woman with her smartphone and her tablet stuck in a sexist, outdated, dangerous representation of femininity. I take umbrage with the fact that, even though this doll is backed by an awesome group of diverse women — aimed at providing positive representation — Barbie still represents this problematic view of women (objectified by men in Sports Illustrated).

OK, so maybe Mattel's message hasn't hit the mark every time, but it's clear that the company's goal is to show girls that they are not bound by anything — not even their own imaginations. And what could be better than that? According to Barbie's creator, Ruth Handler:

My whole philosophy of Barbie was that, through the doll, the little girl could be anything she wanted to be. Barbie always represented the fact that a woman has choices.

The final frames of the video brings Handler's message home, by ending with four powerful words: You Can Be Anything. To illustrate this point, we're shown photos of little girls being "anything," which includes an astronaut, a pilot, and ... a mermaid. (OK, so that last one might be a stretch — I'm pretty sure even little girls know they can't be mermaids — but hey, that's a little white lie that won't hurt anyone.)