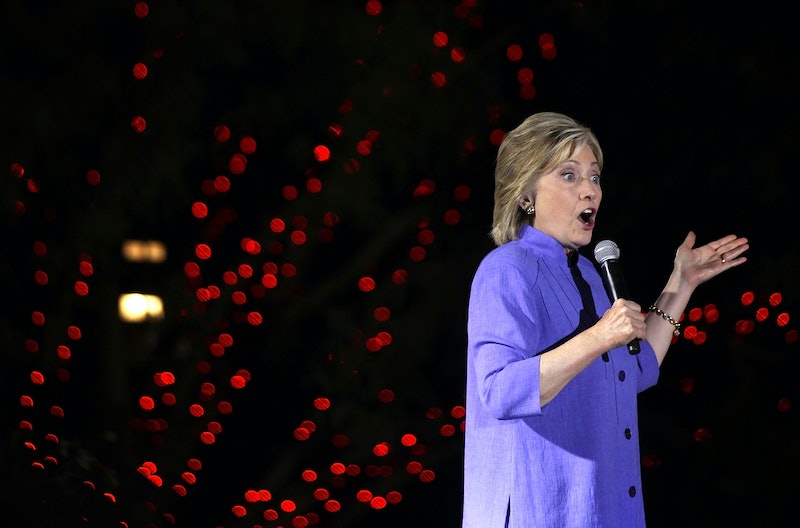 Days after the first Democratic debate of the 2016 presidential election, a new video campaign was launched by Hillary Clinton's campaign, entitled "Quick Question." In the ongoing series of videos, Clinton briefly answers upbeat and largely lighthearted questions about her time in politics, her family, and her personal beliefs. Posted on Clinton's Facebook page and YouTube, the videos are less deep dives into policy and more a means to spotlight Clinton's personality, and stories we haven't yet heard.

In one video, published to YouTube Monday, Clinton is seen recounting a fun story about meeting a world leader for the first time. She discusses her first encounter with the former Prime Minister of Bulgaria before a meeting she attended as Secretary of State. The former PM told Clinton he had heard that when she wears her hair up, it's an indicator that she's is in a bad mood (Clinton apparently had her hair pulled back for the meeting). Clinton says she responded, "Well actually, it's a bad hair day."

Other questions Clinton has answered for the series have included "What was it like moving Chelsea in to her college dorm?" and "What was some of your mom's best advice?" The objective is for voters to get to know Clinton on a personal level, and see a softer side that won't necessarily always be accessible in standard interviews (and certainly not during the debates). Prior to her campaign strategy shift to seem more open, Clinton had been typically reserved when it came to the media, and has now shifted her behavior to appear as approachable as possible.

Meanwhile, Clinton posted a "behind the scenes" video before the Democratic debate last Tuesday, and on her Facebook, she has posted a vintage black-and-white photo of her parents in which her father wears his military uniform.

Clearly, Clinton and her team want voters to feel as though we're getting to know her as a candidate and as a person, and the "Quick Question" campaign is likely a good step in that direction.