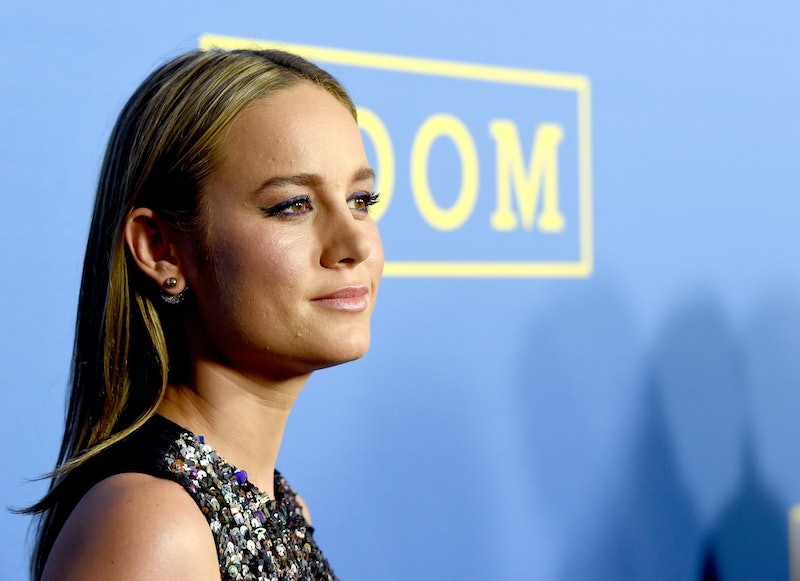 Brie Larson is staring at me with the intensity of a laser. We're sitting alone in a dark room at the Four Seasons Hotel in Beverly Hills, illuminated only by a photographer's studio light. It's an awkward space for an interview — a vacant room except for the single light and our two metal chairs, but she doesn't seem to mind. Brie Larson has just spent many months on a 10-foot by 10-foot sound stage filming Lenny Abrahamson's Room, so the small, dim, and barren surroundings don't seem to bother her at all.

But I'm sweating. I'm not used to the bright lights, nor the unique closeness to actors I interview, but she is clearly unfazed. I am tempted to overthink this room. Is it devised to get us in the mood to discuss the film, whose main character, besides Larson, is a tight, terrifying space? But that's where the similarities of this four-star hotel room and the Room stop.

Room is based on the novel by Emma Donoghue, and centers around a 17-year-old (Larson) who is kidnapped and taken hostage, hidden away in a 100-square-foot garden shed. After two years of isolation, her captor gets her pregnant, and she has a son, Jack (Jacob Tremblay). After she and Jack escape their captivity, Jack must adapt to the outside world for the first time as a 5-year-old.

It's a powerful film, perhaps the most moving picture I've seen in 2015. I tell Larson that after seeing it at the Toronto International Film Festival, I couldn't tear my thoughts away from it, even while watching other movies. "Wow, that's incredible to hear," she says, scooting closer to me. I ask her about becoming Joy, whom Jack calls "Ma," and she leans forward in her chair, elbows on her knees.

"Lenny and I spoke a lot about her past. Maybe she was a really good student, with parents that were together. She's an only child, she's on sports teams, maybe did some charity work, and was doing all the things you're supposed to do on the checklist to get into the good college. She had created a future for herself."

The novel Room is told entirely through the perspective of 5-year-old Jack, and the film honors this by giving Jack a vantage point, but it focuses equally on Ma. "I wrote journals for her. I made a journal for when she was 10, one when she was 14, and another when she was 16 or 17, to try and get in touch with what those periods of time felt like," Larson says. "What were the trials and tribulations? What were the body image issues? What about any nervousness about making eye contact with the boy you like, or your friends spreading rumors about you..." she says. "It took me back to a place that was so real for me."

Larson gave the journals to the production designer, along with a 10-year-old iPod she had when she was 16 — still filled with top 40 hits from the early '00s — photos of her adolescent bedroom, and posters she had hanging on her walls as a teen. Then, the production designer crafted Ma's pre-abduction bedroom, and Larson was only allowed to see it when the cameras were rolling.

"He was able to replicate certain, very specific things from my bedroom. Later, when we were filming the scene where I look through these journals, I was surprised to discover that going through them felt very empty," she says, punctuating every sentence with unblinking eye contact.

Ma would've lost connection to those journals, and so Larson did, too, because her physical and mental transformation into Ma was all-encompassing. She spent isolated time at her childhood home and limited her exposure to the outside world. She also altered her eating habits in an attempt to know what it would be like to eat a severely restricted diet similar to Ma's in Room.

"Initially it was just to slim my body down so I looked malnourished. I ate six small, bland meals throughout the day, and there was only two or three things I could eat. At first I liked it because I knew exactly what I was going to have, there's some beautiful safety in knowing exactly how much you're going to have and what time you'll have it, but then I started to feel trapped by it. There's a sense of frustration and longing — wanting something different and something more.

It was helpful," she says. "I could play that into the experience of knowing what it would be like for Ma in Room. The monotony."

Larson also utilized a physical trainer to help her become Ma. She did exercises to help her drop pounds, as well as build up muscle mass. "The muscle gave me this surge of testosterone where I just felt so much more power. I'm a pretty relaxed person, so it gave me this sense of urgency and strength to really fight that I had never felt before," she says.

Larson told Variety she spent six months of pre-production researching victims of sexual abuse and people confined for an extended amount of time. She even restricted her intake of vitamin D and other nutrients Ma didn't have access to in Room, according to the interview. This rigorous preparation to create Ma was indubitably successful, but with intensity of the material — becoming so deeply invested in becoming a young woman who spent 7 years of her life in a single room — Larson found herself being wholly consumed by the role, and needed small reminders of who she was outside of the role.

To remedy this, she says she asked that her family and friends call her constantly while she was on location, send her care packages with her favorite things, and on set, she even went as far as taking a piece of paper, drawing a line down the middle, and writing "Ma" on one side and "Brie" on the other. There, she listed the traits that were inherently hers versus Ma's. It helped her hold onto her sanity while filming.

It seems that all her hard work and intense mental and physical preparation will pay off — that is, if success can be measured in Oscar buzz. The overwhelming positive reviews and the aptly chosen late October release date make it so Larson can expect to speak on behalf of Room well into the new year and into award season. Throughout her ongoing press tour, the rising star has avoided addressing questions about potential award nods, opting instead to speak to the creative process of her character.

She's not yet a household name, but come February 28, that's likely to change.