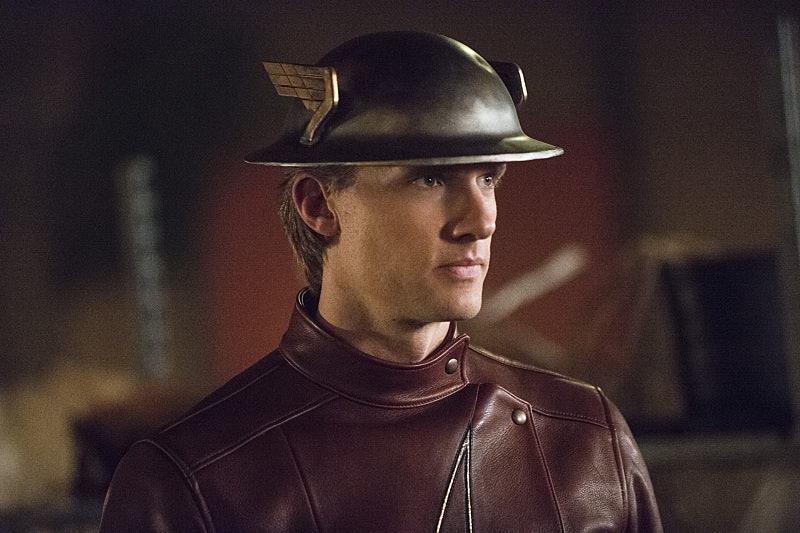 The Flash may have started a brand new season, but already it's showing similarities to Season 1. How so? Well, the series' initial run focused on the big overlying mystery of "Who is Harrison Wells?" and then that later expanded to, "Who the heck is the Reverse-Flash?" Season 2 has that same question, just with a different player. Who is Zoom on The Flash? I know we're only two episodes into Season 2, and we might not have met all of the major players in Central City yet, but I'm already willing to guess this new speedster's identity: Jay Garrick is Zoom. It sounds crazy, and it is. But it just might be crazy enough for to happen on The Flash.

I'm basing this entire theory off of one tiny moment in The Flash's second episode, "Flash of Two Worlds." Barry Allen and Jay have a heartfelt discussion about what it's like to be speedsters, and to go up against Zoom. For reasons unknown, Zoom wants Barry dead (it's starting to feel like all speedsters want Barry dead).

Jay and Barry talk about this, and during their conversation, Jay says this of Zoom, "he will do whatever it takes to be the only speedster in any world." And it was in that moment right there, I realized we were staring Zoom in the face. Watch the clip below.

Now, my evidence to support this.

Jay's Introduction Is Too Convenient

The Harrison Wells wound is still very fresh. Barry is still dealing with the betrayal from last season. So in steps another older, wiser figure to guide Barry on his path to becoming the fastest speedster of all time? It makes too much sense. We've already seen this happen, which is why it's highly suspicious. Add in the fact that Barry is clearly always searching for a father figure, and it seems like Jay fits the role a little too well. There's no way his time with Barry can end happily. He'll either end up dead or as Zoom — or both.

Surprise! Harrison Wells is alive and well in Earth 2. As far as we know, he is just plaid old Harrison Wells. While that could change, I don't think The Flash would reveal that the mysterious big bad is Wells again. They've already used that reveal and probably want to start fresh with this villain. If you agree that Zoom should be someone other that Wells, you'll realize that the remaining choices are very limited.

When Jay first shows up, Barry doesn't take a liking to him right away, and with good reason. He's finally learned that he shouldn't trust people right away. However, that doesn't mean Barry should immediately start trusting everyone after he's vetted them. Also, why has it not been addressed how Jay got into S.T.A.R. Labs in the first place?

Also it's way too convenient that Jay just casually knows how to throw lightning. Like he learned how to do it through a YouTube video on Earth 2.

His Powers Are Conveniently Missing

After Caitlin checks Jay out, she mentions that he doesn't have the Speed Force in him, which is what gives Barry his powers in Earth 1. But why doesn't Jay have his powers in Barry's world? He didn't get them the same way Barry did, and hasn't explained why going through time portals would strip him of his speed. It's very odd, and makes me think that Jay still has all of his powers intact, but has chosen not to reveal them yet.

Showing up in S.T.A.R. Labs powerless makes Jay seem a lot safer to Barry and everyone else. Had he appeared powers a-blazing, that might have raised a lot of red flags. Instead, his powerlessness makes him less of a threat and easier to trust.

His Connection With Caitlin

Based on a brief glimpse in the Season 1 finale, it seems like either at some point in the future or on Earth 2, Caitlin becomes Killer Frost, who is a villain in DC Comics. Meanwhile, present-day Earth 1 Caitlin has just lost Ronnie and is taking a liking to Jay. If Jay is in fact a bad guy and Caitlin really falls for him, it could be the push she needs to actually become Killer Frost. Or maybe they're getting along so well because Jay was friendly with her sinister alter ego in his world.

Zoom Has Yet To Be Cast

This is highly suspicious. Though an actor has not been cast to physically play Zoom, his voice comes from Tony Todd, and we heard it in last week's episode when he went up against Jay. If The Flash isn't revealing the actor behind Zoom, it has to be for a reason — perhaps because we already know the actor playing Zoom as a different Season 2 character.

Jay may seem innocent, but we shouldn't write him off as a suspect just because he doesn't have a secret evil lair (that we know of). Hopefully Barry truly learned from Harrison Wells and won't grow too close to the other speedster until he can figure out if someone else is under that Zoom mask.