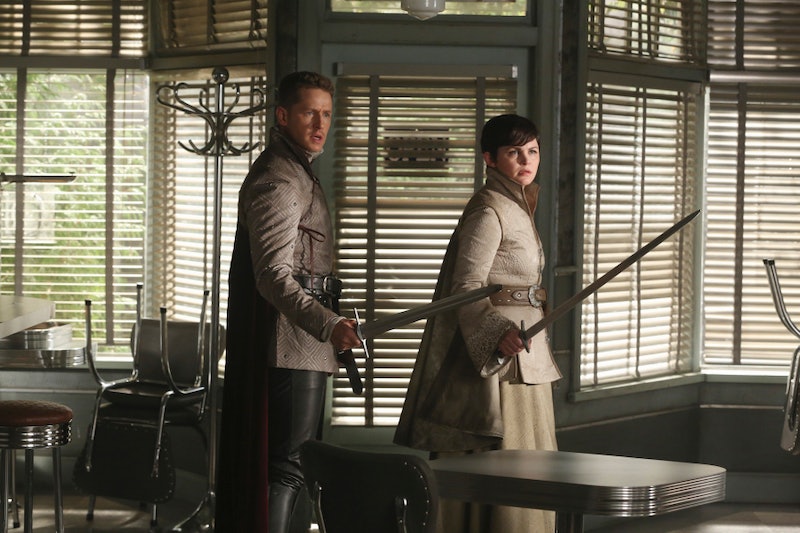 Well, we're only three episodes into Once Upon A Time Season 5, and things have already gotten Pretty Serious. Emma's given into her evil side as the Dark One, but that's only happened because Regina, Snow, Charming, and the rest of the Storybrooke crew failed her in some way in Camelot. What exactly they did to let her down remains to be seen (and it will eventually be seen), since Emma erased everyone's memory when she sent them back. We've been getting bits and pieces of those missing six weeks in each episode, and in a preview for "The Broken Kingdom", the fourth episode of the season, it's become increasingly clear that Emma's parents aren't dealing so well with their daughter's new role as the Dark One.

The clip shows Snow telling Charming that even though he's happy to bro out with Arthur, he needs to slow his roll because Lancelot says Arthur's not to be trusted. Charming wants to know how Lancelot even came back, considering the fact that Cora said he was dead, but Snow doesn't know and shouldn't have to. The bottom line is, Arthur wants the Dark One's dagger because he can "help" and Snow's not having it. We already knew that the fairy tale couple would be facing a certain amount of difficulty this season, but just how far will the wedge be driven between them?

Here's the thing: We know Arthur is up to no good, so whatever happened to Lancelot for all these years, he's right to tell Snow not to trust him. In "Siege Perilous", we saw him lead David on a wild goose chase which nearly cost him his life, all so Arthur could secure a magic mushroom that he pretended was lost to them both forever. He's also up to some shady stuff back in Storybrooke, though the others have yet to discover what his plan is. The audience hasn't even discovered it yet, other than Arthur proclaiming that he was going to set up a new Camelot in Storybrooke. I bet Regina's Spidey senses perked up when he spoke those words aloud, because as if she's going to let that happen?

Anyway, the thing is, Snow had a point in the clip above, calling out David for letting his judgment be clouded by his desire to have a bromance with Arthur. He's having a bit of a mid-life crisis and is desperate to feel like a hero again, particularly because he's anything but in the case of saving Emma. It's a natural response, but somehow Snow seems to be the one keeping her head here, and I don't know how Charming will handle that long term. Sure, Snow is the love of his life, her knight in shining armor, but will his desire to fit in with the Knights of the Round Table supersede his good sense?

Of course, it doesn't matter too much at the moment — Emma did a great job of wiping everyone's memories, which pretty much undid any progress Arthur made with David back in Camelot. However, they managed to find each other again in Storybrooke, and something tells me there's trouble ahead. Can Snow and Charming's relationship handle it? Probably yes, but I hope they let us sweat a bit before they ultimately resolve this tough situation.