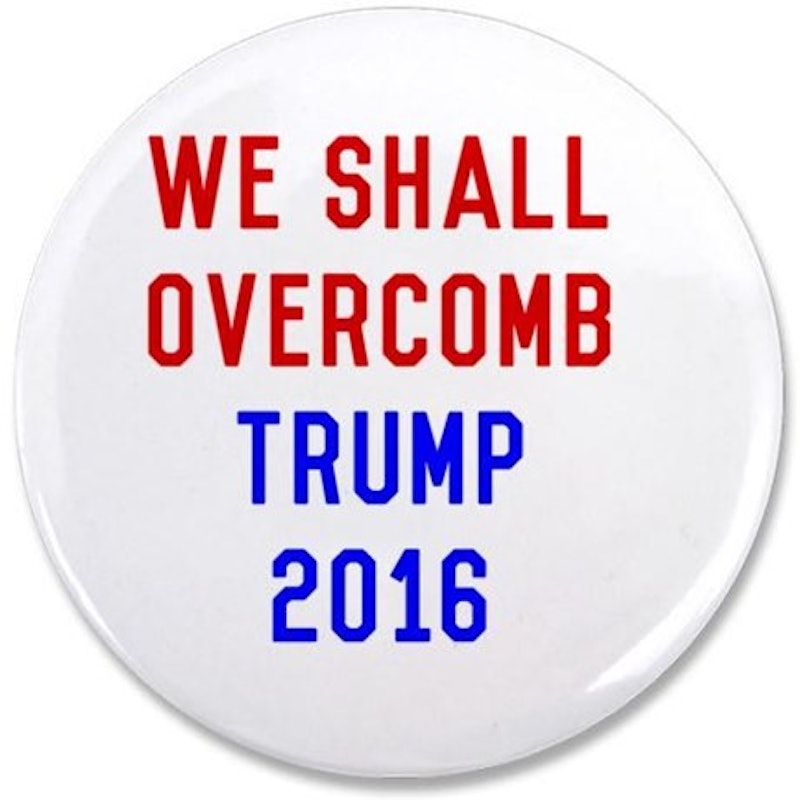 So, you may or may not have heard, but there's this "Halloween" thing coming up, and you'd do well to start getting ready. If you don't have a costume picked out already, after all, you might be falling behind some of your more motivated friends and loved ones, and you wouldn't want to be caught out without one. Luckily, it's also an election cycle year, which means there's a slew of politically themed costume ideas to choose from. And there's one candidate who's bound to be a popular choice — here are eight DIY Donald Trump Halloween costumes you can put together on the cheap, because believe me, that guy is not worth spending big money on.

Say what you will about Trump, and there are plenty of blunt, appropriately derogatory directions you could go, it's hard to deny that one of his central boasts is true — he's pretty keen when it comes to getting his name and image out there. Really, successfully party-crashing the Republican presidential race might be the most effective self-promotion he's ever embarked on, perhaps because he realizes what an attention-grabbing title "presidential frontrunner" is.

There's no inherent shame in dressing up as an unsavory person for Halloween, however, as long as you're remotely tactful and tasteful about it. Punching up rather than punching down, and all that good stuff. Here are eight possibilities you could go with.

So, you want the classic? No-frills, none of that high-minded, concept-Trump business? Luckily, you can pull off the basic Trump pretty easily if you've got a full head of easily disheveled hair and some spray-on hair coloring. But if not, just ind yourself a cheap, appropriately orange wig, and give it a little scissors-slashing until it looks right. The great thing about a Trump costume is that the hair doesn't actually need to be spot-on — just the fact that it's bad will let everyone know exactly who you're trying to be.

There are some core components you'll be seeing a lot on this list, and they're central to this simplest of costumes: If you've got suit pants and a jacket you can throw, that'll help the effect immensely. But even with no jacket, a tucked-in dress shirt, the hair coloring and/or wig, and a Trump button can do the job.

Whether you have a baby you want to dress up as Trump for Halloween, or whether you want to dress as a baby version of Trump yourself, this is an easy one to pull off. if you're dressing up a baby, don't use any wigs or hair coloring — that stuff is ultimately unnecessary, and it could irritate the little one. Instead, if you've got any dress-up clothes for them, throw those on — preferably an adorable mini white dress shirt and dark pants — and make sure you throw in a Trump pin. If you don't have the clothing, a faux-suit t-shirt or romper could also do the trick, as long as you have the button.

If you want to dress up as an adult baby Trump, the demands change — now you need the slacks, shirt, and preferably jacket, complete with the hair, and a pacifier and baby rattle.

Woof! Doggie Trump is a solid choice for all the dog lovers out there, although I guess someone who really loved dogs might bristle at the association. You don't want to spend too much money on any of these things, obviously, so a full-on dog mask is probably out, but if you have a pooch of your own you could print out a cheap, photo-paper dog mask and fasten it with string. Otherwise, you could get a cheap, nose-only mask, which'll go great with a suit and Trump pin, or even just a plain t-shirt — you can make your own Trump apparel by picking up some plain white t-shirts and painting them through a "TRUMP" stencil. Just be careful with that lettering!

Here's a fun, relatively easy idea! Step one, get a rectangular cardboard box that snugly, comfortable fits your head inside. Step two, print out a photo of Donald Trump from his former hit reality show The Apprentice, and glue it into screen position on the box. Step three, carefully cut out the eyes with a sharp blade, so that you can see out from the inside. Instant episode of The Apprentice, propped up on your shoulders! The great thing about this one is that it makes use of an unambiguous picture of Trump, meaning your clothing isn't that important — you could go all-black to add emphasis on the faux-TV, if you wanted.

If you've got some basic makeup ingredients to add to the suit/hair/campaign button troika, you're nearly in business for zombie Trump. A good zombie costume doesn't need to be gory if it's sufficiently gaunt or garish — you can even just load up on cheap eyeshadows, one dark and one pale green, to pull off the effect. The dark shadowing goes around your eyes for that sunken look, before fading into the sickly green palor that you can apply all over your face, to be easily washed off later. Obviously, the customary political business attire and Trump-styled hair is a must, and if you've got the urge, try groaning about "huge brains" now and then.

This one's easy, provided you've worked out the suitable Trump hair situation, and an eye-catching campaign pin — just throw on your skinniest of skinny jeans, a red and blue checkered flannel (because America, although any color checkered flannel will work fine), or as a convenient substitute, one of those suit-jacket-and-tie t-shirts you see every now and then.

Who could forget Trump's starring turn at the 2005 Emmy's? Well, lots of people, to be fair, but at least it gave us all a glimpse of his down-home farmer style — denim overalls, a too-tight white t-shirt, and a straw hat. This is a great costume approach, because you might already own the basic components — the straw hat is the capper, needless to say. It'll just be the Trump button you need, as well as a few well-practiced lines.

I'm willing to guess that Trump's midi-chlorian count isn't very high, but that doesn't mean you can't dress up like a low-rent Jedi Trump. Just find a robe — a bathrobe, whatever, any old thing will do — and preferably, drape it over a collared shirt and red tie. Then, get yourself a cheap lightsaber, and complete the look with a hairstyle/campaign pin combo.

More like this
Bustle Daily Newsletter: November 24, 2022
By Hayley Schueneman
'Waterloo Road' Is Back, With More Than A Few Familiar Faces
By Sam Ramsden and Vivian Iroanya
The 5 Best Chair Glides For Hardwood Floors
By Vanessa Spilios
These Restaurant-Quality Wine Sets Are Perfect For All Those Impossible-To-Shop-For People
By Jen Fiegel
Get Even More From Bustle — Sign Up For The Newsletter