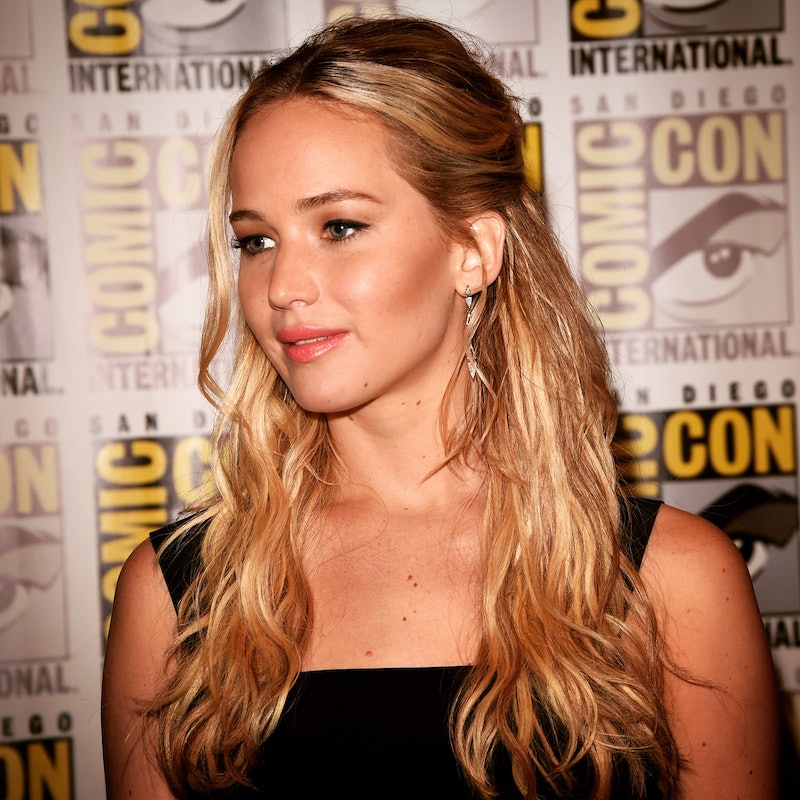 For the most recent issue of Lena Dunham's new newsletter, Lenny, Jennifer Lawrence wrote an essay slamming the wage gap in Hollywood as well as reflecting on her own internalization of sexist norms. Describing the Sony hack, after which Lawrence found out how much less money she was making than the men in the industry, she writes, "I didn’t get mad at Sony. I got mad at myself. I failed as a negotiator because I gave up early." Simultaneously, however, Lawrence explains her discomfort with being perceived as "difficult" or "spoiled" for speaking her mind — and Democratic presidential candidate Hillary Clinton applauded Lawrence for critiquing income inequality despite this discomfort.

In her essay, Lawrence points out that most men in her industry are negotiating important deals without worrying about coming across as "a brat" or "offensive." Toward the end, she makes it clear that she's going to stop trying to "find the 'adorable' way to state my opinion and still be likable," and to instead choose to stand up for her right to a fair share. It is this second point on which Clinton commended Lawrence. The Democratic candidate tweeted the essay on Friday, adding that "equal pay matters for us all."

It is Clinton's top challenger, Vermont Sen. Bernie Sanders, who has really zeroed in on economic justice during his campaign. Given, as Anderson Cooper pointed out during the first Democratic debate on Tuesday, that Clinton and her husband are part of the one percent, and has many significant ties to corporate institutions, she has a long way to go if she wants to authentically represent the other 99. At the same time, however, Clinton has made some powerful statements pertaining to income inequality, so it is not surprising that she would share Lawrence's essay.

Over the summer, Clinton warned against the dangers of the "shadow banking system," and called for the rise of middle class wages. As the only woman running for the Democratic nomination, Clinton has been especially been outspoken about the wage gap. At a Silicon Valley women's conference earlier this year, Clinton advocated for the closure of the pay gap.

Up and down the ladder many women are paid less for the same work, which is why we all cheered at Patricia Arquette's speech at the Oscars — because she's right, it's time to have wage equality once and for all.

Moving forward, Clinton will have to contend with the fact that she is reportedly paid hundreds of thousands of dollars for her speaking engagements, as well as her hefty donations from private corporations. For now, however, it is important to see influential women amplifying other women's voices and speaking out against the inequality that we all face.