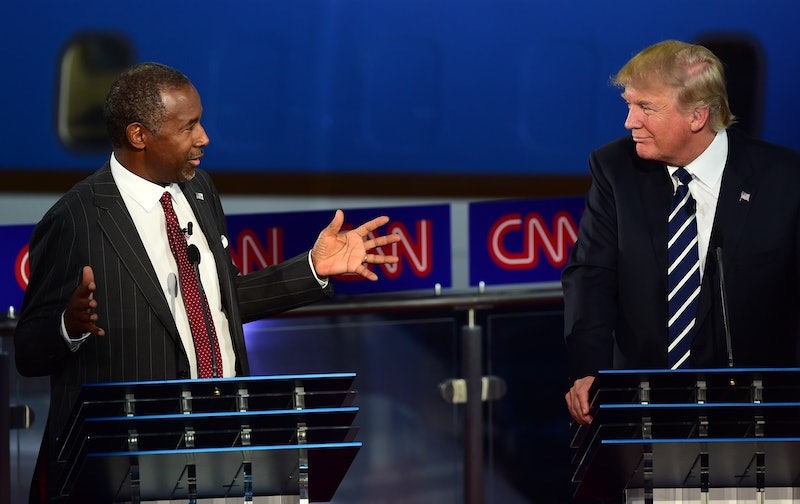 CNBC bowed to pressure from GOP candidates Donald Trump and Ben Carson on Friday, establishing new rules for the next Republican debate on October 28 that would impose an overall time limit while still allowing each candidate to give opening and closing statements. Earlier in the week, Trump and Carson had threatened to boycott the next debate unless those two criteria were met, writing a letter to CNBC officials in which they stated they would not participate in the debate if it was longer than 120 minutes, including commercial breaks. While the format has certainly limited the amount of response time for each of the Republican candidates, the new GOP debate format will actually be beneficial to those with shaky policies and little substance with which to back up controversial stances or statements.

Taking into account the 15 minutes allotted for commercial breaks, the 7 minutes for closing statements and the 11 minutes set aside for each candidate's open-ended question at the beginning of the evening (assuming there are 11 candidates on stage and assuming that they each get the traditional 60 seconds to answer), that means that, give or take a few extra minutes for spillover, the GOP candidates will have just over an hour and a half to debate one another on the issues — or, split evenly, about eight minutes per person.

Of course, none of it will actually play out that way, once things get rolling. Given the likely spread of talking time, candidates like Trump, Carson, Marco Rubio, Carly Fiorina, Ted Cruz, and Jeb Bush, who currently hold the top six spots in the polls, will dominate the majority of the conversation, leaving trailing candidates like Mike Huckabee, Rand Paul, and Chris Christie outside the spotlight.

So what does that mean for the ensuing conversation? To be sure, like previous debates, moderators will stick to the hot-button issues like immigration, gun control, abortion, and foreign policy — and while those topics are all important, they're also the most likely to garner talking-point responses. That's great news for candidates with little political no-how, like Carson, and even better news for candidates like Trump, who struggle to discuss delicate topics like Israeli-Palestinian violence, American involvement in Syria, or the real intricacies of a U.S./Russian diplomacy (there's only so much time you can dedicate to discussing how much you don't care about Ukraine, after all).

In the short time allotted to actually debate the issues, expect a few jabs from Trump at rival candidates and the usual one-liners about making America great again by beating China and the Mexican immigrants. Carson will predictably rattle off soft-spoken platitudes about religion's place in U.S. government and why Americans should have guns to fight back against the Nazis—or rather, the "unconstitutional" Muslim population. Jeb Bush will insist that his brother was a good guy, and Carly Fiorina will describe to you, in incorrect detail, how abortions are performed (which is unfortunate, given that she's one of the few candidates who has something of a handle on the issues). Ted Cruz will either blow a gasket or pound the podium as he rails about returning the country to Judeo-Christian values in an attempt to remain relevant. Marco Rubio will ineffectually offer up a few more palatable views on immigration before being dragged back into the shadows of people who are willing to use the term "anchor babies."

Will there be any actual substance at the next GOP debate? Not likely. With the decreased time limit and a massive field of incendiary candidates ready to to brawl over dried up aphorisms, it seems that the drought of actual political policy will continue until, over time, that field finally begins to shrink. Hopefully at that point there will be more than enough debate time for voters to suss out which candidates actually understand the complexities of the issues in front of them, and which ones are just repeating the same tired jokes.

More like this
BBC’s Gladiators Reboot Is Staying Close To The Original ‘90s Phenomenon
By Sophie McEvoy
Matt Hancock Broke a Major Rule With I’m A Celeb
By El Hunt
What To Know About Martin Bashir After Watching 'The Crown'
By Bustle UK
'Waterloo Road' Is Back, With More Than A Few Familiar Faces
By Sam Ramsden and Vivian Iroanya
Get Even More From Bustle — Sign Up For The Newsletter