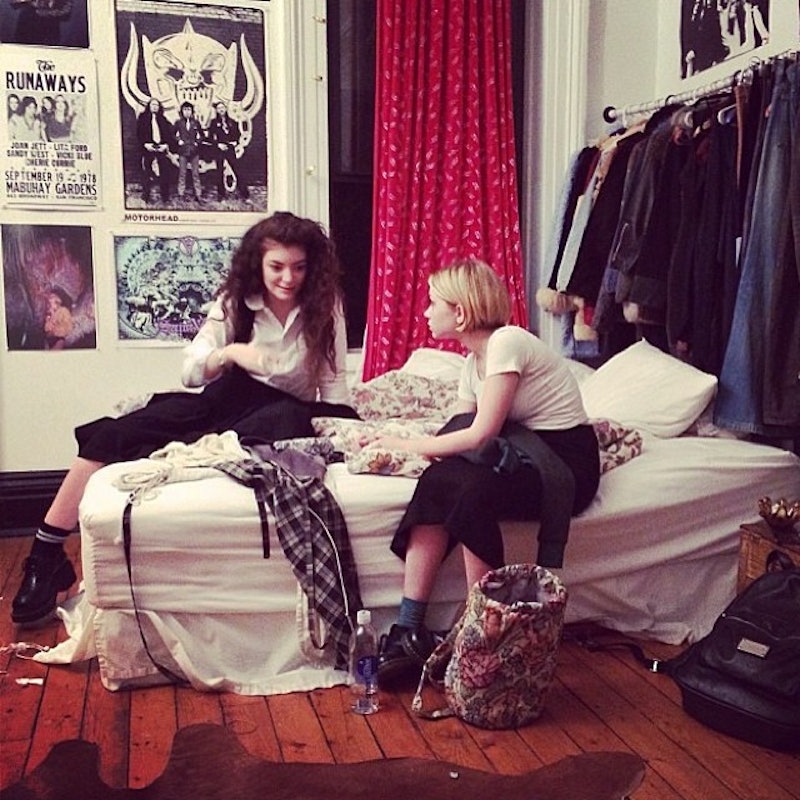 If you are a teenage girl on Tumblr, then you already know that on Thursday, the Internet exploded when Rookie editor Tavi Gevinson interviewed Lorde. The 11-page, 10,000 word piece was more of a conversation between the two 17-year olds (!) than an interview, and every word shared between the girls is smart, funny, and filled with more insight than most of us have ever had (or will ever have) in our lives. Damn kids.

Even if you're the age of Lorde and Gevinson combined, the girls' thoughts on society and success are still relevant. Whether it's the singer revealing the meaning behind some of her most cryptic lyrics or Gevinson talking the challenges of her day-to-day life, or both girls' fangirling over their shared obsession with people like Stevie Nicks and Taylor Swift, there's not one part of the interview that's not a must-read for all ages.

Practically every sentence in the interview could inspire a conversation, but one section in particular, when Lorde and Gevinson discuss the topics of age and fame, is especially notable. Below:

Gevinson: Does being singled out as the kind of outsider repping the “weird girls” ever feel like a double-edged sword? Because then you become responsible for representing the “real” teens… Sorry, that was just me talking to myself, ugh.

Lorde: [Laughs] No, it’s OK! I have definitely felt that sort of pressure, and it’s strange, because while I dress and talk somewhat differently from other people whose songs are in the Top 40, I feel like more people dress like me than the media makes you believe. You know what I mean? I’m not an anomaly, so it feels weird that I get treated like one and have that pressure of “You represent all teenagers in the Western world. No stress!” The easiest way of dealing with that is just to try not to think about what your art might mean for others. I know that sounds bad, but honestly, if you want it to be meaningful to other people, you need to just totally not even think about that part and make something that will mean something to you. Then other people will be able to live inside it too and understand it. But if you’re making something like, “This is for this demographic,” in the hope of “They will get this from it,” it’s not a healthy way of creating.

The girls revisit the topic later on, but it's this section of the interview that stands out. Gevinson and Lorde may be famous for very separate things, but both girls share a major similarity: being involuntarily appointed the "leaders" of every odd, intelligent, Daria-loving misfit teenage girl in the world. With Rookie and the fashion blog that came before it, Gevinson created a home for teen girls tired of being told how to look, think, talk, and act by Cosmo and Seventeen.

As for Lorde, just look at the way she dances to know that the singer doesn't fit in the typical teenage girl box. For both girls, being labeled as leaders certainly has its benefits; Gevinson, a senior in high school, likely has colleges begging at her feet, and Lorde, as she'll readily admit, is happily enjoying the financial perks of her success. Yet in this interview, Lorde and Gevinson admit that being leaders isn't all it's cracked up to be. As Gevinson says, it's a "double-edged sword" — and for two 17-year-olds, it can be a huge burden to represent every artsy outsider with Internet access.

What makes this section of the interview most interesting isn't the reveal itself (fame is hard, etc. etc.) but the fact that the girls speak about it with such candor. It's rare for celebrities — and yes, Gevinson, although not a Hollywood star, is famous — to discuss the downsides of their success at all, and practically never with such honesty. Those who do are labeled "whiny" or "ungrateful," and their fans typically turn their attention to stars "more deserving" of their fame. Katherine Heigl, Megan Fox, pre-Parks Rob Lowe — when they didn't appreciate their success enough, they felt the career fallout.

Yet Lorde and Gevinson have no qualms discussing the negative aspects of being in the limelight, and it's a decision we strongly applaud. Both girls clearly understand the obligations they have to their audiences, and they never come across condescending or naive. Instead, they approach the topic with honesty and self-awareness, critiquing the culture that labeled them "leaders" while acknowledging the connections they inevitably share with their fans.

When Lorde basically says "screw all of it, I make art for me," it's hard not to shout a resounding "YES!" Her sentiment may come off selfish to some, but it's acknowledging something that most celebrities never talk about — that when done right, art, no matter how much money and marketing go into it, is for the artist. The fans are important, of course, but really, they are just a byproduct. And so when a person like Lorde or Gevinson is told that she represents an entire community, simply by creating art that resonates with others, it's an honor, yes, but it's also a major responsibility.

So thank you, Lorde and Gevinson, for being some of the only celebrities to not be afraid of speaking the truth, no matter how "ungrateful" their comments may seem to some. Perhaps the rest of Hollywood can take a page out of the book of two 17-year-olds and start talking about the subjects that matter with honesty.