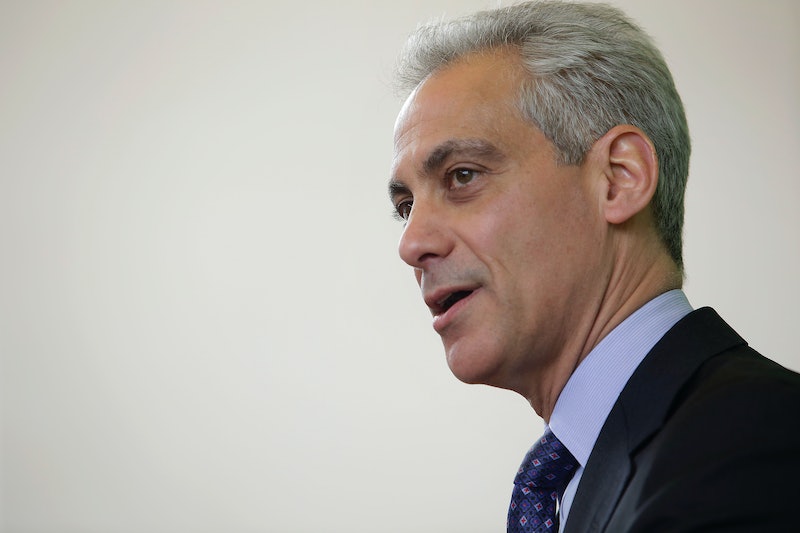 CBS radio affiliate WBBN reported this week that Chicago mayor and former White House Chief of Staff Rahm Emanuel had expressed concern for the local police force due to what he called the "YouTube effect." Emanuel said police were afraid of being recorded and were therefore unable to perform their duties out of fear that they could be the next name in news broadcasts. He added that officers' fears of being caught were at least partly to blame for Chicago's recent rise in crime. Emanuel's comments, however, were met with heavy scrutiny on both sides of the police brutality issue, with some angry at the Democratic mayor's implications that police were responsible for the crime wave. Whatever the case, it seemed as if Emanuel had missed the boat entirely.

"Officers themselves were telling me about how the news over the last 15 months have impacted their instincts — do they stop, or do they keep driving?" Rahm said in a meeting with Attorney General Loretta Lynch on October 7. "[They ask] 'When I stop here, is it going to be my career on the line?'" He added that the police had gone "fetal" and had pulled back from their "ability to interdict."

The backlash was swift. "They don't stop policing," Dean Angelo, president of Lodge 7 of the Fraternal Order of Police told The Chicago Tribune on Tuesday. "They're a very resilient group, [and] they're out there working their buns off, and [...] looking for a fair shake."

Chicago's uptick in crime over the past month and a half has been a bloody one. Since September 1, police have reported at least 60 homicides, with 14 civilians shot over a period of 15 hours alone and at least two young victims, a 14-year-old boy who died after being shot in a drive-by attack, and an 11-month-old baby who was struck in another drive-by shooting, but survived after quick-thinking officers rushed him to the hospital in a squad car. According to officials, it was the deadliest September since 2002.

"This has got to stop," Monique Williams, a relative of the 11-month-old, told The Chicago Tribune that month. "Our kids play up and down this street — now my son is scared, thinking someone might kill him."

Emanuel's comments this week only served as a reminder of the grim reality facing Chicago citizens, while simultaneously painting activist and lobbyist groups like the Black Lives Matter movement and the ACLU in a bad light, whether intentionally or otherwise. In recent months, both the BLM and ACLU have pushed for increased police oversight, with the latter unveiling an app in May that allowed citizens to easily record police on their phones (the video would immediately be backed up to ACLU servers, in case the phone was confiscated or damaged. Some law enforcement officers even got in on the action, instructing civilians on how to legally use their right to record.

"As a basic principle, we can’t tell you to stop recording," Delroy Burton, D.C. metropolitan police chairman and a 21-year law enforcement veteran, told The Atlantic back in April. He also encouraged citizens not to get too close to police situations. "Record from a distance, stay out of the scene, and the officer doesn’t have the right to come over and take your camera, confiscate it," he said.

This sort of civilian activism has yielded important progress in previous months, with high profile cases like that of black Chicago native Sandra Bland being forced to the media foreground, thanks largely to video footage of her arrest, which was taken by a bystander. Bland was arrested in Waller County, Texas in July under questionable circumstances after trooper Brian Encinia claimed Bland assaulted him during a traffic stop. Video footage later proved that Encinia had threatened and arrested Bland after she refused to put out a cigarette while signing her citation and that he had subsequently slammed Bland to the ground to place her in handcuffs. Bland was found dead in her Waller County jail cell three days later and Encinia was suspended.

With his comments this week, Emanuel demonstrated a lack of understanding on both sides of the anti-police brutality argument: certainly, proponents argue, recording encounters with officers should be encouraged. Without it, instances of blatant police abuse may be swept under the rug. However, Emanuel would do well to address the real root of police pushback (surely, not all law enforcement officers are guilty of bad behavior, but police leadership should understand that recording will not stop either way), rather than pointing fingers at both parties involved.

Instead of driving a wedge between civilians and police by claiming that the actions of watchdog citizens are to blame for police drawback, who are in turn blamed for the rise in crime, Emanuel should remember that his title implies a sort of peace-keeper responsibility to all parties involved. If he's hoping to stop his city from falling apart, keeping destructive ideas to himself is the least he can do.