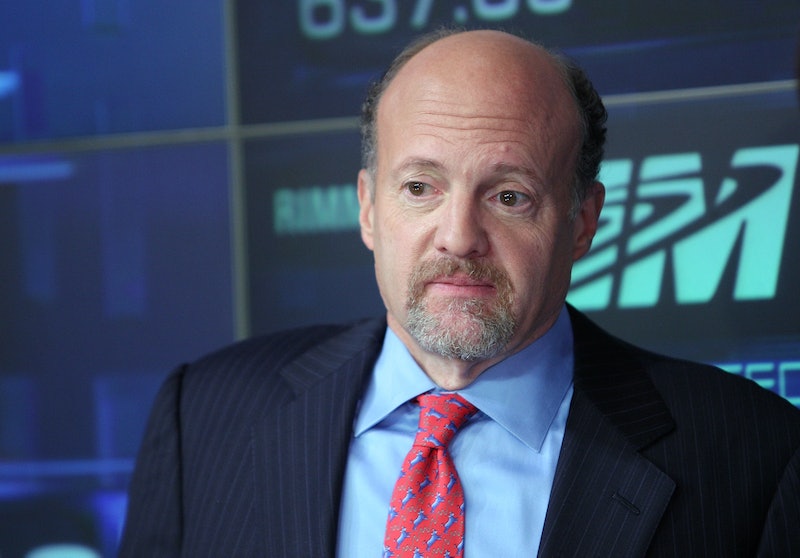 The third Republican presidential debate will be hosted by financial news network CNBC under the fitting tagline, "Your Money, Your Vote." As you might have already guess, the candidates will be forced to put some social issues on hold as they hone in on taxes, job growth, social security and all things capitalism. Fortunately for us viewers, and unfortunately for the Republican candidates, CNBC will be bringing on a panel of financial whizzes who can provide real-time fact-checking and analysis. One of those debate experts will be Jim Cramer, a longtime financial TV host known for his critical public remarks of members of the Republican Party.

Cramer, a Harvard-educated lawyer-turned-investor, currently hosts CNBC's Mad Money, which first aired in 2005. Despite the network's relatively small viewership, "Mad Money" is wildly popular, particularly for Cramer's entertaining zany style of delivering investment news and tips. Yes, he's that guy you've probably seen manically yelling, "Don't buy!" or "Sell! Sell!" And yes, Cramer uses a ton of sound effects, costumes and props during his segments, in a move not unlike his former comedy-political news counterparts Stephen Colbert and Jon Stewart. How else can you make investment news exciting?

Cramer has also faced off with Stewart, who once skewered him for giving viewers a false sense of financial security about the tumbling stock market in 2009. It was equal parts ugly and insightful.

So, who is Jim Cramer, really? The native Pennsylvanian started his career as a stockbroker with investment giant Goldman Sachs in the 1980s. He stayed with Goldman Sachs until 2000, and was also co-founder of the stock market news website TheStreet.

While it may seem like Cramer would be a conservative, considering his background in investment banking, the CNBC host is a Democrat — a fact that has irked conservative news outlets, blogs and pundits to no end. In 2012, Cramer publicly criticized Republican presidential candidate and investor Mitt Romney and predicted throughout the election season that Romney would inevitably get beat by President Obama.

Cramer's most scathing criticism of Romney came on an episode of "Meet the Press," when Cramer attacked Romney's track record at the investment firm Bain Capital:

Romney's known as a job destroyer, not a job creator. I just don't think that this will stick. I think Bain sticks. I think the idea that you bring in Bain, which is what happened in the 80s, they fire a lot of people and that's how they get prosperity for the rich. That is a more resonant theme, I think, than anything Romney's come up with.

Now, Cramer has become the target of Fox News, who reported earlier this month that Cramer's history of large donations to the Democratic Party makes him a conflict of interest in this next debate. And if the last presidential election in 2012 is any indicator, Cramer may have a ton of yell about following the upcoming CNBC Republican debate. Back in 2011, Cramer attacked the Republican candidates running at the time in a post-CNBC debate segment.

"I ask directly a question ... how about, basically, the markets... and their reaction is "grow the economy"?! How about "put away the bad guys"!?" Cramer said on his show. He added: "It's not bad to help business hire either... These people hate the government so much they make you think the government never did any good ever!"

Can we expect more of this? Let's hope so.