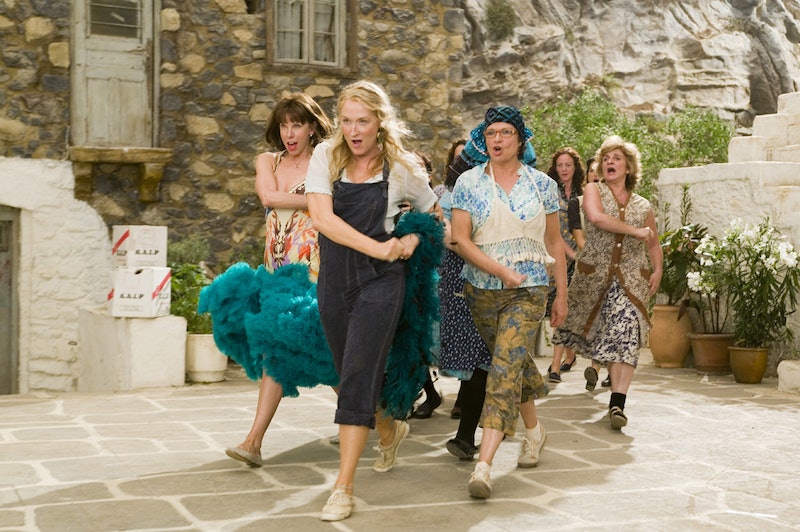 I love ABBA, and by relation, I love Mamma Mia!I'm talking about the movie (I like the musical, too, but the movie more), and I’d be lying if I said I hadn’t lost the respect of fellow film buffs by admitting to this fact. Yet I love the film because it ensures that I have a smile plastered on my face for 109 minutes, and that’s a sign of a great film. But upon a recent rewatch, I realized that Mamma Mia! is actually a pretty feminist movie in addition to simply being a fun one, and though I don’t need a reason to like what I like, the fact that a movie that brings me so much joy also has such feminist ideas makes my love for it even stronger.

If you’re like me and love this movie to death, but are constantly shamed for it by your peers, just whip out any or all of the below reasons why Mamma Mia is a feminist masterpiece. Next time someone criticizes the film or tells you to stop singing ABBA, show them this list — I bet they'll change their mind in no time.

1. It's Full Of Strong, Independent Women

Take Donna: single mother, business owner, badass babe extraordinaire who is fearless, hardworking, and so much more. Although she dreams about marrying a rich man and being financially stable, she doesn’t treat it as anything more than a happy fantasy to escape to, and is content with her success. Then there's Sophie: strong, independent, open to the world and yet fiercely confident about what she wants and deserves — she's unwilling to live her life any way but her own. And then, take Donna’s best friends: Rosie, a sassy, fun-loving writer who is unafraid and unashamed of being single; and Tanya, a serial bride who cares more about her looks than her friends and doesn’t give a damn about it because it makes her happy.

Donna has a past littered with various men, and she regrets none of them. Sure, like any woman raised in a patriarchal world, she has the occasional doubt about her past promiscuity, but her friends and daughter are always there to remind her that nobody should care how many men a woman has or has not slept with. The fact that Donna comes out a winner despite her past is a rarity in mainstream movies in which a woman is usually “punished" for having frequent sex.

3. Donna Is A Feminist Dream

The anti-slut shaming isn't the only reason Donna is a feminist dream. From the fact that she was kicked out of her family for her pre-marital pregnancy to the fact that she managed to start and run a successful hotel and raise a healthy, happy daughter to the idea that she's quasi-celibate just because she wants to, Donna is a champion for women. I’d be lying if I said I didn’t secretly envy the hell out of this woman.

4. It Discusses Being A Single Woman In A “Man’s” World

While Rosie is seemingly always happy being a successful, single woman, Donna is shown to face many of the problems that modern feminism fights for. The song “Money, Money, Money” is a great tongue-in-cheek example of how this movie jokingly — but powerfully — brings to the forefront very real problems like the wage gap.

5. It Plays With The Older Man/Younger Woman Dynamic

For once, this movie doesn't feature an older man chasing a young woman, but rather a young man panting after an older woman. And the woman, Tanya, openly revels in the attention, although she does make it clear in a very classy (and catchy) musical number that he's too young for her. Most movies with the older man/younger woman dynamic fetishize the female, but here, Tanya shuts that idea down with a sassy song and badass dance moves.

6. Sophie Epitomizes The Concept Of Choice

A big (and maybe my favorite) part of feminism is the idea that a woman can choose. She can decide to be single and without children or she can decide to take on a career and a family at the same time or she can decide to just sleep with a lot of guys and focus on her career — whatever her choice is, it's hers to make. Sophie goes through all of Mamma Mia! deciding that she wants to get married and have a big wedding, and at the last minute, decides that she doesn’t want that after all. She makes a choice that's totally hers, and is respected for it.

7. It Challenges The "Traditional Family"

The entire movie is filled with different ideas of family. First of all, there's Donna and Sophie, who are a mother-daughter team full of support and love for each other. Then there's Sam, who has two kids and is divorced. Along with Harry and Bill, he accepts Sophie as one third of his daughter. Sophie’s fiance, Sky constantly reminds her that her family is not limited to blood relatives, but is made up of everyone who loves her. And then there's the wedding, when Sophie makes the awesome decision to have her mother walk her down the aisle instead of a father who would only have been there as a token of traditionally.

8. It's All About Girl Power

From the very sweet and enviable mother-daughter relationship between Donna and Sophie to the intense support system of female friends who build each other up and never pull each other down, this movie is the best thing to happen to girl-/womanhood since the Spice Girls. It’s so refreshing to see some genuine female relationships featured on-screen, when in so many movies, they're heavily cliched or simply nonexistent.

Convinced yet that Mamma Mia deserves a place on the top of your re-watch list? It's time to see this movie for the feminist gem it really is.