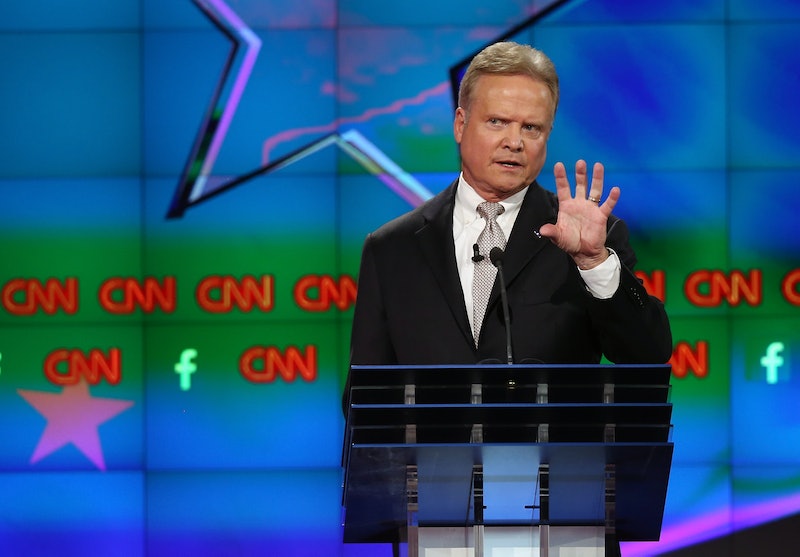 On Tuesday night, the first debate of the Democratic presidential primary season went down, and it brought some unexpectedly strange moments. Sure, there were some headline takeaways — upstart contender Bernie Sanders turned in a strong performance on the biggest national platform his views have ever had — and some frontrunner flubs, like Hillary Clinton's widely criticized, misleading comments on Edward Snowden and whistleblower protections. But the most awkward subplot of the evening is actually still ongoing: Jim Webb is still whining about the Democratic debate.

During the debate, Webb frequently took some of his time to, well, complain about his time. Thanks to social media, it's arguably been the most-remembered aspect of his performance, although his fond recollection of fighting an enemy soldier in Vietnam was certainly up there too.

Time after time, when Webb would be called on by CNN's Anderson Cooper to speak, he'd first direct everyone's attention to the fact that he wasn't getting to talk enough. At one point, Cooper even chided him, saying "you agreed to these rules, and you're wasting time." Webb didn't let it go there, though, complaining that "this hasn't been equal time."

Speaking at an appearance at the Council on Foreign Relations on Thursday, as detailed by The Hill, Webb made it out like his debate performance, which has broadly been perceived as poor, was simply a matter of him getting frozen out. In short, he's claiming the game was rigged.

I’m going to be very frank, it was rigged in terms of who was going to get the time on the floor by the way that Anderson Cooper was selecting people to supposedly respond to something someone else said. It’s very difficult to win a debate when you don’t have the opportunity to speak the same amount of time on issues as the others did. It’s a reality that the debate was being portrayed as a showdown between Mrs. Clinton and Bernie, but if you’re going to be invited to participate and people are going to judge whether you, quote, ‘won’ or not, at least you should be able to have the kind of time that’s necessary to discuss the issues that you care about, that you’ve worked on.

Fortunately, this isn't left to guesswork. According to The New York Times' post-debate breakdown of each candidate's speaking times Webb actually didn't get as raw a deal as he could've — Webb spoke for 15 minutes and 35 seconds, considerably more than Chafee got, bringing up the rear at just 9 minutes and 11 seconds. All in all, Webb spent about 45 seconds of that time on stage complaining that he wasn't getting enough.

Now obviously, Webb's time did pale in comparison to Sanders and Clinton, there's no denying that — they both spoke for about 30 minutes, with Clinton getting the most. But when you consider that Webb's campaign is practically invisible, however — as ABC News details, he doesn't even have any offices in Iowa or New Hampshire — the complaints start to seem a little egregious.

By multiple accounts, Webb is practically running a phantom campaign, and when you compare to a pair of hard-charging contenders in Sanders and Clinton, it was probably naive for Webb to expect completely equal time just based on the principle of the thing. Honestly, considering how few debates the Democrats even have scheduled this election — just five more, at this point — I could've done with a little less time devoted to Jim Webb presidential fan fiction. It's impossible to say how Lawrence Lessig would've fared if he'd made the cut, but it almost certainly would've been more intriguing.

In any event, it'll be interesting to see whether Webb gets a shot at an encore. The next Democratic presidential debate won't come until November 14, and suffice to say the moderators will be well aware that he could end up getting a little grumpy about thing.