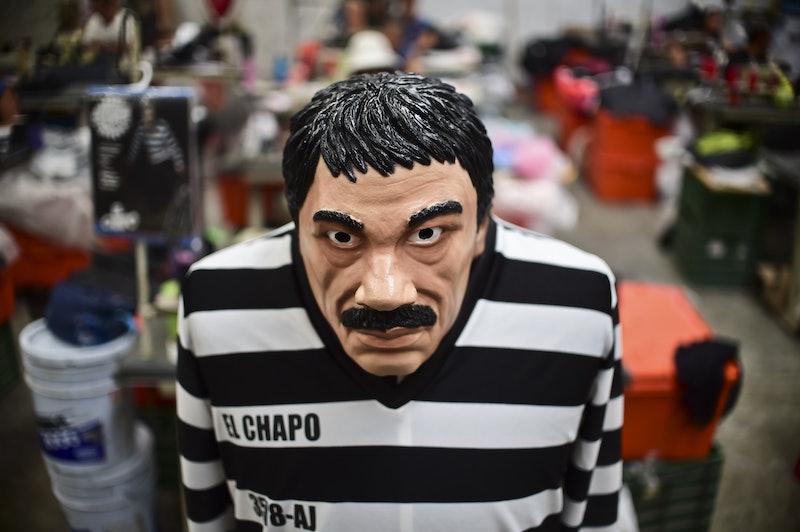 Mexican authorities came close to capturing escaped drug kingpin El Chapo on Friday, but he reportedly evaded police and injured himself in the process. According to The New York Times, Mexico's national security cabinet confirmed that authorities found the drug kingpin, whose real name is Joaquín Guzmán Loera, hiding out in northwestern Mexico. However, Guzman was able to flee before authorities could catch him.

Officials added in the statement:

As part of these efforts and thanks to intelligence and information exchange with international agencies, operations have been carried out across the country. As a consequence of these actions and to avoid capture, in recent days the fugitive made a hasty escape, which, according to information, caused him injuries in one leg and in the face.

Authorities also wouldn't say how they were able to track down the notorious drug kingpin, who escaped from Mexico's most protected maximum security facility in July. Guzman reportedly fled the prison through a massive underground tunnel that led to a construction site nearly a mile away. Video footage from his last moments in the prison show Guzman exiting his cell through a hole in the shower floor, which opened into the elaborate tunnel.

Guzman has been on the run since escaping the heavily protected facility. The drug kingpin was in prison since February 2014. Before that, Guzman was originally arrested in 1993, and escaped from a different maximum security prison in Jalisco in 2001 by reportedly hiding in a laundry cart, which sent authorities on a 13-year manhunt.

Trump called on the FBI to investigate the threat from the account allegedly affiliated with Guzman. However, it's unclear if the threat came from Guzman himself. The tweet was reportedly sent after Trump commented on the drug kingpin's escape, using it as fodder for his immigration platform, which includes a plan to build a wall between Mexico and the United States.

Now that Mexican authorities have tracked down the whereabouts of Guzman, military presence is intensifying in the villages in the Sierra Madre mountain range. The Los Angeles Times reported that over the last week, hundreds of people were forced to leave their homes as military operations were carried out in the region. "Military personnel from Mexico City are working in the zone," Sinaloa state Gov. Mario Lopez told reporters this week, adding that catching Guzman was "the objective of this group."